My bf’s youngest (eight) has to do free writing every single day. When he is with us, he was driving me NUTS with his, “…but I don’t know what to write!” and shutting down pretty much any suggestions me and his dad made. So, after two weekends of this (his mom is a saint obviously) I was entirely exasperated.

So off to Pinterest I went! I found some age appropriate writing prompts to write down on strips of paper. Then, after I asked every family member (local and far away) to participate by giving me prompts to include, and including blank slips for him to get his mom to give him some prompts…I had so many that I had to find something bigger! I found an almost empty tissue box. I pulled some of my Star Wars paper and hastily (the top is not as well done as I would like) double taped the outside. The kid and I agreed upon some rule, I wrote the down and stuck them to the outside. I then threw all the suggestion slips inside.

I actually wasn’t sure how he would take it. His dad was skeptical. He can be…picky. So, I was ecstatic when he took right too it. With almost a sigh of relief! His first writing suggestion was, “You find a cave inside of a tree. Tell us what is inside.” He wrote a page and a half in less than a half hour! Then he quickly went on to the next on! I was jumping for joy on the inside! Bonus! Last week they had teacher/parent conferences. Both mom and dad mentioned the suggestion box to his teacher…and she loved it! Yay! 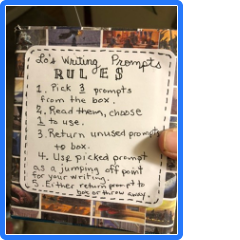 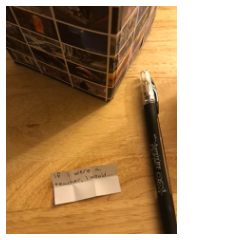 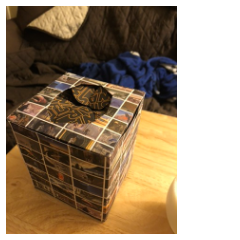 I love this so much! Go you!

What a great way to give him some choice along with finishing the task! Clever!

What a clever idea!

I can see something like this to help people focus in other ways as well!

This rocks so much!!

Necessity, or frustration, is the mother of invention! I will need to make something like this for my girl when she gets home from March break. She is always asking me for drawing suggestions, pick a word, pick a veggie, etc. Cool idea

This is a fabulous idea! Creative people often need some parameters in which to create. I am glad that this is working as intended.