Xenomorphs Are For the Birds

I made this for @EriChanHime in the Hoopless Hoopla swap. One of her themes was horror creatures doing cute things, and she listed Xenomorphs (from the Alien franchise) as one of her favorites. I found a cool print on Etsy that I bought and used as my base. 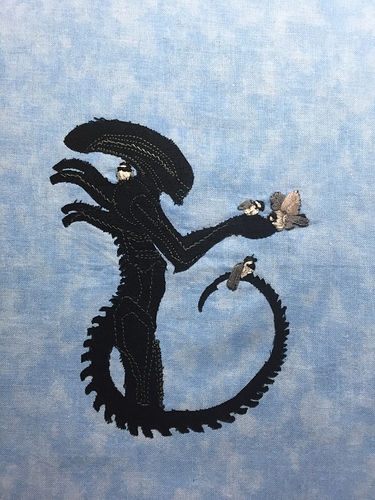 I ironed Wonder Under to some black fabric and ran it through my printer. Then, I cut it out using small, but sharp, scissors. I also printed the image out on some Sulky Solvy. Using a light box, I lined it up as best as I could, then used my machine to stitch some of the details on the Xenomorph. Then, I used 5 colors (and 2 hours) to stitch the wee chickadees by hand (the smallest is about 1/4", and the biggest is no more than 1/2").

I have another one ready to be cut and stitched for myself! As soon as I came up with the idea, I knew I was going to have a hard time sending it away, so I made 2 copies of everything when I printed on the Wonder Under and Sulky Solvy.

This is awesome. Thank you for sharing your process too. It turned out amazing.

This is so good. What a sweet Xenomorph!

Aaaagghht! I’M SO JEALOUS! This is fabulous.

This is one of the most rad things I have ever seen in my life.

Congrats! Your Xenomorphs Are for the Birds is one of this week’s featured projects. You are so awesome!

It’s fantastic!! And what a great idea to make two at a time!

Thank you everyone! I usually don’t like to make duplicates of things, but I’m excited to make one for myself!

This is one of the most rad things I have ever seen in my life.

Congrats! Your Xenomorphs Are for the Birds is one of this week’s featured projects. You are so awesome!

Oh my goodness! What a nice surprise after a long, exhausting day. The happiness will carry me through the rest of the week

Thank goodness for the small, extra sharp scissors! You did a great job cutting all the tail spikes. And the bird stitching? Very nice! I like your choice to have the alien cupping the birds - good choice for a horror creature doing something cute. As for the stitching on the alien - WOW! It truly added the perfect finishing touch!

Thanks! But the image with the birds came from an Etsy seller. I did purchase the image, but chose to render it in fabric and thread instead of simply printing it out

This is amusing. But what would H.R. Giger think of it?

I hope he would have appreciated it!

I just saw you posted this! I love it so much!