I’ve had this idea in my head since the summer of 2020, when we were stuck at home, and the closest we could get to the beach was sitting in our closed balcony (not sure what it’s called in English) with a view of the sea a few kilometers away. We spent a lot of afternoons there, reading books, crafting and drinking fruit shakes. We dubbed it Corona Beach.
There’s a very famous Israeli movie, where one of the characters at some point says he can’t find the beach and couldn’t there be a little sign saying “sea”. So I had to make a sign that said that.
This weekend challenge finally got me to take the idea out of my head and actually make it, so here it is: 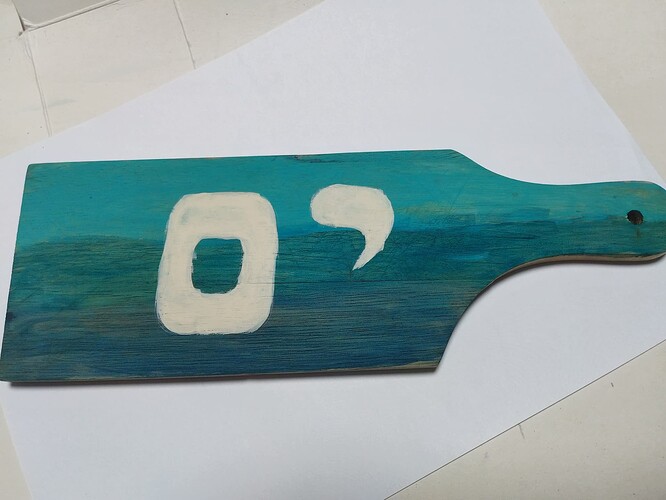 I used an old broken cutting board and acrylic paints (watered down for the background). Crafted along with my daughter, we also made a sign with her name, with a different background, I’ll add a pick of that later.
All that’s left is to hang it by the door of the balcony, so that people won’t have to wonder where the beach is.

Cool! It even kind of looks like a bouy or boat bumper.

Very nice! I love that you’ve taken an “old” idea and made it reality! Also nice that you got in some good kiddo crafty time, too.

It reminds me of my first ever international travel and seeing signs directing people to “playa y sol” in Costa Rica.

What a wonderful, happy little, personal project. I’m sure it’s going to be wonderful on your balcony.

Very cool! I love these colours and am always up for a little movie reference!

Fun! Love the effect of the watered down acrylics.

Clever and cute! Plus you made family time out of it! The perfect win-win!

Congratulations! Your awesome project is one of this week’s featured projects!

Thanks everyone! I’m very happy with the way it turned out, haven’t worked much with these paints before.
And thank you for the feature, I got all bouncy and happy when I saw that

@mellybelly81 - the quote is from a movie called “Halfon Hill Doesn’t Answer”. It’s considered a cult-classic in Israel.

I like the colors that you used and the gradient effect. Are you going to hang it horizontal like that?