Happy New Year! This is very text-heavy for just one photo, be forewarned. I finished this last night just in time to keep the 2020 date on it. Signing with the year before it’s complete was some built-in accountability to finish in a timely manner. 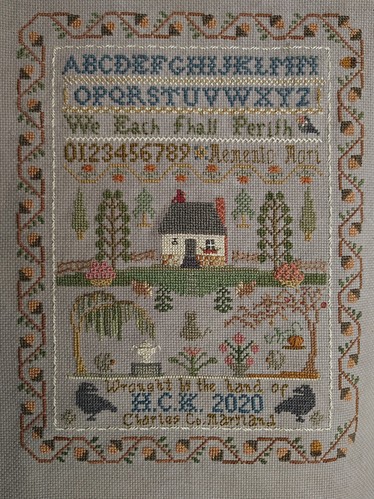 What started with the intention to do a quick stitched commentary turned into a whole research project over a couple months, and more ripped stitches than with any needlework I’ve done before.

At some point, after knowing what I wanted to say, I decided it should be a traditional sampler, with design and motifs both symbolic and specific to what was done in my region historically. For some reason I always avoided authentic traditional Euro-American aesthetics, so this was a new experience for me and I felt like there was enough creativity and intention involved behind the scenes for the “me” in it to come through. And anything with “2020” on it will carry a unique meaning.

I looked at hundreds of samplers and mourning embroideries online and read various articles to learn about the techniques and social history of samplers. Some links can be found in this post!

Librarian disclaimer: I didn’t get to read any of the evidently excellent books on the topic because library books aren’t circulating, they are too expensive to purchase for a one-time reference, and it isn’t important enough to warrant getting other people involved in connecting me with the books right now. So I’m no expert on the topic, and there are plenty of things I didn’t do completely accurately. For example, aida cloth wasn’t a thing, at least in this region. But it’s what I have and it makes things easier.

Likewise, though a surprising amount of samplers addressed death in some way, there was typically a genre distinction between samplers and memento mori or mourning needlework, and I blended the two a little more than would be normal. Mourning embroidery became fashionable in the Victorian era, but death was such a normal part of life in all eras (until our own), that symbolism, rhyming verses making mention of mortality, and references to the deceased showed up in many earlier surviving pieces.

As such, though there are many things traditionally associated with death tucked in here, there is just as much that is more about cycles and seasons, which always do include death, while fitting the unofficial “template” of Mid-Atlantic sampler layouts. That layout frequently includes stately architecture (I used my own house even though it is definitely not stately, but still from the era and more personal), a “busy yard” out front, vases and baskets of fruit or flowers, symmetry, and big, wavy borders.

Though I referred to sooooo many public-domain charts and images of historical pieces, several individual elements were my own design, since I couldn’t find what I was looking for in an adequately small design.

Also not 100% historically accurate or consistent, but I couldn’t resist using the old-school long S that looks like an “f”; I even changed my initial phrase to use words with an “s” so I would have an excuse.

From what I read, though, I think I used them in a grammatically correct manner. You can smack me with a ruler if not.

In the early days of this project my beloved foster cat died a really crappy death, so I added her likeness to the center of the yard to honor her; it certainly fits the theme. I redid it a few times because it started with accurate coloring and everything I tried looked too busy for the already busy layout, so she ended up a stylized, solid grey…but still chunky.

Since sampler-makers were using even-weave cloth, they used various embroidery stitches as their designs called for, not predominantly cross-stitch. What they did cross-stitch took a lot more attention than it does with aida cloth. I found that most of the samplers were made by girls ages 8-14, and it’s amazing how skillful they were. I can’t imagine having such a steady and meticulous hand at that age, considering how clumsy I still am!

They often stitched their age onto the piece, and so I initially stitched “in her fortieth year” at the bottom, but it felt wrong so I replaced it with the county and state (which was also included in many samplers).

I learned that after the educational and indoctrinational purposes were fulfilled, finished samplers were prominently displayed in the family home to market a skillful, obedient and well-parented future wife to their visitors (sure, they wouldn’t word it that way, but that’s what what going on). And unless you had personal servants and/or slaves to do your work for you, you only had this one chance in early adolescence to make something beautiful (and even then, it wasn’t your choice); after the sampler, your embroidery became strictly functional and you were too busy with your chores and then children for something like art.

So, this adds another personal layer of meaning for me, because I’m choosing to make a sampler, at age 40, just for my own enjoyment in my leisure time, in a world where I have the resources and rights to forge my own path, with no need to marry, have children, or fill my time with the basic work of survival. And while women’s rights and lives have improved immeasurably in many ways (and in many but not all places), those women had some invaluable wisdom that we have lost along the way.

I tea-dyed the fabric, but because of the mineral content in my tap water, the fabric turned this purply-grey color instead of brown. It is totally not a fabric color that you see with the old samplers, but since it’s still natural dye and part of the fun of natural dyeing is the unpredictability, I kept it as-is. I experimented with some scraps for dye-overs and bleaching, but I wanted to get it finished more than I wanted a brown background. I may yet try it, but l will have to weigh the risk.

Getting the thread colors right (entirely from stash) was a big challenge, both because of the shortened daylight hours and the toned background. Colors that look simply grey or brown to my eye took on various hues when paired with this fabric. Most of the dullest shades colors I have looked almost garish when I tried them out. The reproduction samplers I saw online, though beautiful, look very new because the colors pop. I was aiming for something that looked old and faded with my thread choices, but even so it’s more vivid than I would have liked. Nevertheless, it was a wonderfully meditative project for completing 2020 and the shortening days of the year.

This is simply breathtaking. I read every word of your explanation too. Wow.

I love the colour choices and the first thing I noticed was the unusual background shade which is quite striking. I would not change a thing.

Thanks, hon. I haven’t said much these past months, so it all spills out into one post.

I also read every word, because I am a lover of processes and the ideas behind the projects we make.

Loved the decisions you made along the way, the changes you made to use what you had, etc.

It is a lovely and interesting piece and a nice way to memorialize your foster cat and that time period in your life!

Beautifully done as well…modernized is not a bad thing either…and you got it done in 2020!

Whoa! This is an amazing project. I love how much research you put into just making choices. I think the colors are perfect!

I have a deep love for momento mori art and am always excited to see it revitalized. I’m so sorry for the lost of your foster kitty but what a wonderful and subtle way to acknowledge him by being able to incorporate him in your project.

I love it and I loved reading your process and thoughts. I especially love the reminder of how lucky we are, with leisure and resources to make something this intricate and time consuming-just because.

This is utterly amazing, and the backstory is fascinating. Love how it turned out! Can’t imagine how many hours you must have poured into it, especially considering that you re-did parts of it.

My sister did a sampler one summer when she was about 10 or 12. At that point in life, I did not have even half enough patience for it.

Kudos to you! Quite an accomplishment!

Thanks, all. It still kind of blows my mind that this was a children’s activity! Since where I grew up there wasn’t ever much of the European and Euro-American traditions like samplers, I knew very little about who did them or why.

I found some fantastic sources to browse of and about historic samplers, if you’re interested:

When I was 8-12, we lived in Turkey and had no TV. I say it was a great time for us because my parents used it as a chance for all of us kids to learn a whole lot of things. I learned to crochet, knit, play piano and ukulele, bowl, ride a horse, etc. I sometimes look at the knitted items I made at that young age and can’t believe how skilled I was…better than I am now! ha ha …I think learning skills at such a young age was popular because there was not tv or passive type of activities…and many were functional as well…thanks for the links…a rabbit hole for sure! lol

I loved reading your process and also just loved the project before knowing all about it. I feel like the fact that your water minerals giving an unexpected color makes it all the more “authentic” because it is that color based on where and when you live which is about as authentic as it gets!

This project has such depth and meaning- and is beautiful. I also like the idea that the color you got from your water is what was supposed to be because even though it isn’t authentic to the original period you are exploring it is definitely authentic to the place and time it was crafted. And I love, love, love your self trickery of predating the piece! I should have done that with the second sock for my poor cousin’s birthday pair! (Maybe it will be ready by NEXT September! Haha)

Truly a work of art, and a very interesting post detailing the how and why. Thanks for sharing it all!

What a beautiful piece! I love that your cat is in the center, and the trees in the lower corners are fantastic, too. Thank you so much for sharing the history of the piece, which includes your personal history, too. I think the color of the fabric is a happy accident and reflects the place where it was made.

Lovely! Woodlawn plantation used to do a week-long summer camp teaching kids hand embroidery things; I went for 3 or 4 summers in elementary school and thoroughly enjoyed it; a group of 8 year olds sitting together working on the same project can do quite good work.

This is wonderful. I love reading the process, history and emotions behind it.

I like the color of the background. It’s a very special piece, and I really liked reading the story that goes with it too.

I absolutely loved be this. I read this post days ago and was so overwhelmed with ideas and thoughts I just had to let them ruminate. I absolutely loved reading your history and the ins and outs of your sampler (and samplers in general). It’s something I may want to go on a deep dive of myself! Fascinating. Youve done a wonderful job! Thank you so much for sharing with us!