The major project I’ve been working on this week is this new teardrop fascinator that features a tsumami craft ho-ou, or many tailed phoenix. I actually finished the base hat a few weeks ago, but was doing some smaller projects and commissions before coming back around to this piece and finishing the ho-ou. 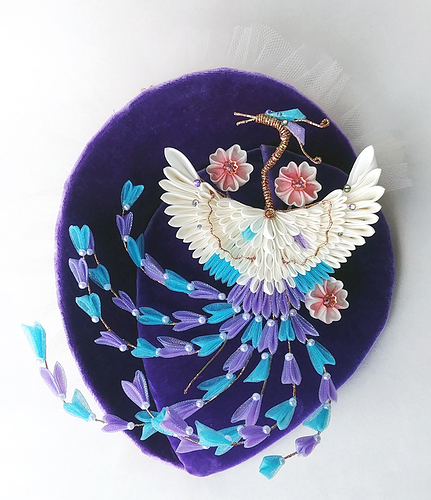 The base of the hat is made from bristol board that I patterned and taped together with standard scotch tape. I covered the bristol board base with on the bottom with pink lining fabric that I salvaged from an old dress, before covering the top with vintage French silk velvet. 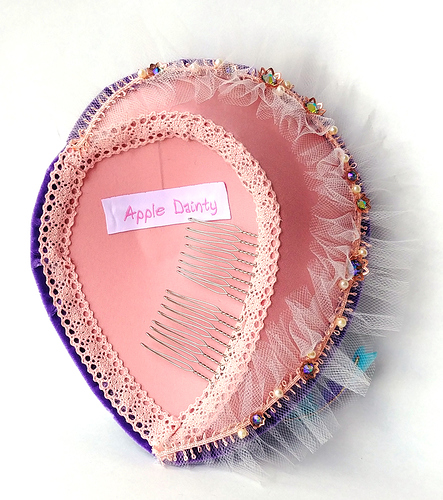 I ruffled some pale pink tulle by hand and added some of the same peachy pink trim that I used for the butterfly clutch purse, then glued on some bead caps with rhinestones. Once the beadcaps were on, I sewed on some pearls that I inherited from my grandfather, who was a jeweller and watchmaker. 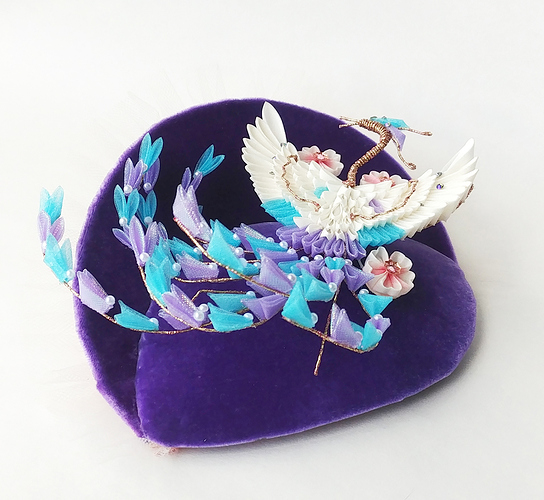 The ho-ou is on a wire and chipboard base that was coated with pink and rose gold crane patterned chiyogami paper. The feathers are made from a combination of silk and organza, and the feet, body, base of each long tail, and the detail wire on the body is copper (rose gold?) glitter wire. The ho-ou also has rhinestone detailing.

I already have another crazy fascinator hat planned, but I’ll probably cool down with some smaller projects before I start on it.

Wow, I am just amazed by the tiny details. What extraordinary workmanship!

Beautiful work. I’m always impressed by how you finish the detail work too. The lining is so pretty.

Wow, this is spectacular! I love your work; it is so precise and beautiful.

What a beauty! And eye catcher for sure!

Such delicate work and ornate work…all of your materials are so lush and rich…that silk velvet is just gorgeous.

Wow this is stunning! It’s plain to see this is a labor of love. Great job!

I loved watching you make this and knew the final product would be stunning!

That crane is gorgeous!

Wow! That is absolutely stunning!

Your work is always lovely, but this is just over the top! So beautifully created, and I love how many vintage details are in it.

What a spectacular fascinator!