If your house is anything like mine, we are SO sick of cooking the same things week after week. We are also missing some of our more adventurous food destinations that are further than a down-the-road pick up. So, I attempted to bring some adventure into the kitchen instead!

I saw this recipe on Pinterest and knew I had to give it a try. It came out sooo good! 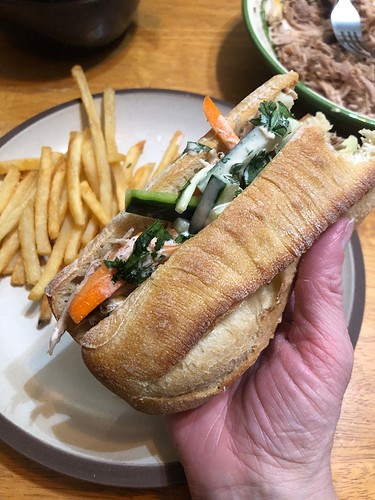 I did not have 5 spice powder so used equal parts cayenne, cinnamon, and ginger (about a 1/2 tsp each). Everything else is exactly by the recipe. I did add a little more water to my crock pot about 3/4 into cooking time as it was looking a little sparse.

I also toasted the baguette with a little bit of butter - mmmm.

Not quite Brooklyn, but it scratched the itch.

The bread toasted makes all the difference…I am going to try this one for sure…I miss our old restaurant…the one down here is like a fast food version of it and it is just not that good!

We’re tired of the same-old-same-old too, and have been experimenting with different breads and ethnic cuisines.

Thanks so much for sharing! Definitely want to try it

ooo…this would be great with home-made bread!

Oooh… my hubby loves bhan mi! This looks delicious! And pho is on our to-try list, too. My honey is a pretty adventurous chef: Korean BBQ is on the menu for tonight!

I seriously want this!

Banh mi is one of my faves! YUMMY! Yours looks delish!

That looks so good!

Yum with a side of yum!