My son turned eight today and had a very specific request for his cake. It started out as a skeleton/fire/rock theme and evolved into this. 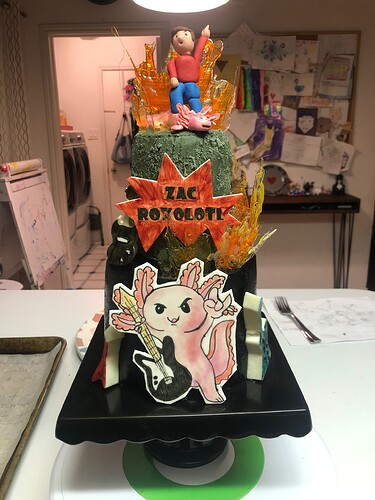 It changed as my kiddo decided he wanted to incorporate axolotls into the design. This is his precious drawing he made for me that showed what he wanted. 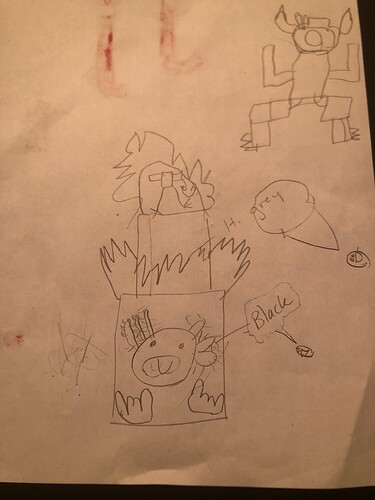 I made a few aesthetic decisions, but everything is pretty close! It’s vanilla cake and strawberry cake with basic American buttercream. The top layer is iced with grey, but the bottom layer is iced white and painted with black edible paint to limit how much food dye it would take to make that much black vanilla icing.

Everything is edible, save a handful of toothpicks. The decorations are either fondant with edible pen and powdered food coloring, white chocolate, or isomalt sugar fire.

here are some progress pics. 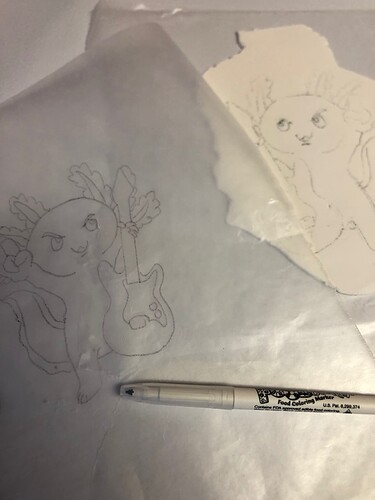 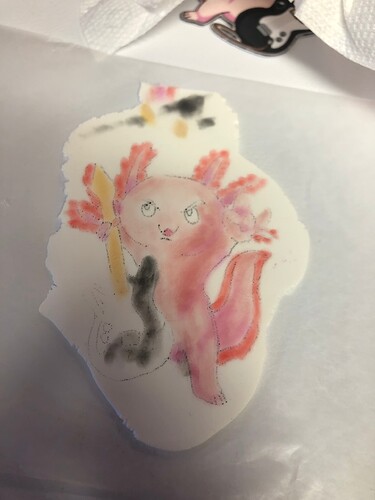 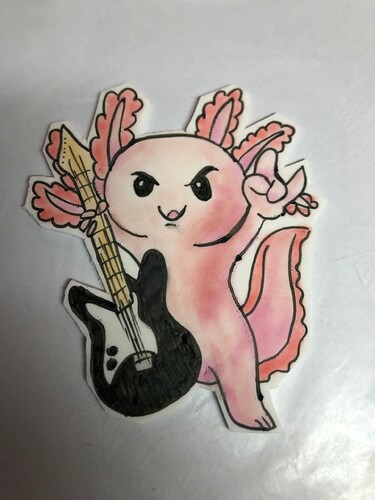 My kiddo originally requested an axolotl as a robot made out of fondant for the topper, but after I made this axolotl, his little brother suggested I make a figurine of the birthday boy making a sort of Freddie mercury pose on the axolotl. It was so silly (as everything my six year old does), that we went with it. It’s so ridiculous. I love it. 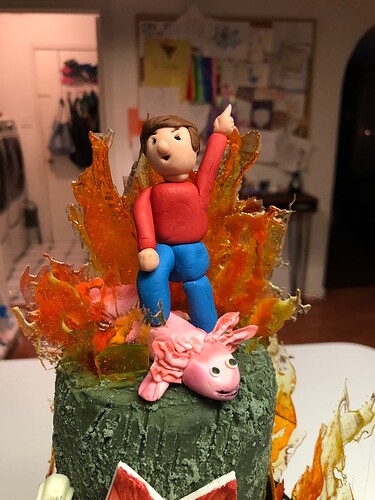 My eight year old birthday boy is the king of dad jokes, so the Zac Roxolotl (rocks a lot “l”) was a big hit.

Fingers crossed it does ok on the counter tonight.

we are celebrating tomorrow with cousins and it’s too tall to fit in the fridge.

Super cool! I love seeing his picture and the progress shots, as well as the finished cake. Any 8-year-old’s dream! He and the partygoers will love it!

You are the best! You should frame his drawing and a photo of the cake side by side.

This is really cool! A cake, story, and birthday to remember!

Oh yeah! This is just so ridiculous is all the best kiddo ways! And so well executed! Redheadedblonde also ROXOLOTL!

Oddly, just this week I also came up with a dad joke/portmanteau with axolotl as part of it.

This is so cool cool! Amazing job making the specs come to life.

A-MAY-ZING! You are the birthday cake goddess!

I think we need to hear this joke. You can’t just leave us all hanging!

HAHA! Well, Delia does this thing where she rolls around on her back - that fish-floppy thing dogs do - and she makes these huffing-snorts while she does it. We call it “schmazling.” They other morning she was really going for it and I just called her “Schmazalotl”!

Oh, I have definitely been low-key plotting how to do that in a way that I would get the result I wanted and that she would not hate wearing, at least for a little bit.

Your fantastic craft is one of this week’s Featured Projects! Congratulations!

This cake is so fun!! You did an amazing job making his vision cone to life!

This cake is absolutely fantastic!! Such creative ideas and brilliantly put together!

Could this BE any cuter?!? No, the answer is no. This rocks!