Continuing our new tradition of commemorative ATCs for my family!

These are for my son and his wife. She’s @Chr1stchan here on LC, and we’ll see them very soon as they pass through here on their way to Florida, where they will be making their new home.

When my son was a little guy, I want to say age 6 or so, the Dinosaur World Tour stopped in Edmonton Alberta Canada, where we lived at the time. They had great exhibits and educational discussions. My son was called up on stage to show off a model of what they believed a T-Rex heart would look like and it dwarfed him.

When my son and his wife were dating, she joined us on a trip to attend our niece’s wedding. Naturally, the subject of weddings came up and she, being the sweetest, most feminine metal head in the history of ever, suggested carrying a battle axe down the aisle in lieu of a bouquet.

Ah, we adore this girl! Which is why we gave her thIs battle axe for her birthday about a week later! She loved it, and named it Baldur. 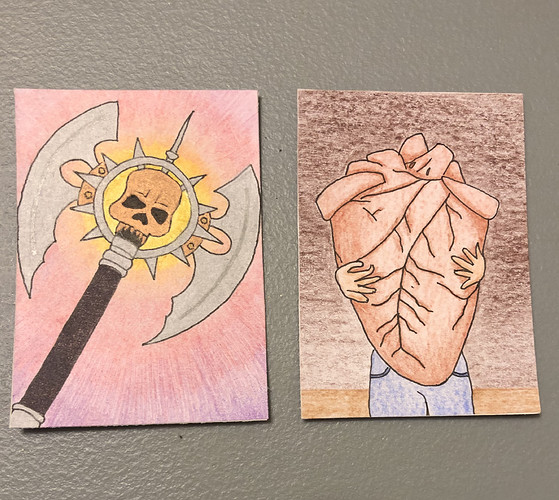 On the day of their wedding, she opted for a more traditional bouquet, though. I think we all had mixed feelings about that.

I like the ATCs, but I LOVE the stories!

I love this tradition and seeing the atcs, but you are so right! These stories are so great!

What great memories! And these ATCs are a wonderful way to commemorate them!

On the day of their wedding, she opted for a more traditional bouquet, though. I think we all had mixed feelings about that.

Aw… I hope there was at least a small dagger buried in it!

Nope, but some of their wedding photos featured karate moves!