So, photo heavy post ahead, but I am so insanely proud of how this came out, so I have absolutely no apologies

I have had to wait what feels like forever to post this! It was made for @Edel in the 12 days of Christmas swap, originally posted to her on 30th November. Due to the postal service, the parcel then sat somewhere for about a month, before being returned to me in early January. And I had labelled this as Day 12, so was the very last present to unwrap.

First up, the whole thing, and actually the only photo I took of the mini ivy plant apparently. 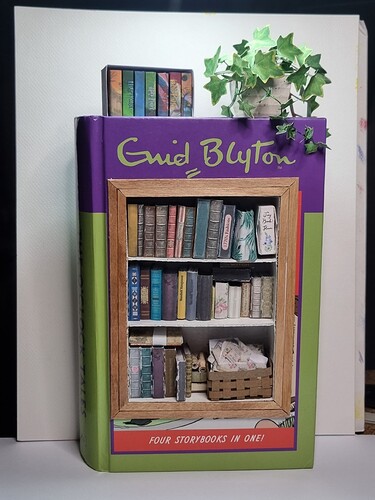 The book was a charity shop find. I specifically looked for a mass produced version of a book, so I didn’t feel too guilty cutting into it. 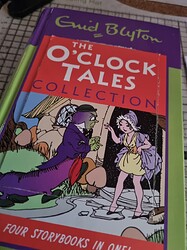 Cutting into it, and gluing the pages, took so much longer than I had anticipated! Luckily I could take regular breaks to make the contents of the shelves

The shelves themselves were created from a thick cardboard and the “photo frame” surround was made from coffee stirrers, stained to a give a darker colour. 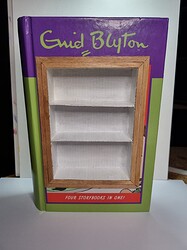 Mini books - I absolutely loved making these and had to actually make myself stop - I could have added so many more! All of the books open and have content, although some only contain images, and where there is writing, it is not readable. A number of the books are just random finds from Pinterest, so I am not able to credit all the creators sadly. Some of them were printable downloads purchased on Etsy and some I did create myself in photoshop.

All of these are from My Porch Prints 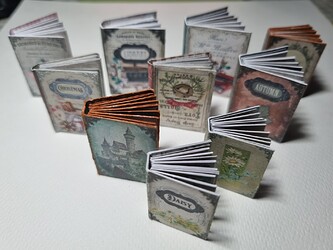 These I created in photoshop 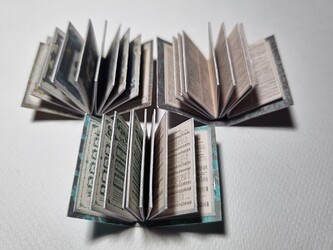 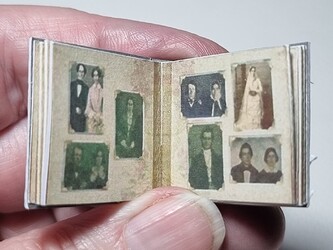 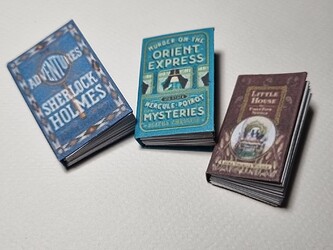 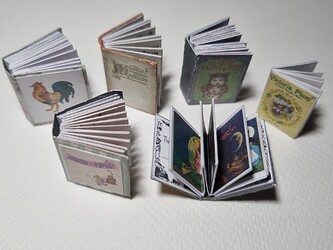 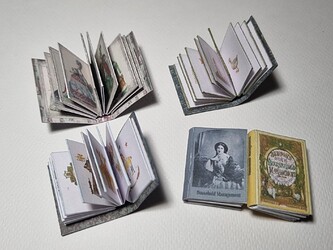 The Tiny Book of Flowers is a book in a box, with 12 pop up pages, one flower for each month of the year. I have just added a couple of my favourite months. 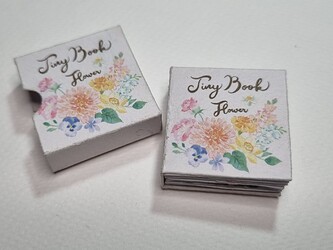 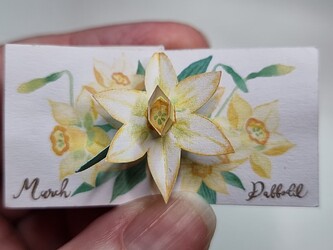 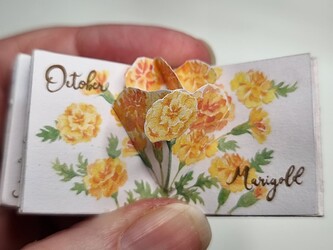 This little book almost ended up in the bin a few times - printed in paper, it was impossible to cut and fold, printed in card, you couldn’t close the book! Even the final version (printed in a combination of both) ended up in time out more than once 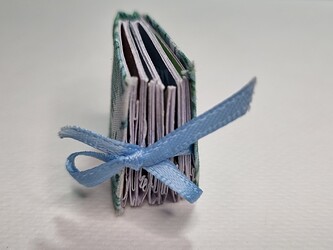 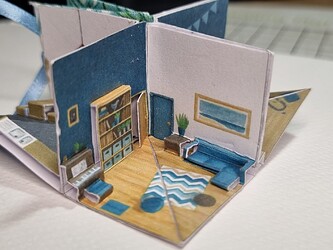 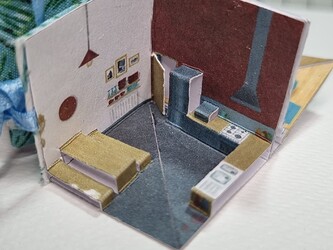 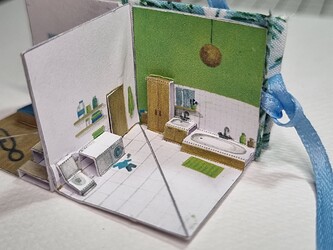 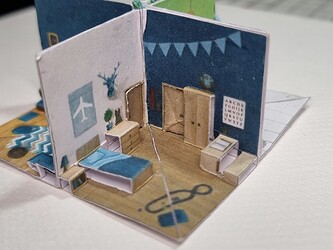 The full set of Harry Potter books - the covers I found as a printable on Pinterest years ago and the insides were created in Photoshop. The box was created in photoshop using an image of the castle found online. 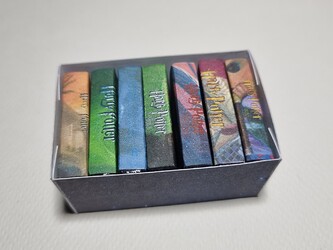 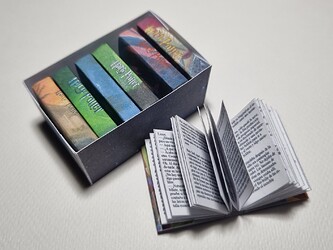 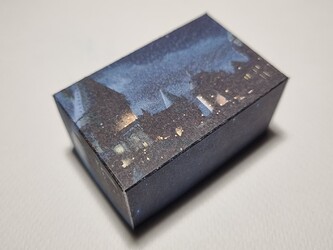 Moving on from the books, I decided that any good bookshelf needed some other bits and pieces to accompany the books…

There is a little basket, into which I added the journaling bits and pieces (although what I love is that there is no right or wrong way to fill the shelves).

The journal was a printable from My Porch Prints and printed full size would be just under A5 size - I actually don’t remember what size I printed this out though, maybe 1/8th.The little basket was a cardboard basket tutorial for a dolls house, which I found on Pinterest. I had to add the rest of the journaling elements separately, as they wouldn’t fit inside the journal 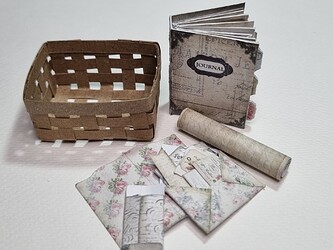 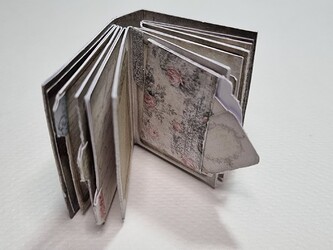 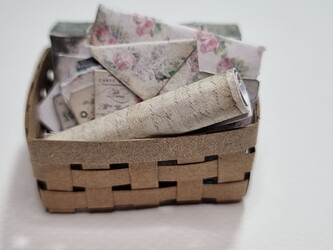 A pack of cards - a printable image found online and printed out oh so very tiny. 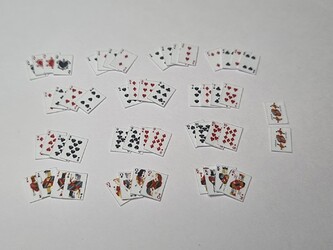 An astrology set, including book, scrolls and cards (in their own box). 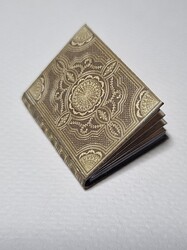 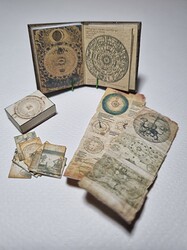 And last, but by no means least, a Harry Potter Monopoly set. This is available as a printable set, sized to adapt a normal monopoly set, but I resized everything in photoshop to a 1/12th scale. Cutting this out was somewhat fun! 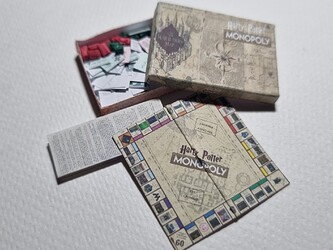 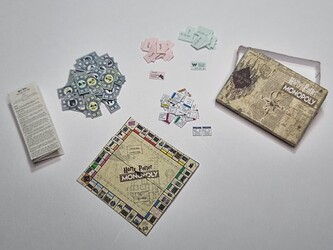 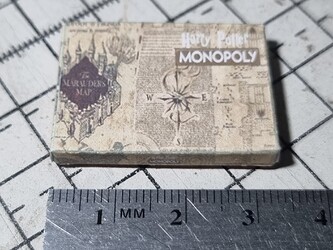 (For those monopoly lovers amongst us, you may notice this set is sadly missing the silver playing pieces and the dice. I tried so hard, but in the end I had to give up after attempt number four went in the bin. I just could not get them small enough to fit in the box!

Notes -
The mini ivy and tiny book of flowers are printables from the Canon Creative Park, printed out at a reduced size
Many of the mini books are from My Porch Prints on Etsy
Pop up house is a freebie, originally found on Pinterest
Astrology set from Ever After Miniatures on Etsy
Harry Potter Monopoly printable set is a freebie I found via Pinterest, but there are loads of versions out there

Whooaahahawow! I am so impressed with all of this but not surprised at all that it’s made by you. Amazing! & could not have gone to a better recipient, she will love every bit of your careful & considerate work. What absolute treasures.

While I will never be able to make such tiny items like you did, I appreciate the link to the flower pop up book very much!

You did such a nice job filling that bookcase…which in itself, is amazing! Love the whole look of the ivy, the basket, and the books…

The tiny deck of cards…how did you even see to cut them out? lol…

This is absolutely incredible!! I’m blown away by the level of detail in each piece. Everything has treasures inside of treasures. An amazing labor of love!!

Wowwww. I can’t imagine doing one of those things in miniature without going around the bend, let alone that many.

I had to add the rest of the journaling elements separately, as they wouldn’t fit inside the journal

HOLY SMOKES! THIS IS AMAZING!! Insanely good on all the tiny things!

Out of this world fantastic and amazing.

Wow! I can’t get over the teeny tiny adorable-ness of every single element. This is truly a labour of love, and you nailed it!

wow, truly spectacular! I can see how much care, thought, and patience you put into this. Absolutely lovely job.

Thank you all for the love for this project

how did you even see to cut them out?

My magnifying ring light got used A LOT in this project

my first stop for printies…

This is intense! (I’ve been drooling over the my porch prints shop recently too, possibly from an earlier link you posted?)

They are strangely addictive

You guys need to do a pilgrimage to my house to see this in person, it’s mind-blowing. So tiny and so perfect. I can’t tell you how much I love it. Amazing amazing work xx thank you xx

I cannot believe my eyes! Amazing! Can’t wrap my head around how you made such a tiny pop-up book and a doll’s-house book on that scale.

I’m blown away. Oh my goodness, this is so incredible. The fact that you made a pop-up book is mind boggling. Everything is so amaxing and so cool looking! I absolutely adore this!!!

All of the details are amazing! I’m in awe of the plethora of tiny, perfect books.

This is ah-mazing! Fantastic job!

Absolutely extraordinary work!
This is so beautiful, so delicate, so thoughtful, creative in so many ways and on so many levels.
Just brilliant.

This is super amazing! It looks great on first look and as you look closer and closer. So much amazing detail! And still curiosity inducing from several feet away.