I had made this campfire block a couple weeks ago. Truth be told it was for @marionberries for a swap project but I decided to go in a different direction. So now the quilt block is all mine.

The block has been floating around my craft area and this morning I needed a little project to do while my son played at 6am. (Making a playroom in the basement right next to my craft room was the best idea ever.)

I added some white fabric around the border, top stitched right next to the block itself. Since I’m pretty sure the white fabric is cheap muslin I decided to thicken up the front a bit and double layered it using some HeatNBond. I forgot that HeatNBond is kinda stuff but hopefully with use and washing it’ll soften up a bit.

For the back I did an envelope style closure. I’ve never actually done that before so I feel like I did pretty good for winging it. (I know most seasoned sewists are like “That’s the easiest thing ever.” But hey…I’m all about celebrating every win! 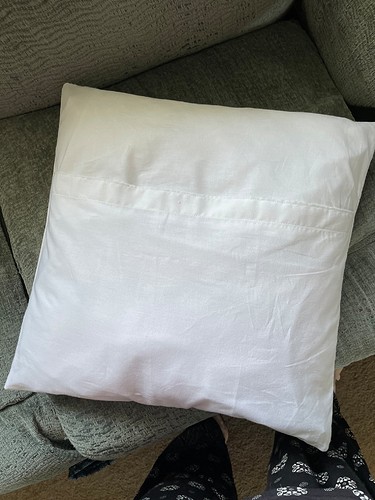 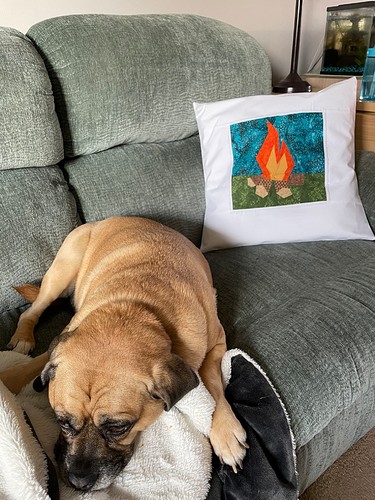 As soon as I showed my three year old he tried to claim it as his own which is always cute. This pillow, however, is destined to go to our camper which we’ll hopefully be visiting this weekend.

I love it! It’s perfect for a camper or cabin, but would look adorable anywhere. Great job! I love your craft area!

It’s SOOOO CUTE! ACK! All the fabrics for the quilt block are just right for it and it really pops against the white, giving it a really fresh, up-to-date style.

Aww, that came out so cute, but I wish it was mine, lucky kids and dog. It looks amazing with the white. Where did you get the pattern? I may just have to make my own!

That is a fantastic block! I love the starry background fabric, and the wood came out very nicely as well.

Loved the block! I love the fresh look with the white as well…such a fun thing to have decorate our camper!

The fabrics you picked are amazing! This is gorgeous and bright and will be the perfect touch for the camper!

Awesome piecing! This will be perfect in your camper.

I was super proud of my first (and only, lol) envelope-style pillow cover, too. Take what you can get!

When I saw the thread title, I got a mental whiff of campfire smoke. The pillow is perfect!

I love it! Can practically smell the campfire smell.

Perfect. I love the fabrics!

So cute! It’ll be adorable in your camper.

I have to join the chorus of admirers of the fabric choices in this fabulous pillow. They really are perfect and the white looks so clean and fresh. It also makes me think of looking out the window of a white-walled camper at the fire pit outside. I won’t lie: I covet this.

Whheeee, it looks GREAT! The fabrics are so wonderful, especially that night sky, wow.
I totally looked that block up as soon as you posted it. There are some really cute camping blocks out there, I feel a project coming on for our new camper too!

Wow! Y’all are so supportive! Way to make a girl feel good. Thank you for all the kind words.

@marionberries I got the pattern here:
http://etsy.me/10ikGRT I went down a rabbit hole of paper piecing patterns. I made you something else though!! I hope you like it as much as this but honestly…I think you’ll like it more. At least I’m crossing my fingers you will.

@magpie So many!! I found this quilt pattern I think I’m going to attempt for my first actual non-baby quilt. Then I’ll have quite the blanket for the big bed at the camper. Here’s the pattern: 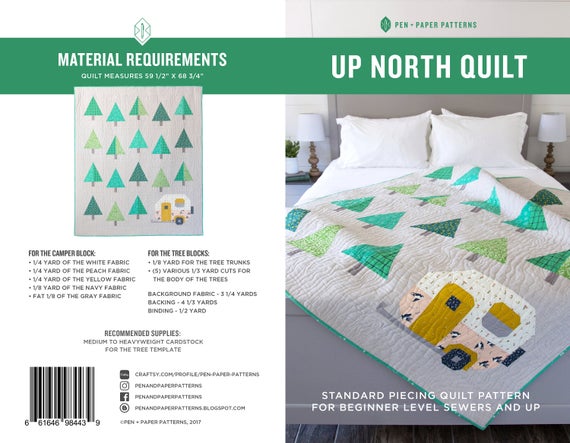 A throw size quilt pattern perfect for the outdoor enthusiast OR for people, like me, who just think campers and trees are the cutest :) This entire pattern uses standard piecing and features detailed instructions, diagrams and tags to label your...

Everything about this is perfect! Thanks for sharing the pattern too, I might need to make one from outdoor fabric for our fire pit

That would be so cute!! You have my crafty thinking wheels turning…a whole set of outdoorsy camping themed pillows…

I’ve pieced with nylon before but it was so slippery…thank goodness the pieces were larger and the pattern was simple…I have also used outdoor duck fabric…a bit thick but it is pliable…again, simpler patterns or larger pieces…

That is so great! I love the bright colors.

That is really great, I hope you end up making it. I found so many camping themed blocks! I think I could make a large quilt with no repeats, there were SO many campers and tents and animals, lol. Popular pastime, camping.

I came across this slightly simpler version if somebody is really thinking of trying it in outdoor fabric.