This link is a document I switched to. Let me know if there are any problems with viewing it. Also, if you’ve written any patterns and would like to contribute to it, let me know and I’ll add them. (If you’d like to help editing it, message me, and I’ll give you permission to edit it).

Ok, since my trigger finger is making it such a pain to knit (Along with other pains), I guess my knitting days are behind me…Or are they? I think I can still write them, heh, so if anyone would like to have a go…Well, I’ll post them here.

This first one is an idea I had about knitting a little bag for holding a phone (or in my case a finger splint, as well, O_o) which can be safety pinned to the side of a bed. I think it’d be even handy to have in a hotel room, especially for people who use their phones for alarms.

Using another needle, bind off 34 stitches (Sliding the first stitch off the left needle onto the right unused needle. This one will be bound to the last stitch of the piece).

Remember you don’t have to do the basket cast on as I do, but you can start with 64 stitches and sew it together at the end.

yo K2 pyo : Yarn over knit two pass the yarn over the last two stitches knitted.
K-2 : Knit along til two stitches remain on the left needle. (Basically knit across minus 2)

A video I made about the basket cast on. Knitting - Double Cast On [ Basket Cast On ] 3 - YouTube

Thanks for letting us know about this!

Great idea! Thanks for sharing your pattern. I hope to see you knit again…

I’m thinking the first and second rows should actually be the same type of stitching, as this is supposed to be all a garter stitch, O_o: (I’ll have to think on this)

I love that you are doing mental knitting and patterning. Very cool! Wish I could knit…The lettuce wash rag sounds fun.

(I may have to make a video for this…It’s quite…something,

Increase: (This depends on how one starts. For this example, I’m going with the right side starts with a knit. Also, I’m only writing the two stitches that are being increased. No other stitches).

RS: kfb S1 wyif
WS: Knit front without removing stitch from left needle, move the left needle stitch to another needle and bring to the front, S1 wyif, Knit through the back the stitch on the spare needle. S1 wyif.

Decrease: (Once I feel up to it, I’ll attempt this in the middle. As this one is only decreased on the sides). 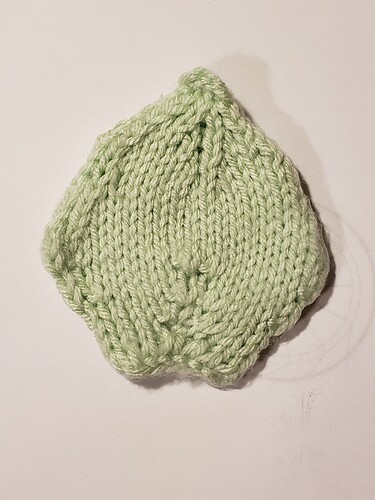 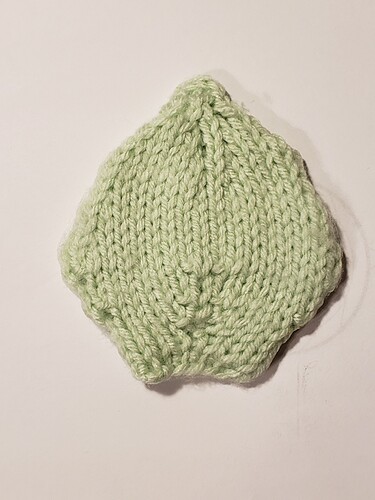 See the document Lettuce Knit in the link of the first post for the pattern. Charles' Knits 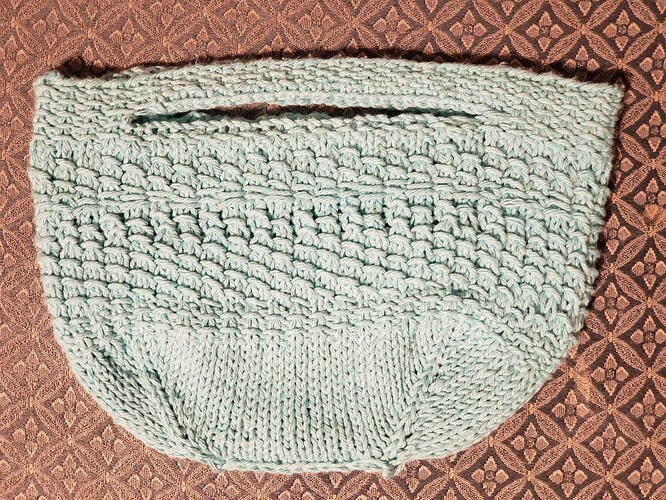 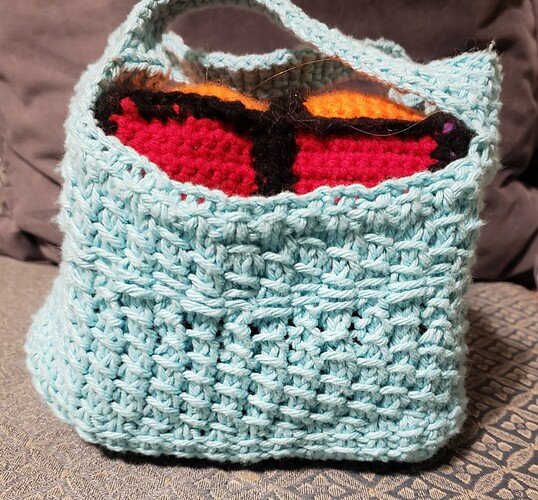 The bottom, which is bound off by a method I call basket bind off. 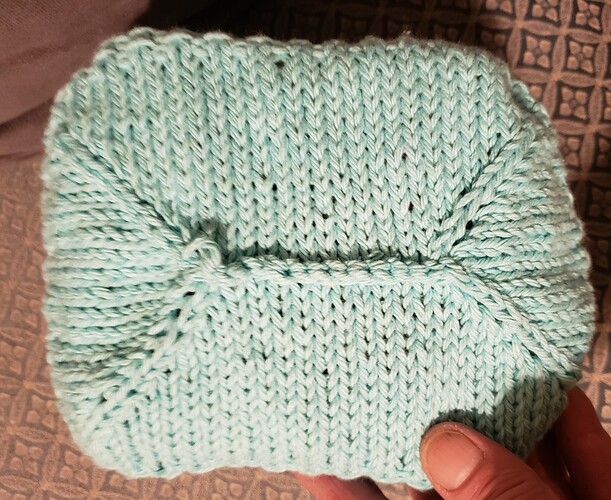 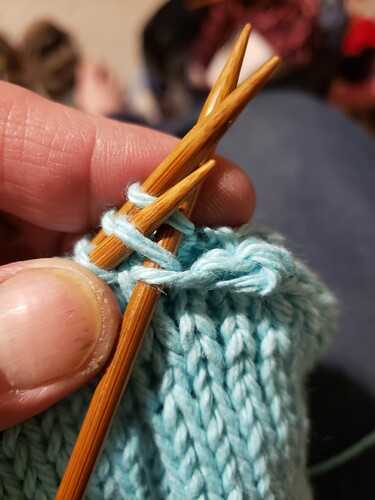 The next image shows all three needles. The bottom one is the right needle with the stitch being bound off, and the top two needles are the stitches on the bottom of the bag. 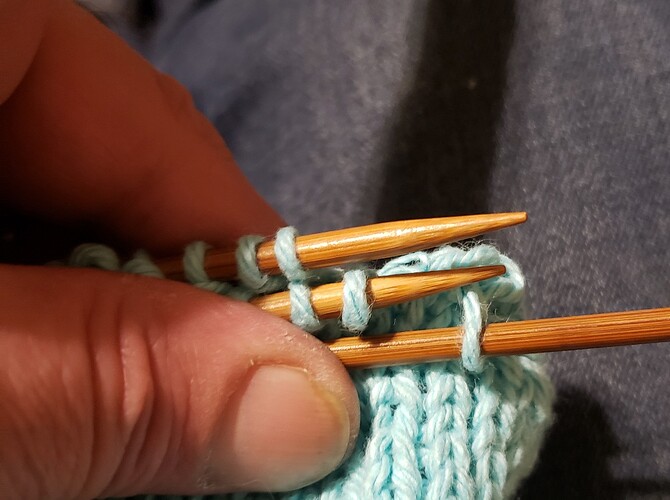 (it’ll take me a while to get the other bind offs figured out, but for now, it works, heh). 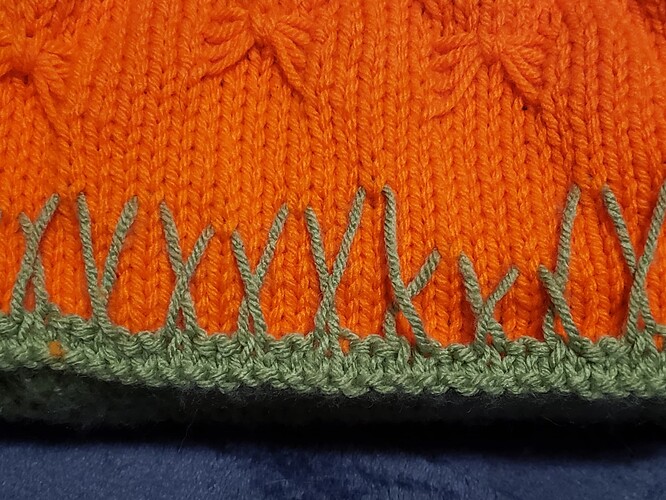 This stitch is worked on three stitches by two rows (the extended piece that rises above is based on how many wraps.

yo0-2 : wrap yarn around needle zero or 1 or 2 times. How many wraps determines how many rows it will stretch.

Continue knitting whatever pattern you’re working on stretching the wrap every row until it is fairly taut. Then follow whatever pattern your knitting, and whatever stitch is above the second stitch of the grass stitch, knit or purl it under the loose strand. P1 uls or K1 uls.

Ok! The third bag is done…ish. I found an issue in the pattern (at row 40) so I have to make another one, but I went ahead to finish this one to at least write the decrease and bind off part of the pattern. That, and I really didn’t want to frog it. (turns out the whole pattern needed to be rewrit to fix it).

Also, I figured out how to get the seam on the inside of the bag, so it looks so much cleaner.

While I’m working on the next one, I’m going to try and record a video of making the bamboo and leaves knitting. So, as soon as I feel up to it, I’ll get started on it, Heh heh heh! 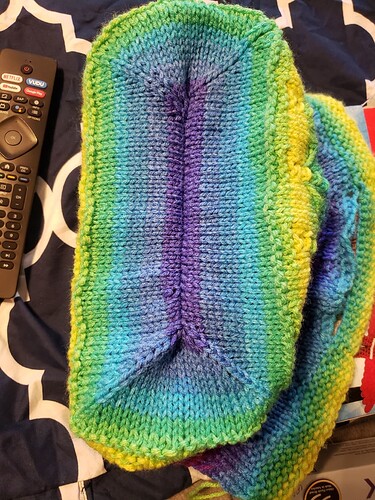 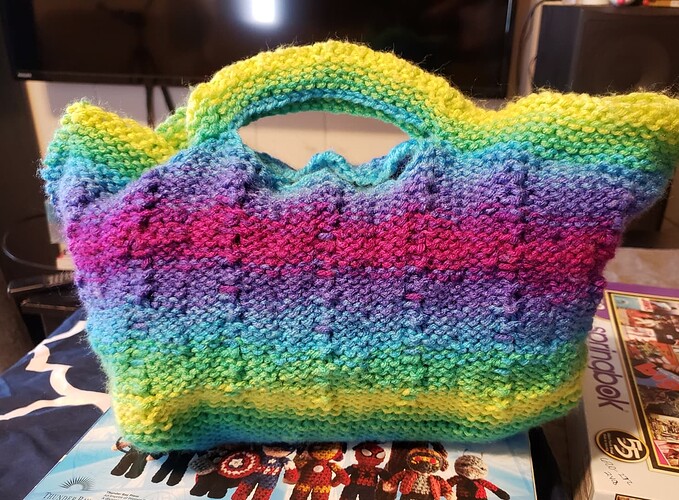 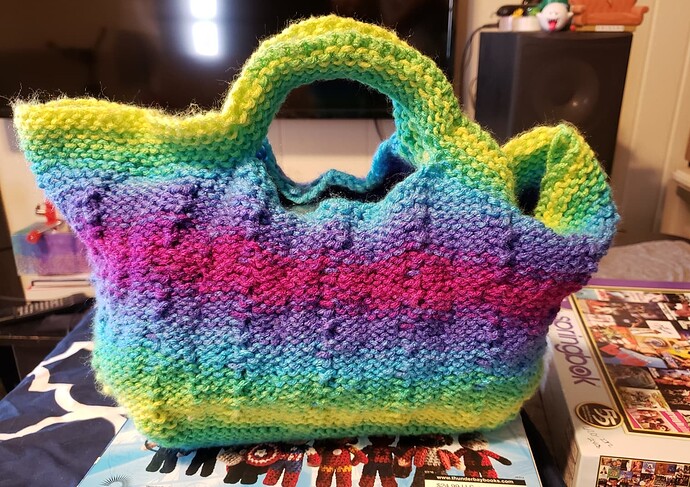 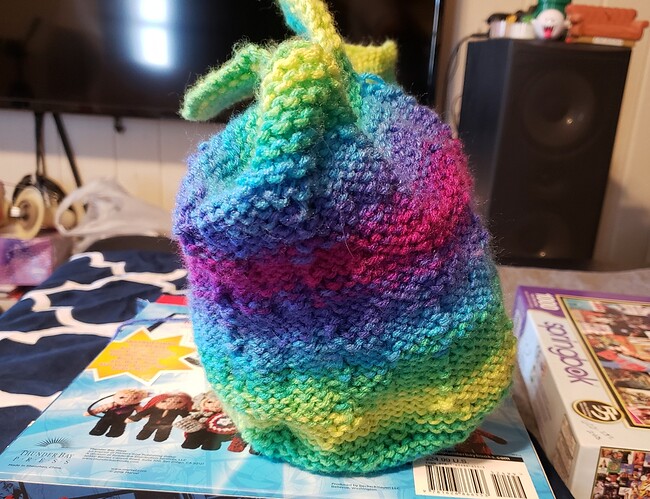 Ran some heavy tests on the bag. I need to think of something else for the handle. It pulls the yarn pretty roughly. Hmm? But what? 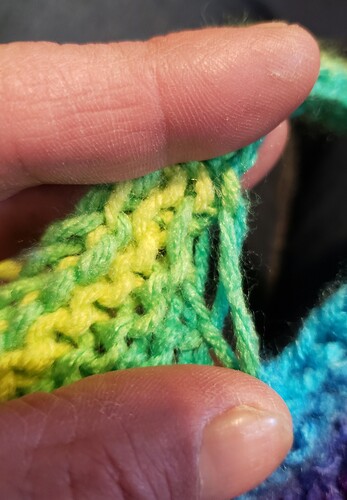 Love the colour you used

I’ve crossed stitches to reinforce on vertical holes, but I don’t know if there’s something similar to be done for this, 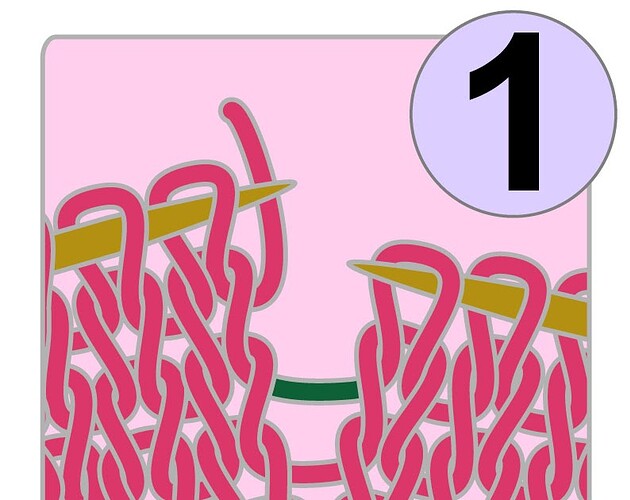 Crossing stitches: one way to avoid a hole on a vertical opening in knitwear

I was thinking actual cross stitching when I read that, heh.