I have things on my list like Egyptian mythology monsters (Ammit and the Set animal), obscure 80’s horror movie creatures (Critters 1&2), and a bunch of Japanese plants and festivals and flowers… Once I’m on my computer tomorrow, I’ll pop the whole list in.

For now, please enjoy my happy Rocket Raccoon bookmark, which I made during a library craft night, self-modifying a perfectly benign woodland creature pattern.

This is another fun thing to make with felt badges! 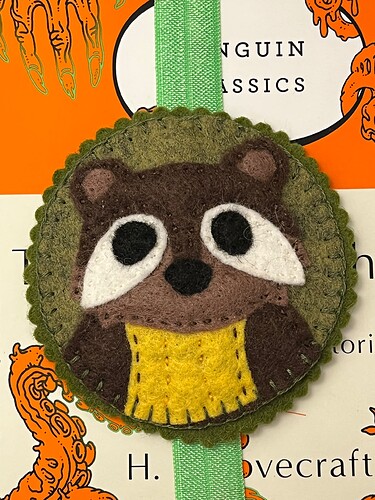 Please List at Least 5 Themes for Your Partner to Choose From:

-The Set animal (from the same book series; so hilarious, and also not my art, but here’s a cute one)

-Alligator Loki!!! So cute! I like the realistic version as well as various cartoony/cute versions

-Xenomorphs (from the Alien movies) & Predators (from the Predator franchise)

-Skeletons and skulls (either traditional or sugar skull style) – I live with a life-sized medical skeleton named Hezekiah, who dresses in fancy clothes and gets different hats for different holidays/times of the year

-Zombies (both the drippy, Night of the Living Dead kind and the cutesy, cartoony greenish kind)

-I also particularly like things where traditionally scary creatures are doing cutesy stuff, like having tea or petting fluffy animals, etc.

-Rabbits/bunnies (particularly lops; I used to have a white short-eared lop with grey ears, nose, and tail)

-Japanese things (I used to live there!):

-Torii shrine gates (the red-orange ones)

-Kodama, Soot Sprites, and Dust Bunnies from “Princess Mononoke,” “Spirited Away,” and “My Neighbor Totoro”

-Tanuki and Kitsune from Japanese mythology

-Japanese festivals/celebration icons, like the Rabbits in the Moon for Autumn festivals, and the Tanabata trees for the Star Festival

Hopefully, mine is a fairly easy list for someone to work with:

I need to remember to sit down tonight and fill out the Q officially and send it in!

I noticed there was no info about size preferences on the questionnaire blank. I figure I might add that to mine, and message partner’s for it if they sent theirs in earlier. I have seen some super cute tiny ones, but maybe people prefer a palm-sized one or something different?

Ya, I’m wondering about the size too. Some of these themes would be very challenging to get into the small space I was imagining, lol. Great lists but I better get out my magnifying glasses, lol!

I noticed there was no info about size preferences on the questionnaire blank.

Good point. I was envisioning something palm sized but yes touch base with your partners to make sure!

Also for anyone sitting on the fence - you have 2 more days to sign up!

Also for anyone sitting on the fence - you have 2 more days to sign up!

Sitting no more…my Q is in!

Felt badge I made in a swap on the old site 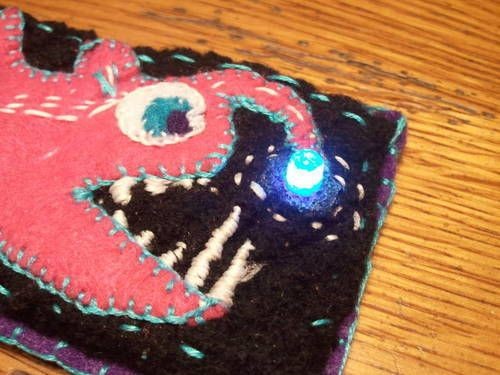 My list
Megatokyo or Fruits Basket manga
Fennec fox
Goldfish/koi in all their varieties and other pond life
Dinosaur/dragon
Pinterest inspired- Just don’t get lost, we would miss you!
Cats and their many poses
Science fiction/fantasy/pick a fandom
Artist’s choice

@EriChanHime now that I’ve gone and looked at mine I do have a couple that are maybe half palm sized? those are magnets on my fridge.

I also have small palms.

I have signups through tomorrow but I am busy Saturday morning so I will extend sign ups until noon Eastern time on Saturday May 21.

Tagging people who showed interest on the discussion thread. Join in! we already have several International participants so don’t let location stop you. This should be a fun simple swap!

I sent in my Q just now! Very excited to join you all.

Thanks! It was really loved and fun to make.

I just had a moment’s panic, as I had intended to come back and work on the questionnaire and forgot. So happy to not have missed sign ups! Off to work on it right now

So are you totally into Halloween?

OK Partners are posted at the top and here.
I added everyone to their partners questionnaire instead of sending new msgs. if you are going to converse with your partner please start a new msg so you aren’t copying me and their other partners!

Had a pretty rough week, and when I got home from work yesterday I needed to stress-craft something!

We were going to the Ice Cream Museum (more of an interactive art installation, really) to celebrate a friend’s 40th birthday that evening, and I decided I wanted a little felt ice cream cone to wear in my hair! I cut everything twice in case I mangled something, and while I was on the couch stitching, my husband leans over to look and goes “How many do you have ready to make?” I told him “Two, but I’ll only have time to maybe finish one.” He says adorably: “Oh, I was just thinking that if you were going to wear one, I should wear one with you.” 🥹 So cute. I told him if he was okay with me hot gluing his, he could have one.

I managed these two pins in an hour and a half fit of distress-fueled therapy crafting! Mine has a bobby pin sewn on and bent into a curve, and I used a straight pin to attach his like a boutonnière. We got lots of compliments, and we enjoyed being dorky and matching. 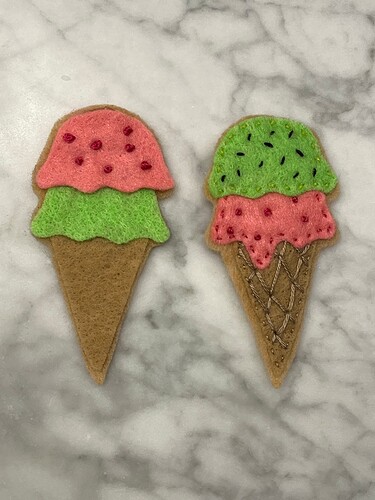 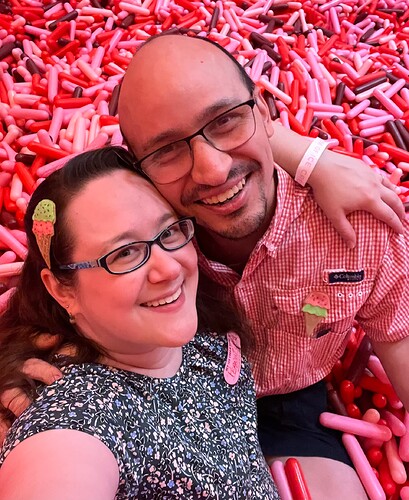 You guys are too cute!

So excited for partners!! Hi @wittychild!!