Darn it! A tutorial

Who in their right mind mends storebought socks? Ahem, that would be me… But only if I happen to like the socks. I’ve also darned annoying tiny holes in t-shirt fabric. However, this works for handknitted (or machine knitted) items too, you would just use matching yarn instead of thread. 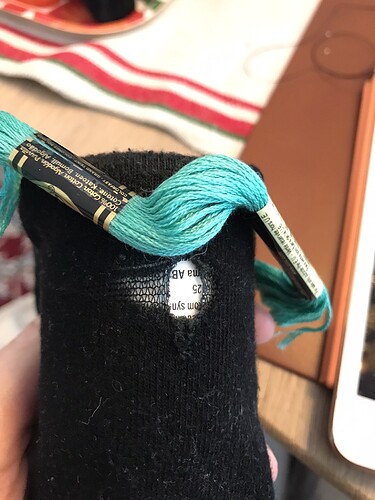 image1536×2048 609 KB
Ingredients assembled. Start by threading the needle. I like to separate the embroidery floss and use two strands. Thinner thread will make a thinner fabric while thicker will work up quicker. Two individual strands is my happy middle ground.

I’ve stretched the sock slightly over the pill bottle, trying to keep a similar degree of stretch as it will have on my foot later. The darned patch will not stretch like the rest of the fabric when it’s done so without stretching the fabric a bit, it can feel weird. 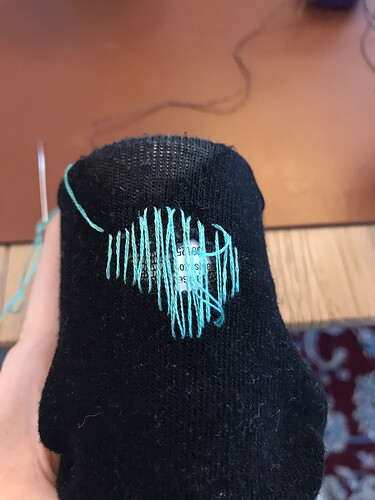 Do not knot the thread. I go down from outside the sock and push the needle to where I want the darn to start. In the picture I started in the lower right corner and just went up and down to cover the hole and the worn area. Don’t worry about getting it perfect at this stage.

There’s another worn area in the top of the picture, but I didn’t feel like doing a huge darn… I might make a second one when/if that part wears through…

I leave the tail unknotted to be able to adjust tension. Remove any slack and uneven tension by pulling a loop up, then pulling at the neighbouring loop, and so on until you can pull one of the ends. 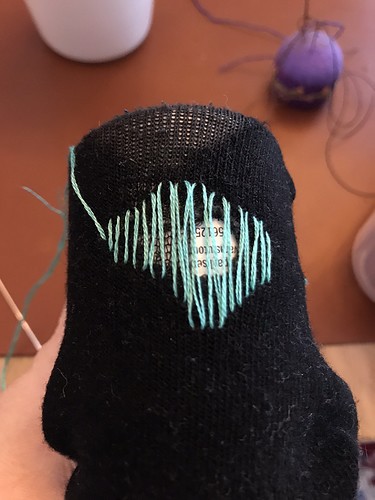 Ready to start weaving. You can see a bit of the starting tail to the far right. I’ve placed the working end of the thread close to the middle on the left side. 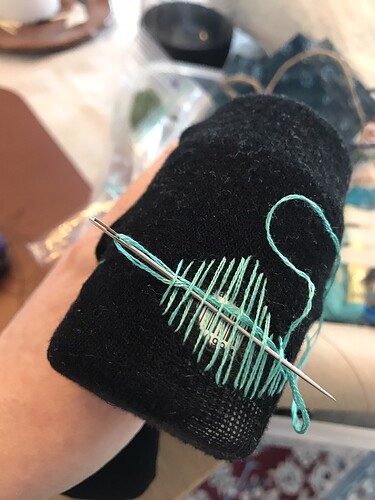 Time to start weaving. It’s easy, just go over-under-over-under across the darn. I’ve turned my needle to avoid splitting the threads with the sharp end. 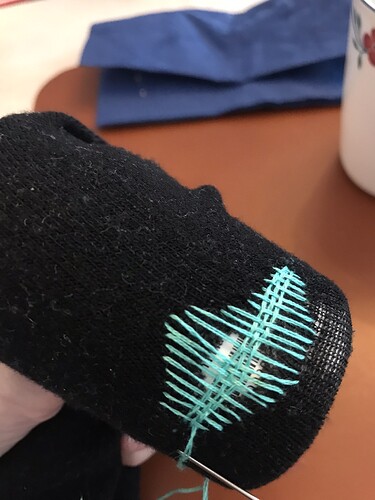 It’s easier to keep the tension when starting in the middle. I did the middle strand first, then the strands to the sides of it.

Whenever the thread starts to become too short I weave up and down in the fabric as usual and then leave the end hanging on the right side of the sock. I’ll fasten them all later.

You can use different colours for a fun effect, or for using up smaller amounts of embroidery floss. 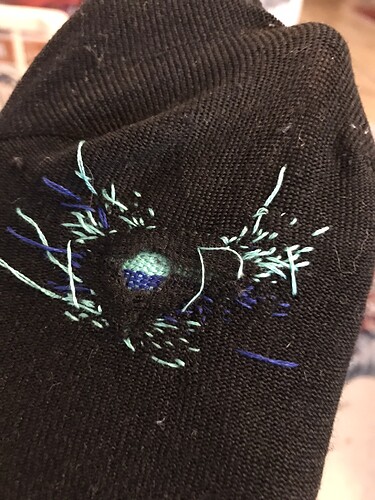 This is the back before I started fastening ends. All the ends are on the other side. 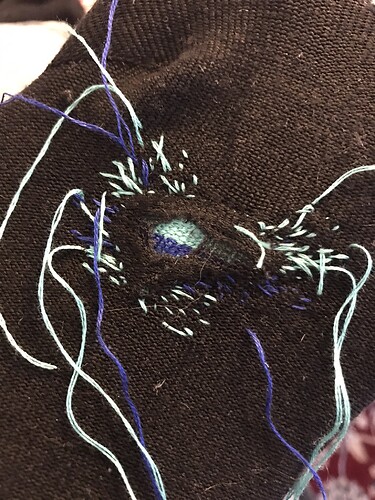 Pull the ends to the back and prepare to start fastening… 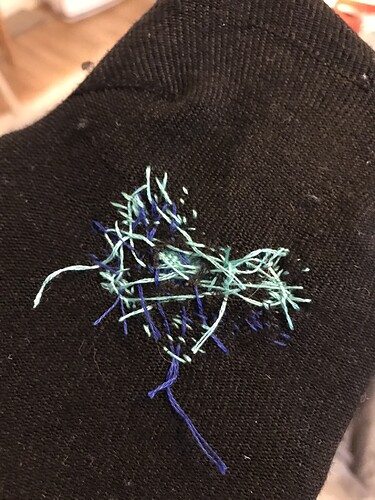 It’s not pretty, but it works! 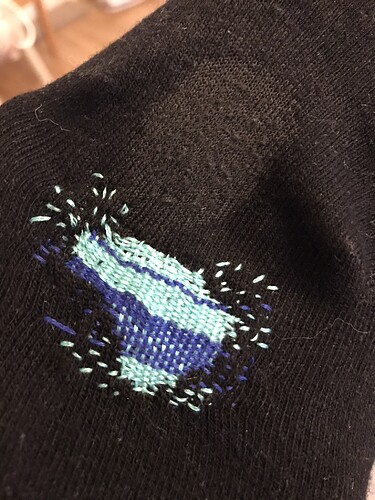 All done! You don’t have to make all these stitches around the darn, but I had fun with it and liked the look. If you don’t you can just make a tiny stitch at each turn.

The rows are a bit wavy since I’ve really crammed them in there. A tight weave will hold up better.

You can use a matching thread if you don’t want a colourful patch, but it is a bit harder on the eyes. I wouldn’t do black on black… White on white was annoying but doable, and pretty much invisible despite many mistakes when I couldn’t keep track of my threads

Don’t be afraid to try! Even if the first try is ugly you will have one less holey sock. And if it’s truly awful all you’ve lost is a bit of time and embroidery floss if you were going to toss the sock anyway.

OH! This is SOOO awesome! Thank you so much for this.

Agreed, i’ve read stuff/blog posts on how to do this but your description is very accessible and feels much more attainable to me. Thank you!

It’s so beautiful, I love it!

Agreed, this sounds more accessible/doable than my previous understanding of darning. And since my favorite socks already have worn too thin in the heel to wear, there’s no harm in trying to follow your lead and save them. I just needed this boost!

Amazing! Thanks for sharing your tutorial!!

Great tutorial! Thanks for making it!

That’s for the tute! Your sock looks like it has a reimagined Africa on it to me now.

Ha ha, yeah looks a bit like a squished Africa.

Thank you all, I hope the tutorial helps those of you who want to try it out. I started out with very little idea of what I was doing, but managed to fix a small hole in the toe of my sock. My best advice is to just try, and then do it again, and again

Congrats! Your Darning Tutorial is one of this week’s featured projects. You are awesome!

Darning has been one of those mystical chores I’ve never truly understood… until now!

Thanks for the tutorial

Ooh I love this, I inherited one of those darning mushrooms from my friend’s mother, and I did sit down to try and darn some socks one day but didn’t quite know what to do! That said, Mr Loops now likes to just give his holey stank socks to Rosie

, and I don’t wear socks enough to make holes in them, but this is a fantastic tutorial and I feel like you could use it to do a funky patch up on jeans or the like as well!

A darning mushroom is a real treasure in my opinion

Sure, you can use it on anything you feel up to stabbing repeatedly with a needle. For jeans I’d suggest a thimble and waxing your thread so it’s not such a struggle to get through the fabric.

I have a few vintage darning mushrooms & eggs, I have even seen new ones for sale at the fabric store. I promise to try darning something with one when I get home from this trip. I might use a fine wool to see if it matches the stretch & squish of a sock.

Thank you for the tutorial, my favorite socks ripped a while back and I’ve been trying to learn to how to darn them but nothing has been as clear as your tutorial

Happy to help! It’s tragic when a favourite pair gets a hole.

For wool socks wool would be better than embroidery thread I think. If you can get your hands on vintage darning wool it holds up really well and behaves like wool (it’s usually wool/nylon).