Christmas in June! Ha. I know it is super early, but I wanted to do something other than crochet and once I got the idea I HAD TO DO IT!

Ok - I’m obsessed with my dog Pilot (some of you may have noticed) and I wanted to make a Christmas thank you gift for all the humans in his life. He attends playcare twice a week for a half day, has a groomer who bathes and does his nails monthly and I have friends and family who have welcomed him into their homes as I hate to leave him home alone and bring him most places with me.

I thought I would make little dog themed ornaments with polymer clay: 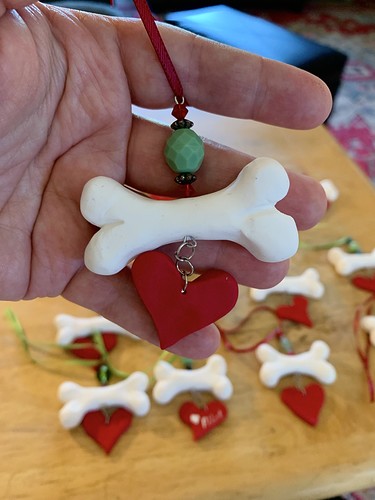 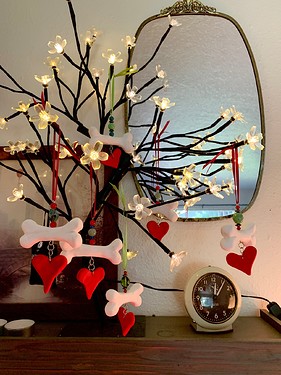 Originally I wanted to do small red hearts that I would adhere to the back of the bone and then paint Pilot’s name next to it, but quickly realized I could not mold tiny little hearts even with my creepy little carnival hands. So I decided to make large, free-formed hearts: 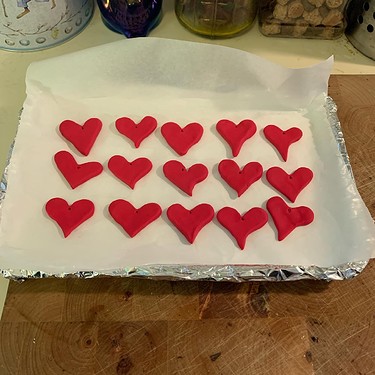 I have a very small amount of beads, but serendipitously I received a fantastic happy mail from @Rlynn that included some great beads that worked perfect for this project: 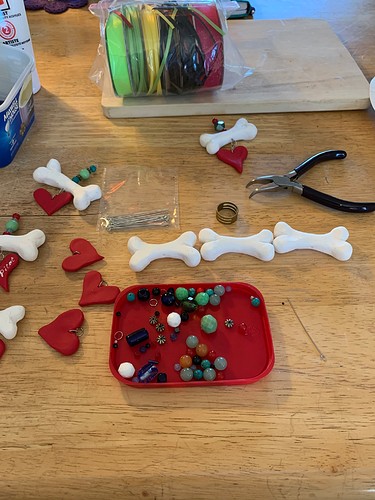 I also used one of the embroidery needles I recently received from @magpie to thread the ribbon:

I painted a heart and Pilot’s name on the back of the heart with acrylic paint. 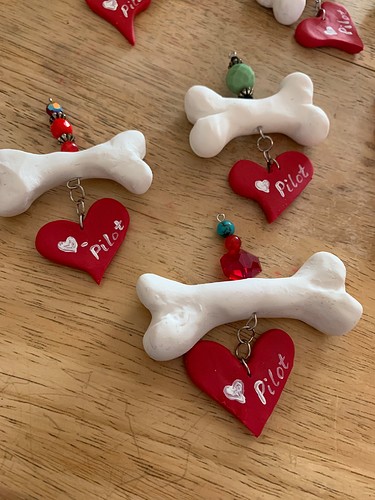 I ended up making about (5) extra to use up the white clay and only have a small lump of red left over. (4) packs of FIMO soft made (16) bones. 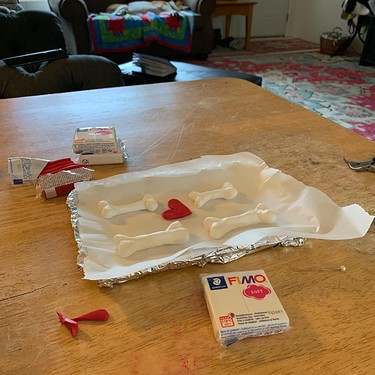 I plan to buy some large Tony Chocolonely bars to go with each ornament. Right now I have them all bagged up and put away for December! 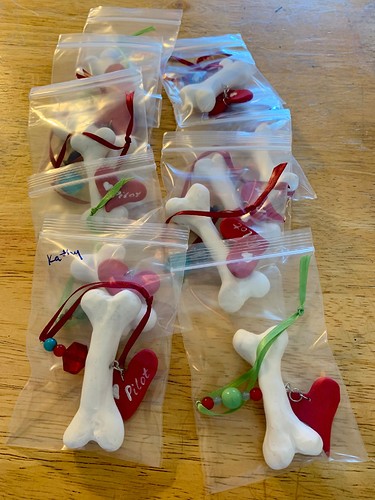 Awwww, these are going to touch the hearts of the folks who Pilot loves!

Oh my goodness! These are just the sweetest little ornaments ever! Excellent use of those beads!!

They will be so fun to give…and with chocolate…hey, great gift for anyone!

What lovely ornaments…they will be treasured

Pilots lives his best life, and so do all of us and everyone you come into contact with that gets to “know” him. Super special fella you have there! Cute ornaments, too!

These are fantastic! I think it turned out for the best that you did the hearts this way instead of the original plan.

But aside from the ornaments…how are you going to keep chocolate stored in your house the rest of the year without eating it?? You’re a stronger person than me.

Easy! I’m not buying the chocolate until December!

They came out so cute!

That is a great head start to Christmas crafting! They are super cute and sure to be loved!

I love these so hard. Seriously-the best.

These are so cute! Such a touching gift! And yay for happy mail!!!

This is the cutest idea. I love the way they turned out. Adorable.

Oh my gosh, the sweetest! & I love that they are a collaborative project. From your crafty peeps to the irl Pilot lovin’ folk. Beauty

Aww what a fabulous idea, I love this! I’m sure all his human buddies will absolutely adore their Xmas Pilot ornaments

I laughed when I saw this… you are definitely a Canadian! Am I the only one who misses Bob and Doug?

Hose off, eh. Lol. Bet we quote it at leadt weekly, just part of the lexicon at this point

Lol! Yes, I speak a smattering French and Spanish, but I’m fluent in English and Canadian!

My husband cracks up every time an “eh” slips out or if I mention runners… at least he understands what a Hoser is!