A few of us who were disappointed that Effin Birds didn’t win the swap poll decided to do a personal swap on discord. This gallery is for those swap items!

I received from Lynx not one, but TWO very fun Effing Birds projects!

First, is a happy strawberry finch, telling it like it is: 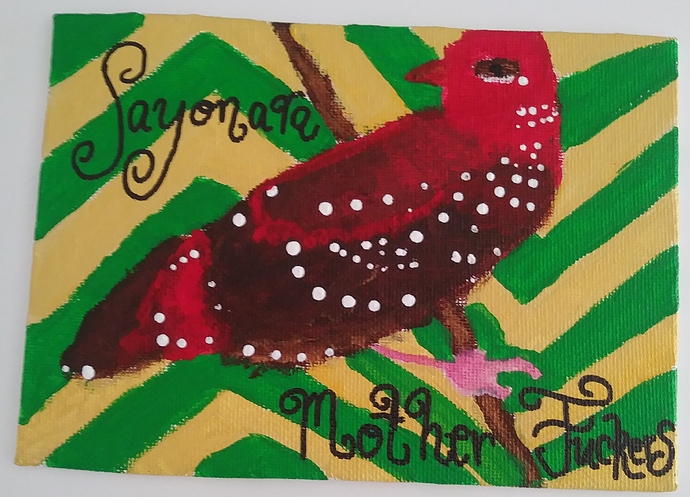 The colors are incredibly vibrant! Painted on 7x5 canvas board.

And then, she bound an entire Effing Bird Book! Featuring puffins! 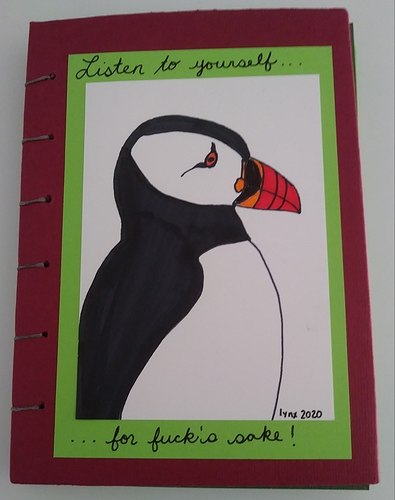 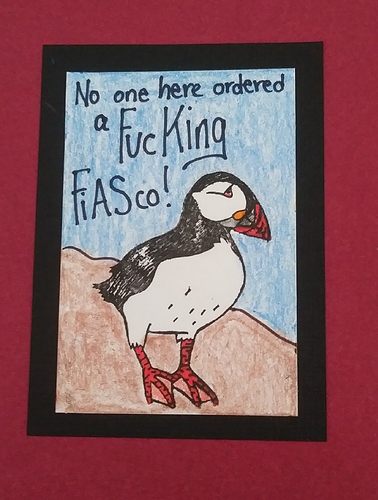 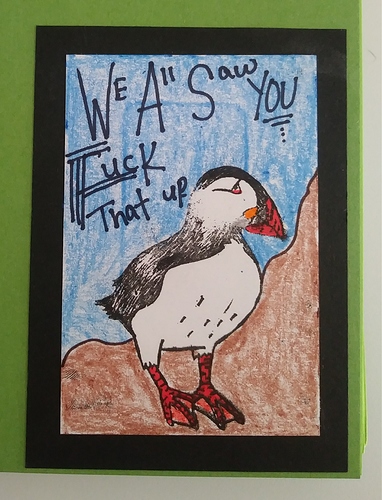 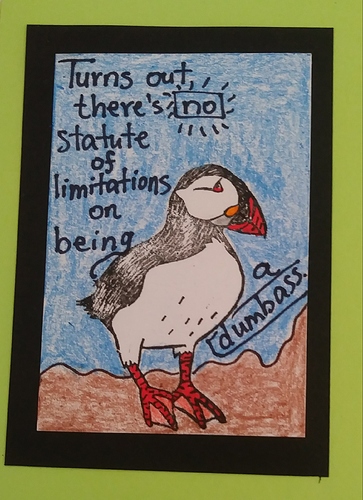 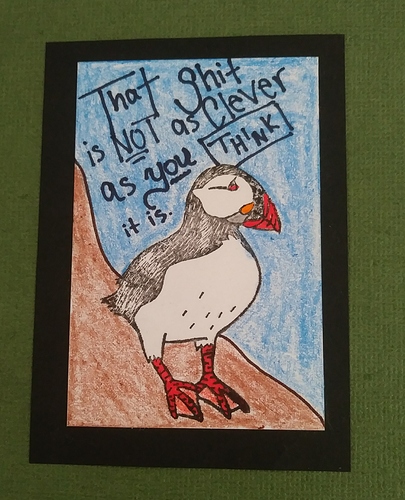 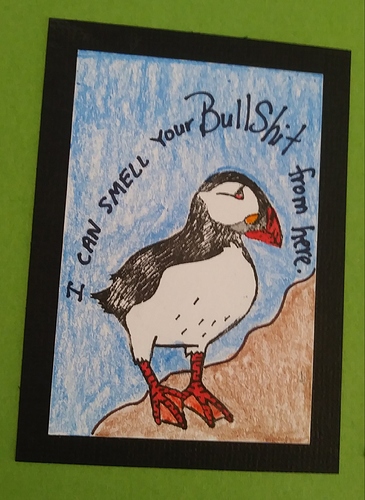 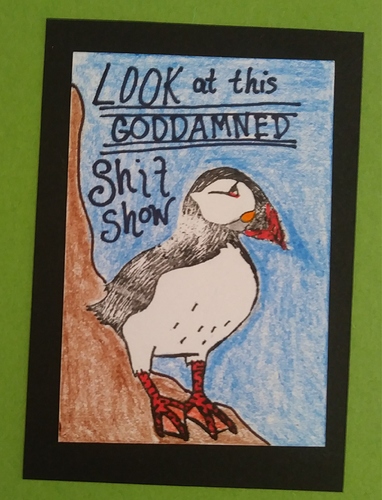 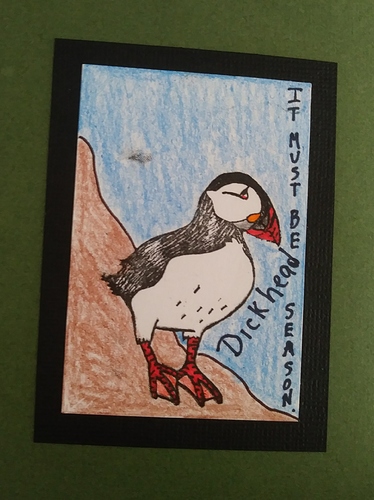 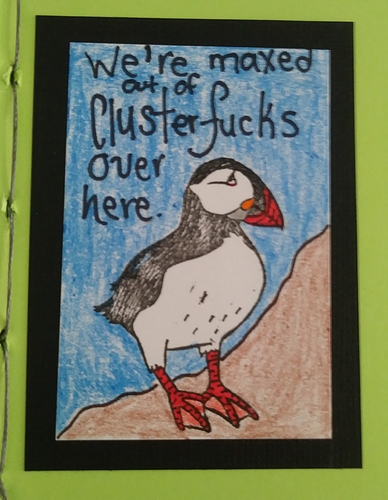 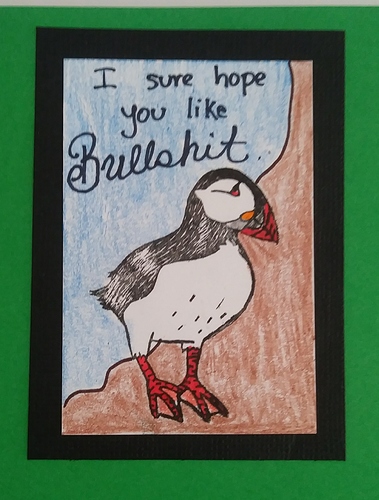 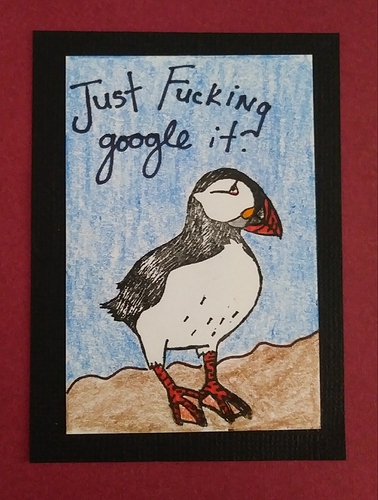 The puffin stamp is hand carved by @AlishaMisha, the green card with green button from @geekgirl, all shipped in a box originally sent by @endymion covered in hummingbirds. I feel like I received from each of you! Thank you!

But thank you most to @Lynx2Lancer! What a surprisingly funny, robust, and useful package! I commit to writing my own covid story in these pages! * throws kisses * muwah!

I love being able to put other pieces from LC members into my swap packages!! And, even though I made this, I giggled all over again when I read them again! I am so glad you love it!

I was honestly surprised by the sheer abundance of swears! Ha! It was such a sweetly snarky package. I hope you like mine to you equally as much!

I’m taking final photos today, and will be posting yours tomorrow!

Oh, I can hardly wait!

Oh, I am CRACKING right up over here, bah ha ha ha ha! Dang, this swap be funny

I received from the super genius @JoyfulClover today! She had a slightly tricky request as swearing is regular vocabulary here. I mean, there are swears here and there (usually under frustration), but that’s it, so I asked for things that could be hidden (like a journal) or if it’s wall art, I’ll put it in my bedroom instead of open areas.

I had no idea what she was concocting, and completely forgot I suggested a bunting (I think I forgot I was considering hanging a bunting on a shelving system in my bedroom.)

Well, look at this teensy bunting I am proudly hanging IN MY LIVING ROOM WINDOW!!

I know you can’t read it well, but it says “Say that sh*t/jive to my face.”
(Below is a cool Jacob’s ladder we’ll talk about soon.)

Oh, it’s blurred you say? Well, the rebel I am is showing the “s” word! What’s so genius you ask? That particular flag is reversible! Check this out:
Now you see curse word:

The super clever Jacob’s ladder:
The curse side is hidden for now:
“Take no sh*t”

And the non-curse side which is showing:
“Do no harm”

This was so clever! Thank you so much!

Bahaha! Look at you, WILDLY hanging that bunting in the open!

I’m so freaking happy you like the package! It was really fun to come up with inventive ways to hide/show the swears, while only using stash, AND hitting the theme!

The bunting features a sassy woodpecker, and the Ladder has a hummingbird (both from your list) on the clean side (plus other birdies). That little Jacob’s Ladder was a beast trying to figure out! MONSTEROUS!

Thank you for swapping with me!

Very groovy bunting but I am just mouth-hanging-open that you constructed a J’s ladder, that is so dang cool!

@Lynx2Lancer that’s great you did a strawberry finch. They are so pretty! And a whole book of effin puffins is awesome.

@JoyfulClover so clever to make both items reversible. Love the idea of a Jacobs ladder!

Thanks @geekgirl and @Magpie! It was a fiddly thing, and since there is writing, can really only be seen on way. But I’m pleased with how it turned out!

@Lynx2Lancer that journal is so good! i am totally wanting to do something like this.

@JoyfulClover the way you got around swearing is SO CLEVER! what a crafty brain you have.

the way you got around swearing is SO CLEVER! what a crafty brain you have.

Haha! Years of hiding my sweary mouth from my mama!

Wow, I love them both so much! I’m floored by the Jacob’s ladder!

@curiousfae sent me the best package! She knows I like assemblage so she took a picture frame and made it into an assemblage piece.
It is fantastic!!!

Thank you so much Kelli! 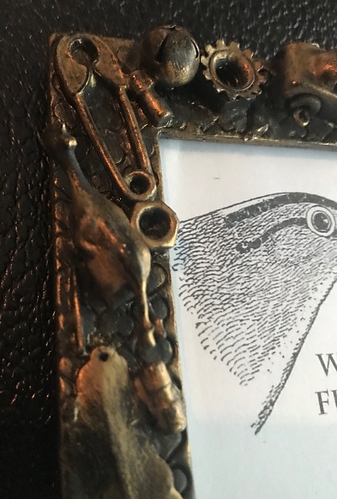 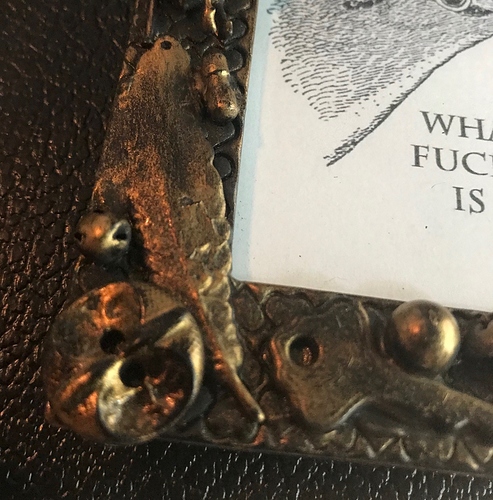 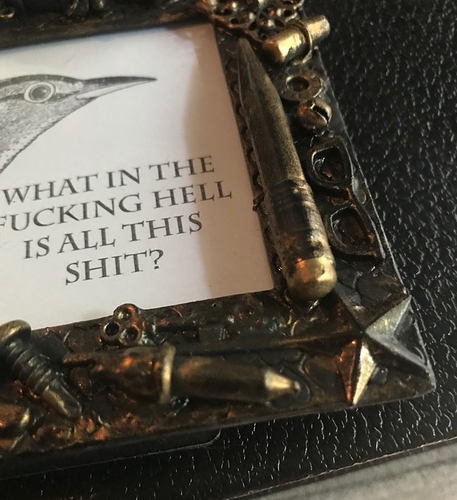 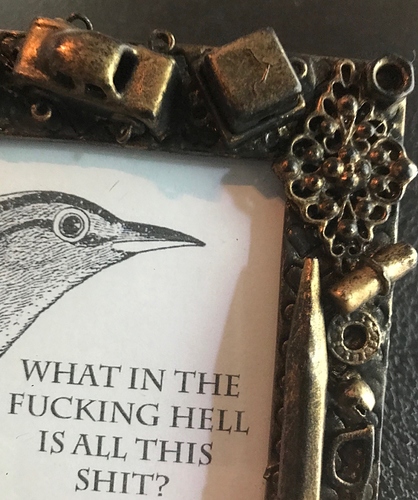 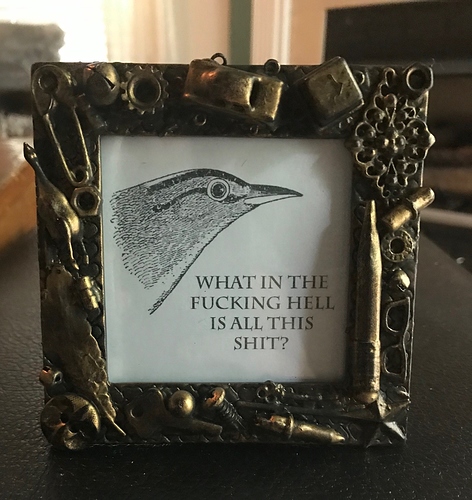 That is freaking awesome!

OMG that is the balls! Frikken wicked Kelli, just awesome.

thanks ya’ll! it was totally inspired by @Magpie. she planted the seed in my brain (the tiny pencil for one…)!
my favorite part is the tiny rubber chicken on the upper left side. you would never know that is what it is but now that you do can you see it? lol

fyi @geekgirl i am now always on the look out for tiny things to make these with! thanks for inspiring us with your work.