I guess these could have gone under jewelry too, but I am more focused on the embroidery part of them. These are my first, true, embroidery type projects. 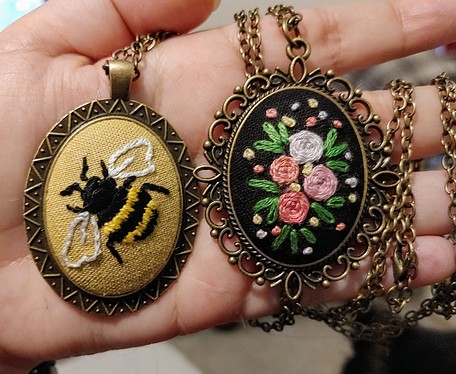 01022115493085×2534 1.75 MB
Each year I try to learn a new skill or tool. This year one of the ones I picked was embroidery. I got a necklace embroidery kit for Christmas and went right to work! The first one I attempted was the flowers. I didn’t use enough thread on the roses, even after pulling them out and doing it twice. I only used two threads when I should have used three. Then I realized I did the colors upside down. Instead of having the darkest color on top, I just flipped the entire image over. I think it still works. My french knots were hit or miss and some are wonky 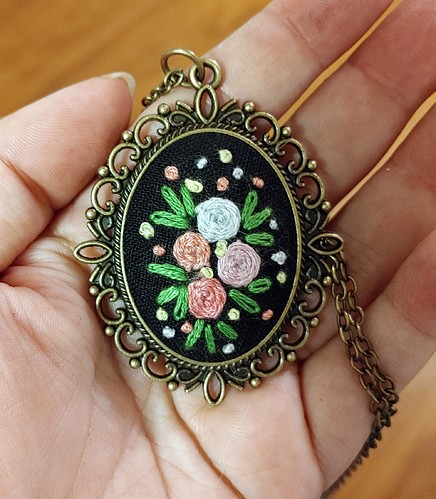 After having made so many mistakes on the first one I declared myself ready to skip the preprinted designs and start making my own. Haha! This one was supposed to be a cactus. I used a Q-tip to dissolve the ink, let it dry, and drew in a bee with washable ink. I thought it was going to be a lot bigger. In the end, I didn’t have space for the honeycombs, which I think it was better without. 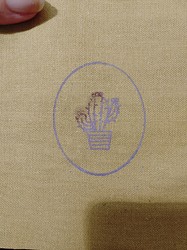 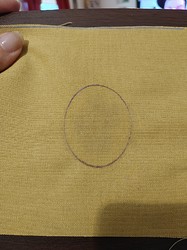 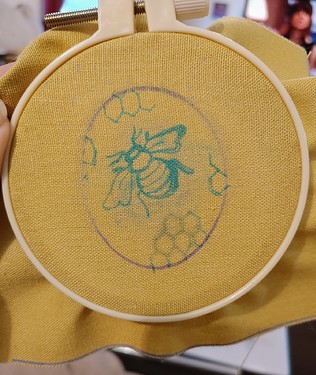 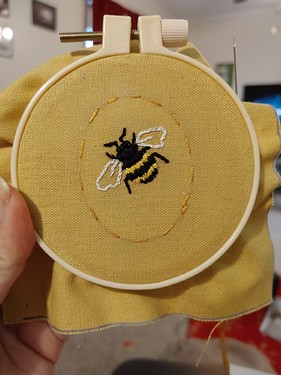 It turned out a lot better than I thought it would. I have two more frames to work with. I haven’t decided what I am going to put in them yet. 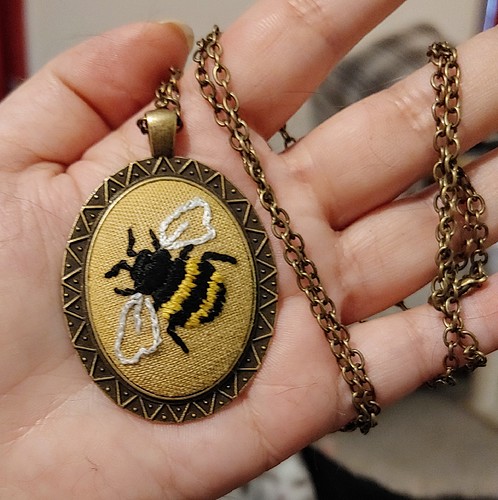 You are doing great with your new skills!

I can’t believe these are your first embroidery projects! They are just fantastic. The bee is a real show stopper.

Those are so beautiful! Such a treasure!

I did not even know this was a thing and you nailed it!

These are beautiful! I don’t see any of your troubles in the final pieces.

My french knots were hit or miss and some are wonky

I love both of these but I can understand your attachment to the bee! Not only did it turn out perfectly, but being your own design it’s going to just feel different. More accomplished.

BTW these do not look like the work of a beginner. Lovely work!!

These are gorgeous! I love how they’re pretty and wearable

I really like both of these, but I truly LOVE the bee!

It turned out so well and I’d never believe that you’re new to embroidery at all.

These are spectacular! Love them both, but really drawn to the bee. You did a great job!

This is such a cool idea. The bee is my favorite.

I adore the bee! Welcome to embroidery! I hope you never go back!

Can’t wait to see what you come up with for the other frames.

They’re both so charming! No one would guess you’re new to embroidery.

Both amazingly pretty, especially for a first and second attempt! And the finishing work getting them into the pendant frames is very neatly done. I also love the bee, but that’s just because I like bees right now. These would also make lovely brooches or ornaments!

These are lovely! Where did you get the frames from?

I got a kit for Christmas. It was either from Etsy or Amazon. I’ve seen them sold on both. I am pretty sure mine came from Amazon though.
If you type in “EMBROIDERY NECKLACE KIT” on either site they will pop up.

Great job, both designs are so cute.
I wouldn’t be able to decide what to stitch😅

If you don’t like the way your French knots look, you might want to do some experimenting with using colonial knots instead in your next projects. They are a bit smaller and flatter than French knots so they don’t give as much of that 3-D textured effect but they’re great for when you just want an embroidered ‘dot’.