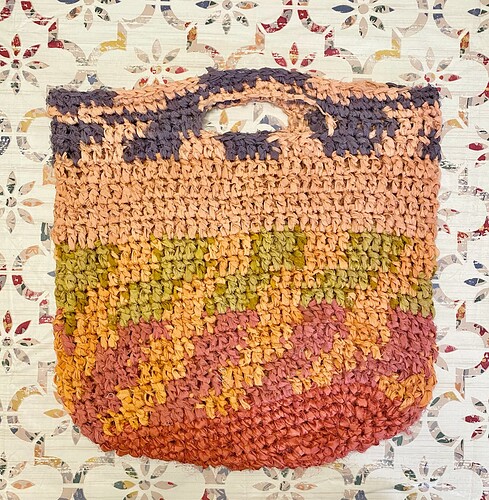 Screen Shot 2022-12-30 at 7.45.35 PM1528×1560 499 KB
I picked up an ombre pack of herb dyed silk chiffon ribbon yarn, during Darn Good Yarn’s crazy sale. There were 5 skiens, solid red, red/orange, orange/yellow, peach, and peach/purple. I don’t have much space in the house we’re renting, so I am trying to use up any craft supplies quickly, and am proud to say this yarn arrived at my house 8 days ago, and is now a tote bag! I used the same pattern as the Purple Silk Chiffon Market Tote, though I added 2 rows of sc, after the row that creates the handles, to make them sturdier. 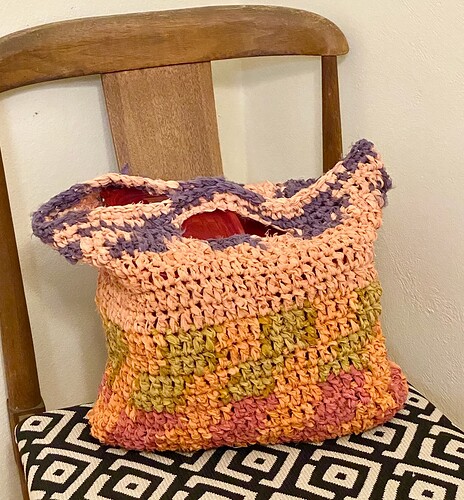 Screen Shot 2022-12-30 at 7.46.31 PM1448×1560 329 KB
I love how the color pooled accidentally on the second and third colors, creating diagonal stripes of orange. I wish the colors were more accurate on this photo. In person, they are warmer, but still peachy. The gold is more sunflower yellow, and less green in real life. 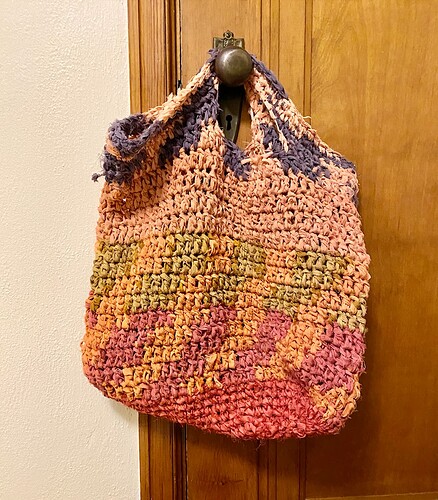 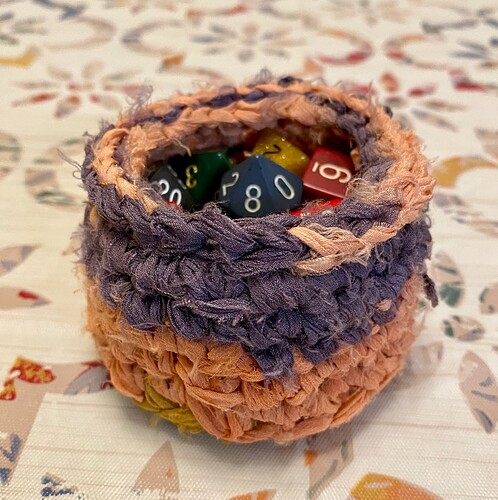 After I was finished, I had a little bit left over from 4 of the 5 colorways, so I whipped up a little bowl for my husband. He had to pack up all his D&D stuff, which is currently in storage, including all his dice, and his dice bags and bowls I made him. So in order to play with friends soon, he had to go buy a few more dice yesterday. They’ve been sitting on our coffee table in a paper bag from the store. Now they have a cozy little home! 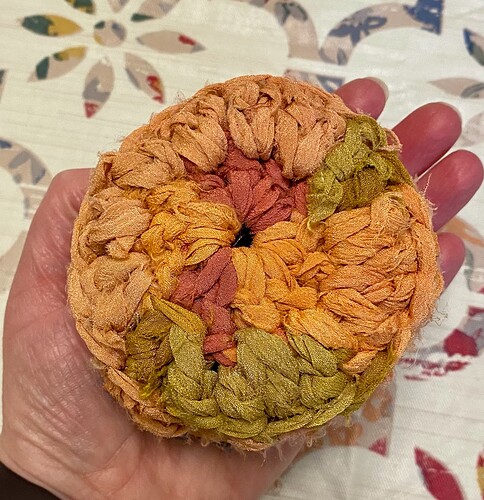 What a good use for that ribbon yarn!

Love that you are finding crafting time during this chaotic and exciting new adventure!

How are the little ones adapting? (human and canine!)…hang in there!

8 days! That has to be a record!
These came out great, Good choices and I like how the color pooling worked out, too.

This turned out great! It’s so nice that you’re settled in enough to craft!

I love how you had juuuust enough left over.

“he had to go buy a few more dice yesterday”

D&D folk looking for any reason for new dice.

I need a D10 for a new yearly quilt project, the two who live in this house were like, “no. NO you cant have one,”

I thought the diagonal stripeys were part of the pattern so that ia cool colour pooling.

How are the little ones adapting? (human and canine!)

Astrid has finally stopped thinking we’re about to abandon her somewhere. She’s claimed the entire couch, and while she wants to go with us whenever one of us puts on a coat, she’s no longer trying to ‘escape’ outside to be sure she can go along. (She never tries to get outside just for the sake of going exploring. She wants to be home on the couch at all times. When she has accidentally gotten off her runner before, she just comes back to the door and waits to be let in.) She’s even gotten to meet her new Vet here, for a senior wellness exam. She approved of all the petting.

Ada seems game for whatever is going on. She wakes up happy, plays happy all day, and is super excited (and does a little happy dance) when we put her down for naps or bedtime. She’s becoming more mobile, though still won’t quite crawl, and loves playing in her playpen or on the floor with her toys. And yesterday she got her first two teeth! So beware, she’s gonna chomp all the things!

It’s so nice that you’re settled in enough to craft!

Having the rental house already furnished helped. We basically just packed nearly everything we owned, keeping out about 2 weeks worth of winter clothes. Though it would have been nice to be able to take inventory before moving in. We have just 4 forks/knives/spoons, 5 plates, etc. But somehow 16 giant plastic tumblers too big to drink from, but no normal sized glasses. One spatula, but 7 wooden spoons. No mixing bowl, and no ice trays, etc. I woke up, and wanted to make bisquick pancakes this week, and ended up having to go to the grocery store for a bowl to mix them in. Jim had to go buy 2 pint glasses, in order to invite a friend over for a beer. And I had to pick up 2 Harry Potter rocks glasses, in order to have juice or wine. LOL

D&D folk looking for any reason for new dice.

Totally! He picked some up at a store called Enchantment Alley, which is a weird mix of New Age/Witchy stuff, candles, crystals, Harry Potter merch, fancy boardgames, tabletop RPG games & figures, D&D books, dice, and other ‘misc’ stuff. LOL They have a Gamer’s Dungeon down below the shop for local meetup games.

Meanwhile, while looking at the website for the Winter Market (indoor farmer’s market at a nearby 60’s mall), we discovered there’s a local dice maker here, who comes to the market with his handmade resin dice each week. They are (quite rightfully) expensive, at $75 a set, but we’re looking forward to picking up a set from him, to support a local maker, and so Jim might be able to meet more local players.

The colour pooling is SO COOL!

I was just going to say that! It looks like an intentional design. Love it!

That yarn is amazing! Beautiful colors.

I loved reading your update as well.