One of TheMisterT’s employees is hosting a department potluck barbecue/cookout this afternoon. Said MisterT is making a couple of side dishes and I signed up for a sweet baked good. Thus, Hamburger Cupcakes! OK, Cheeseburger Cupcakes! 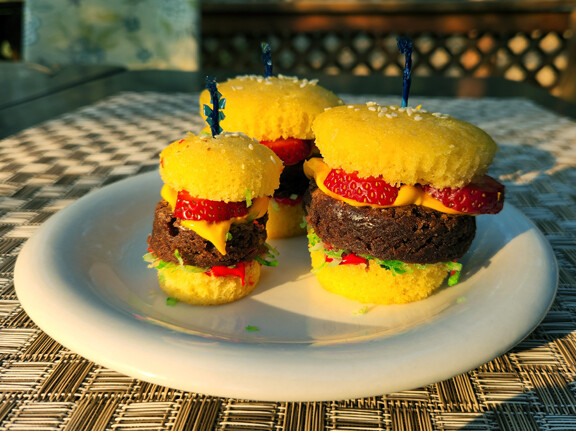 They aren’t really so orangey-yellow, but smoke season has started and it makes the daylight very orangey.

Normally, I really enjoy baking from scratch, but it’s been so hot that the extra work in the kitchen felt oppressive, so these are made from boxes: the buns are yellow cake and the patties are brownies. Here’s how they go together: 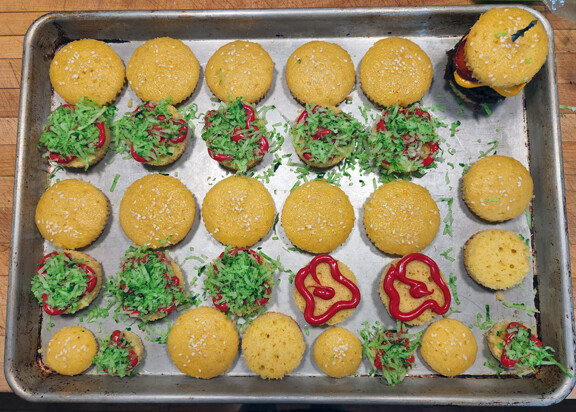 Sprinkle green-dyed coconut lettuce over the ketchup. I left a couple coconut-free. 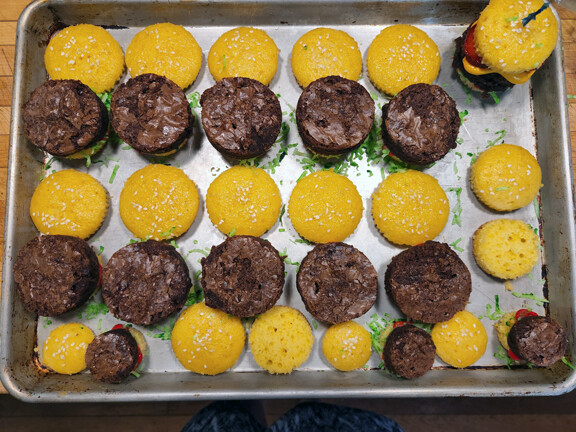 Add the cut brownie over that.

Pipe on cheese-yellow frosting. I went with a sort of square-ish shape to hint at a slice of cheese vs a cheese sauce even though I’m not convinced it worked with this particular frosting which wasn’t especially firm. The squares are not filled in - there’s already a lot going on AND this seemed like it would make them more stable. I saw where some people use a square of yellow fondant which looks great, but I don’t know that I have met a single person who likes to eat fondant. 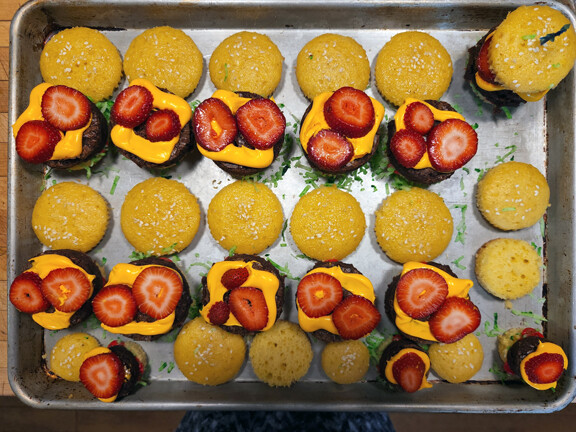 Add a few sliced strawberry tomatoes. I removed the “tomato” from one.

Add the top bun and use a pick of some sort to keep the stack together.

I had just a tiny bit of left over cupcake batter so I made a few mini cupcakes. Luckily, I had enough extra brownie to cut a few mini circles, too! So there are three little sliders!

This photo shows the color a bit more accurately. 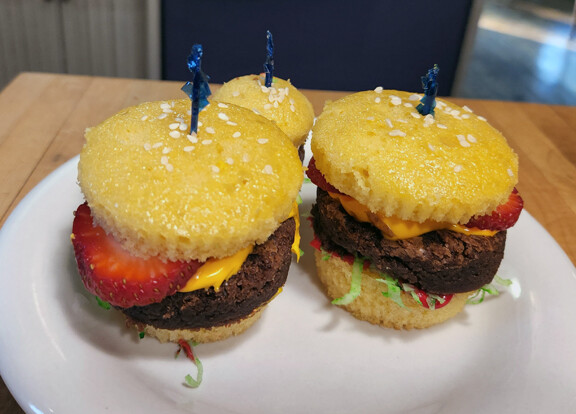 I didn’t plan ahead enough to make a fancier sign to go with these which I do like to do, but I did want to let people know what these contain and which ones are different which I marked with a cellophane-toothpick code. 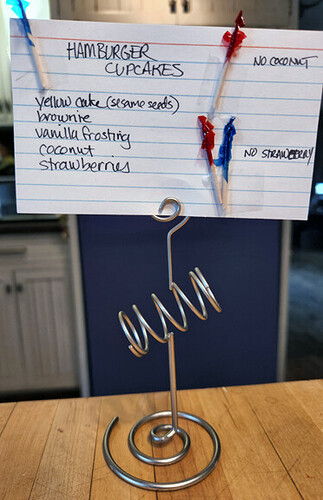 If I ever do this again, I might go with a less-moist yellow cake just to make a slightly more bun-looking top. I might bake the brownies in a larger pan than recommended to make them a little thinner to make these just a little easier to eat.

I’m in love with these!!! How did they taste? I’m trying to imagine a bite with a little bit of everything. There’s a lot going on in there!

These look amazing! I may have to borrow this idea.

How did they taste? I’m trying to imagine a bite with a little bit of everything.

You know, they’re pretty dang good! I tried one of the “sliders” and was able to get it all in one, inadvisable, bite. The strawberries & coconut really make the look and the flavor in my opinion.

I may have to borrow this idea.

These look awesome! I’ve done the 'nilla wafer version but these are classy! I’m 100% stealing this!

'Nilla Wafer version!? What is this magic of which you speak? [runs off to search the interwebz]

EDIT: OMG! Those are adorable! And they would not have heated up me and my kitchen like all this baking and mixing. D’oh!

Too faboo!
You’re ready for The Kids Baking Championship!

Oh, these are all kinds of adorable and sound delicious!

I like fondant. (But never Wilton’s. Only fresh and homemade. There is a huge difference.)

Thanks, pals! They were a hit and I only came home with a couple. Whew!

I like fondant. (But never Wilton’s. Only fresh and homemade. There is a huge difference.)

I bet with fondant the premade vs. fresh, homemade is HUGE.

These are are SO. STINKING. CUTE!

The fondant I recently made for my grandson’s cake was made with marshmallows. It was pretty tasty!

Thank you! Maybe I’ll give that marshmallow a try sometime when it’s not so dang hot and I feel more like taking my time with baking.

They look so tasty. I’m pretty much drooling over here.

You went the extra mile! I bet these were a huge hit. They look scrumptious!

They actually were pretty tasty - which is not necessarily the case with many novelty cakes and cupcakes to my tastes. WHEW!