Hey all! Long time no see. I’ve been bustling with a new baby and running my bakery biz, but after a lovely little piece of happy mail from a member

I was inspired to pop by and share my latest crafty project.

I’m a member of a local community theatre, and we’re coming up on a production of Alice in Wonderland. I’ve been tasked with making puppets for the show, including the Dormouse, the Cheshire Cat, the White Rabbit, and this guy – Humpty Dumpty! I just finished him up the other day. 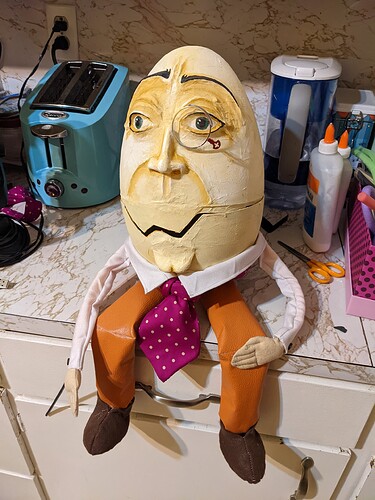 Humpty’s legs are weighted with rice, and the top of his head has a cupboard door handle attached to the back, so he operates kind of like Terrence and Philip, for those who are familiar.

He started as an oversize green Easter egg, which I sculpted onto with air dry clay, and then smoothed the seams and gave him some wrinkles with hot glue. 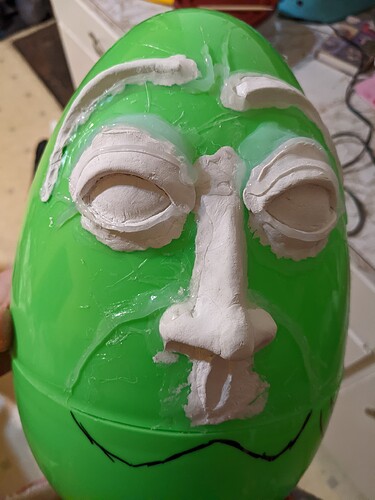 I then papier mache’d him up… at this point the director told me he was getting Shrek vibes, haha. 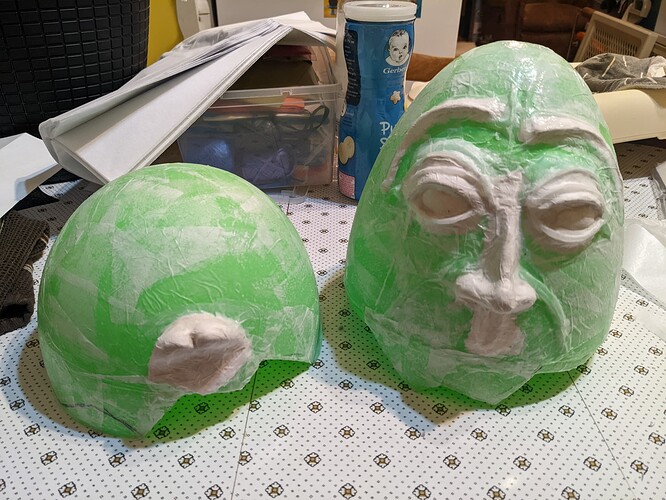 Last up before figuring out how to dress him was the paint job. Then I just grabbed a bunch of things and pieced them together as best I could to make his clothing and limbs! His arms are like little pool noodle type things, so they’ve got some bend to them. His cravat/tie is made from a vintage necktie, which I believe belonged to my friend’s dad.

His shoes have little cork soles, his hands are tiny sewn mittens, and his monocle was something I bought at a costume store eons ago and never used. 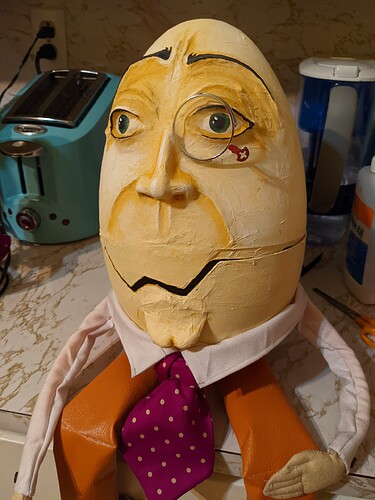 And the director just sent me this photo of him on his hedge today.

I can’t wait to see him in action. 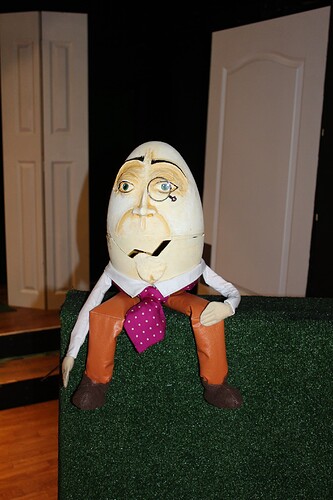 Next up… Cheshire cat. Eyeballs are made, now on to the rest!

OMG, this is amazeballs. WOW!

Congrats, so nice to see you

fabulous! great character in the face.

for the cat; shouldn’t you have started with the grin?

Wow, this is awesome!! Glad to see you again!

Impressive! They clearly picked the right person for the job. It’s great you still have time to create, even with how busy life has gotten! I’m looking forward to seeing the next puppets.

I really love all the details around the eyes. So much depth, on an egg!!

Your Humpty is magnificent! I do hope you share the rest of your crew.

Haha! My husband is working on the mouthplate, so I guess a bit of both.

Can’t wait to get that cat built.

I definitely will! The only other one I’ve finished is the Dormouse, but he’s a little hand puppet and I keep forgetting about him since he wasn’t nearly as labour intensive.

This is all around amazing work! How awesome it will be to see it in action!

Also love that some happy mail brought you by.

This is AMAZING! I absolutely LOVE it. I think the eyes are perfection. Love the addition of the monicle. Everyone is going to be enamored with this. I can’t wait to see the other characters you make!

Congrats! This piece of amazingness is a featured project this week! You rock!