After I posted the White Rabbit and Humpty Dumpty puppets I made for a production of Alice in Wonderland… I’m back with my imagining of the Cheshire Cat!

Before I terrify you all with what it started out looking like, enjoy this production photo from our wonderful photographer! (You’ll also notice our Alice is played by a senior – she had a lovely take on the role). 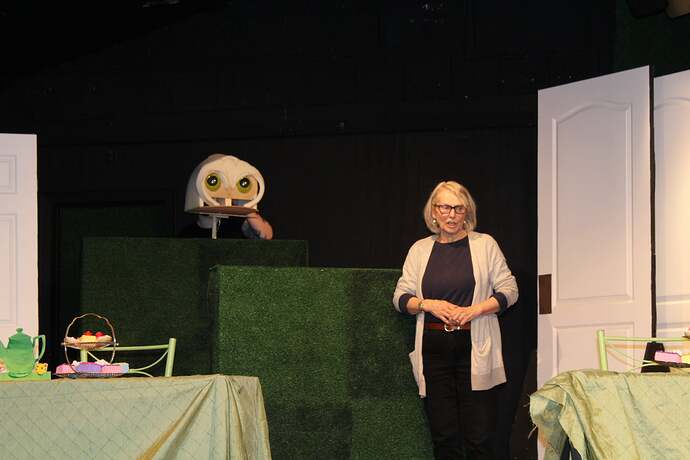 It started as a pair of (moving!) eyes, built based off of a YouTube tutorial I found. My husband built most of the mechanism after I tracked down those clear Christmas ornaments which are IMPOSSIBLE to find in Ontario in May. I ended up buying some from a woman on a local craft buy and sell!

Here's a brief video of the eyes

Then he (the cat, not my husband) got padded up and I started putting on more fabric and foam. Sadly not many process photos. I’m bad for that. 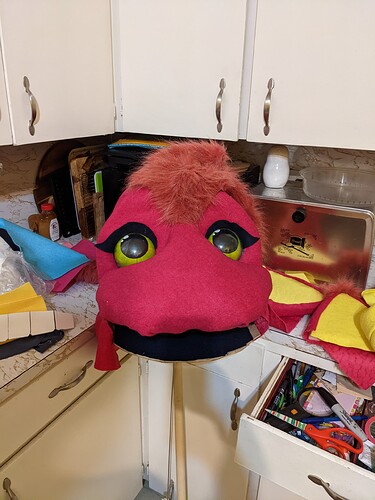 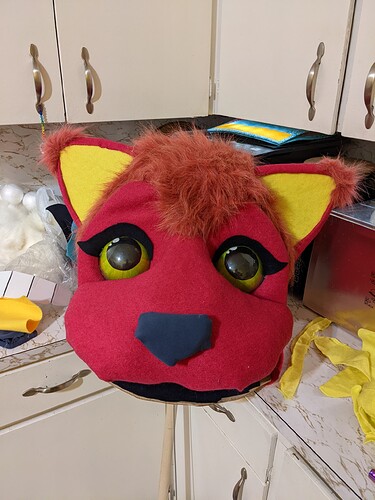 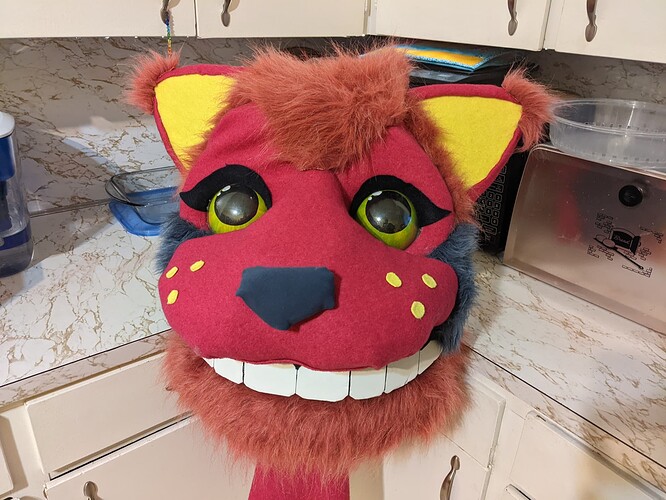 About four days before opening night I panic sewed some paws and a tail! 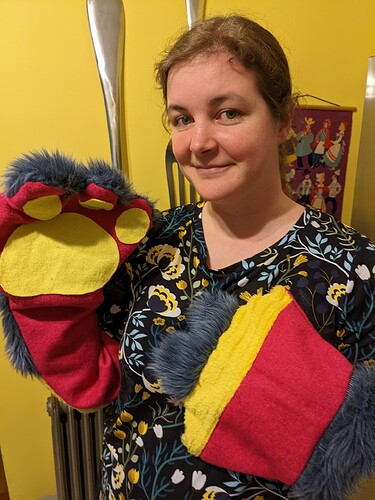 I also made a “toy” version to appear in Alice’s non-Wonderland life. 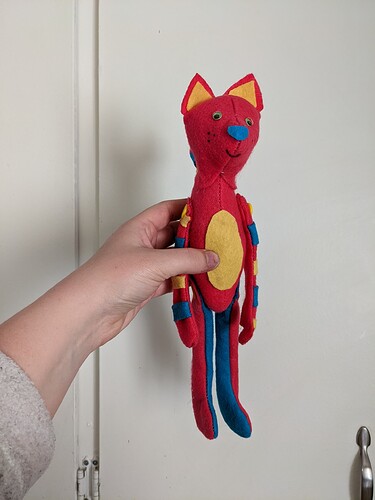 On stage, the mouth and eyes were manipulated by the person doing the voice, another person puppeted one paw (the other was left limp), and the tail was puppeted by a third person. It had quite the lovely effect, especially as the scene was lit in blacklight! Gave it a really cool vibe. 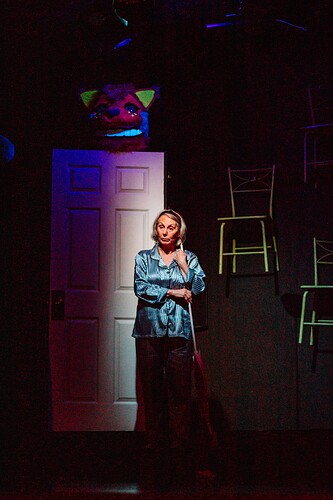 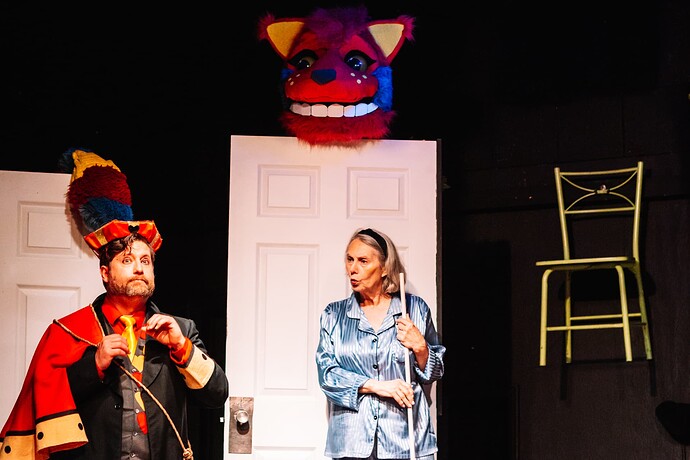 I would have liked to have had a little more time to touch up some bits. I planned to remake the nose as the rough edges bothered me, and touch up some seams, but honestly – once I saw it on stage it didn’t even matter!

And here I am with my new pet 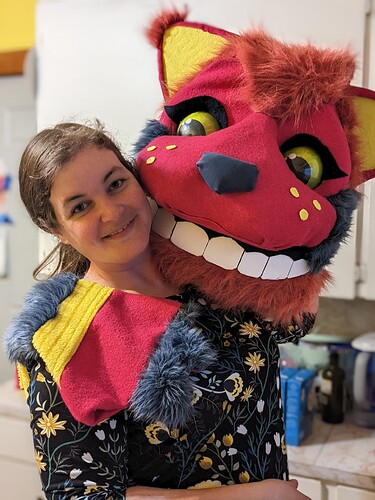 While it was fun to see all of these characters come together, I am definitely looking forward to a bit of a break! I’m in a short play showcase coming up in a couple of weeks, but I’m acting so there is minimal prop building for me to do, though I’m sure I’ll find something. I’m already plotting a wearable window frame, haha. We’ll see!

Incredible! Your Cheshire Cat is puppet is brilliant! Thanks for including the video; it was fun to see the eyes in action. Wish I could have seen the production!

YOU are a wonder! I am so glad you shared your Cheshire Cat along with your others. Really, really impressive!

What?! Those eyes are the coolest!!! How amazing! I’m just in awe over here.

This is fantastic!! Perfect grin and moving eyes— BRILLIANT!

Out of curiosity, what show are you going to be in as an actor?

I just finished a run of Vanya and Sonia and Masha and Spike by Christopher Durang in which I played Cassandra, and coming up I’m in a ten minute play showcase called 10x10. It’s all local playwrights, directors, and actors, it’s a really cool event! I’m in two of the ten plays - one called An Uber Christmas, which is a tale about a previously homeless man and an Uber driver (that’s me, your friendly neighbourhood Uber driver with a secretive past! Ooooooohhhh) and another called A Man Dies by the Gun, which is a Western comedy. I have a hilarious role which is mostly physical comedy, then fainting and lying motionless for half the play.

It’s a ton of fun. Can’t believe it’s only a couple weeks away!

Sounds like SO much fun! Your roles sound especially fun to perform. I love that it all features local playwrights, too.

WAY back in the day, I used to act in “Playwright’s Theater” performances at a local tavern. (Usually directed by the playwrights themselves.) It was a blast, although we had minimal costuming and no real sets to speak of.

I am officially in awe! This is fabulously amazingly wonderful!

Wow, this is too cool! Love those eyes and the doll detail is perfect.

Just amazing! I especially like the little cat for non-Wonderland!

Your super cool craft is one of this week’s Featured Projects!

You are so talented

Woah, wow. The progress pics are an education in themselves!

What a difference lighting can make! In the theater it looks creepy, but in plain daylight it’s endearing.