I built a harp!

This board seemed the most likely place to put it. 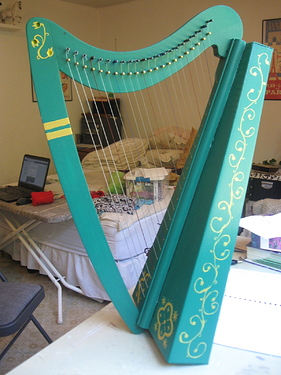 Back in the thick of quarantine, when stimulus money arrived in my bank account, I decided to stimulate the economy of a guy in Connecticut who makes these harp kits. The frame is wood and the soundbox is heavy duty cardboard. 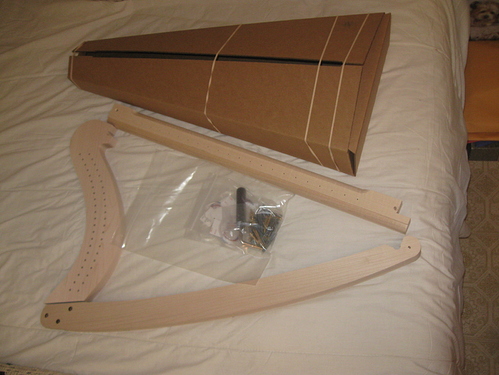 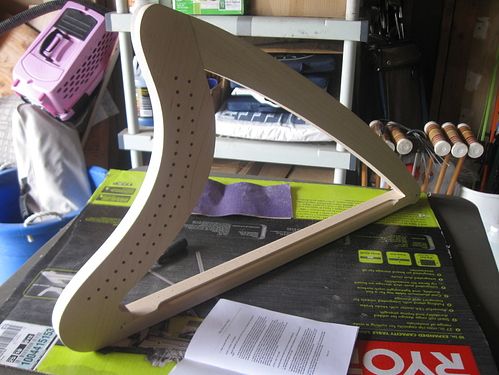 Friends, I have been working on and off on this thing since May. I don’t think I’ve ever had a project with as many mishaps as this one. It was no fault of the kit or the instructions – don’t get me wrong! All I can figure is that there was a gremlin on my shoulder through the whole process. I’m not going to bore you with it all, but I can sum up by saying that nearly ever step had to be done twice. The biggest and skeeriest issue was when the harp frame slid off alignment on the soundbox while it was gluing, so when I went to string it, the holes were all blocked. I had to use an exacto knife and pry and scrape it all apart and damaged the box quite a bit in the process. I was freaking out. Yes, I could have ordered a new box from the man, but I had already put all this work into painting the designs on it! I repaired the damage with papier mache, but in the end I had to repaint the whole front of it anyways. 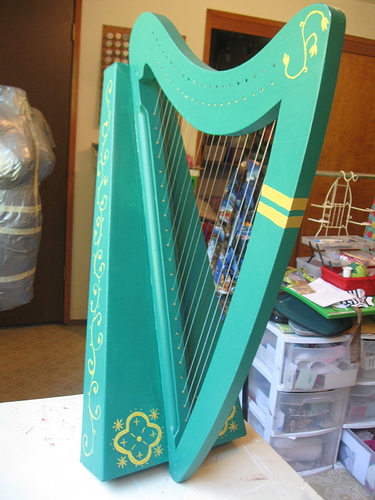 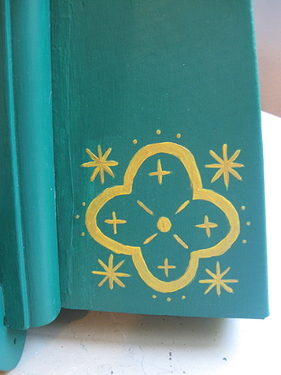 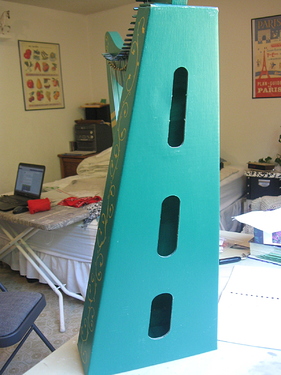 Yesterday afternoon, I finally got it all strung and tuned and playable. I have never played stringed instruments of any kind so this has been fun. The sound is pretty nice. I don’t know how to do video on here (and besides, it’s not like I know what I’m doing yet). I have a friend who is working on making a beginner harpist booklet that she is going to email me. Hopefully someday I can play something pretty!

This is amazing. Mishaps or not, it looks great!

This is really cool! I’m glad that you persevered and made this harp happen! Nice! I like the color, too.

What a great way to stimulate the economy! It sounds like a frustrating process (I’ve endured many of those), but the outcome looks great!

Wow!! What a project! I admire your drive to do something of this scale!

You are unbelievably awesome!

gremlin on my shoulder

HAHAHA This made me laugh so much, been there before.
Have fun learning to play, looks wonderful

What a fun project! I love the details you added to the painting.

WOW! That is way cool!

WOW! Be right back-picking my jaw up off the floor

I’ve been to his workshop. He does all kinds of cardboard-based instruments. He’s amazing. And the instruments sound pretty good. Not concert quality, but a great way to try out instruments, have fun, and learn how to play without spending a lot of money.

I love your harp, it’s so fun.

Thanks, everybody! I’d like to say it was fun, but, haha, it sure wasn’t! But it’s fun now! @NowThatsPeachy I’m sorry that stinking gremlin has plagued you before, too!

@marionberries Oh, that’s cool that you’ve visited his workshop! Good thing I’m not going to be performing any concerts, huh?

I had wanted to learn harp for a long time, but even itty bitty used ones are way expensive.

It was probably leprechauns.
But I’m sure they’ll be nice now that it came out so beautiful!

I love that base color!

But seriously, congrats! What a huge project and a cool thing to say that you made yourself!

Wow! I love this. I was surprised at how big it was when I followed the link. Yours looks beautiful.

Thanks, @pookie and @artsycandice! Green is my happy color.

It is bigger than I really wanted, but apparently I had unrealistic ideas about what size a “lap harp” ought to be. But it’s ok. Now I’ve got to make a case for it…