I made a Smeddley snail!

I have trouble reading patterns so I don’t usually even bother, I just look over shapes and try to muddle though. There is such great curvature happening with @Smeddley 's snail pattern though that I had to at least try it out and see if I could follow along. I did get a little lost and ended up having to do my own thing at a certain point but I managed the important bits, the curves in head and body. 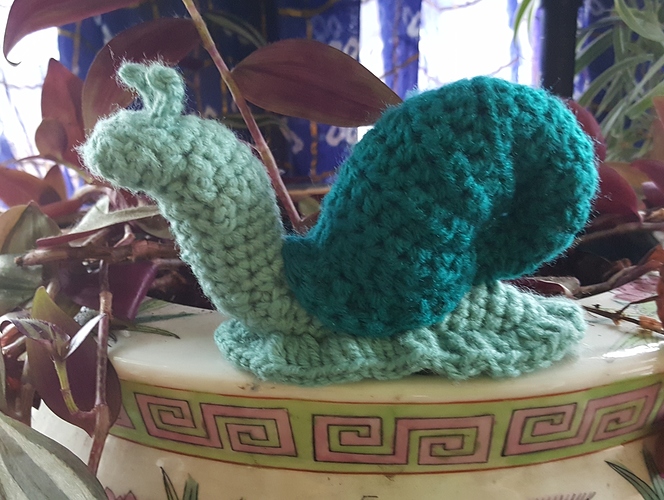 20200426_1322201792×1348 1.41 MB
For the shell I used a variation of Twinkie Chan’s pizza pattern, adding an extra stitch at the ends of every other row to make the sides curve, then doing slip stitch, single crochet, half-double crochet, double crochet and then reverse along the top edge for a couple rows. That made a triangle that when joined along the sides, naturally curved in a bit to form the shell and left that nice edge that joins to the body. 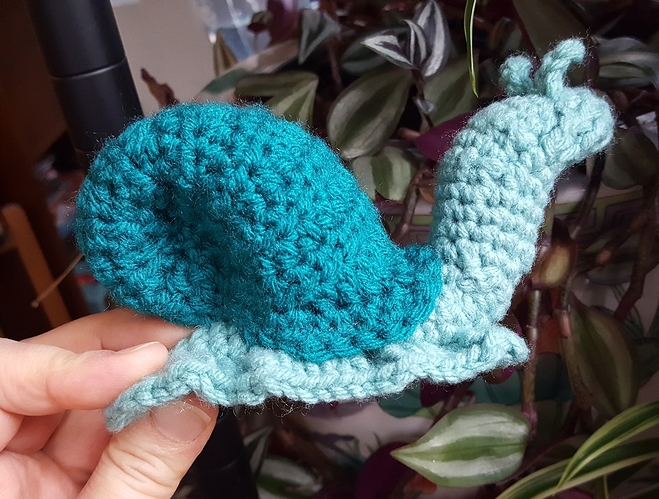 It was a bit bigger than I anticipated so won’t work for the Snail Streak garden themed board game/mini art quilt I’m working on. I figured out a smaller pattern for that but I’m really glad I made this one. I am feeling the urge to surprise some house-bound neighbours with a little fun porch crochet abandonment project. Gotta figure out the perfect recipient for this little buddy.

It looks nice! I actually really like that shell…

Oh my goodness. He’s soooooo cute! The ripples around the base are so lifelike and the antennae are adorable.

He is super cute!

It looks so cute.

So precious!! And the tone-on-tone is brilliant!