This is a fairly recent make! I think I finished it in October? My starting point was Simplicity 1558 with some input from Simplicity 2777. More on that in a minute. First, the reason I chose to make this:
Last winter, I was going into the library when I saw a woman in a short pencil skirt, nylons, and heels heading out to her car. It’s February. There is snow on the ground. She is obviously freezing. And the thought occurred to me: Fashion is stupid. Not that she didn’t look nice, but could she still look nice and be warm at the same time? Having turned 40 just a few months before this, I had been spending a lot of time thinking about life and stuff and one of those thoughts was, “Ima wear whatever I want to wear regardless of current fashion.” That thought was also inspired by that young man in London who wears Regency era clothing everyday (the BBC interviewed him awhile back).

So it was with all that in mind that I made this skirt. It covers my legs (plus I wear thigh-high knit socks and “granny” boots). So: warmth

I suppose functionality could be debated, but so far it hasn’t impeded me a whole lot. I made it out of linen which I probably wouldn’t do again. All those ruffles are heavy. By the end of the day, I’m ready to get out of it because the weight pulls it down in the back causing the waistband to cut into my stomach. Not fun. (But! I am working on a corset and wore a test version under this today and the structure of the corset kept the skirt from digging into me). 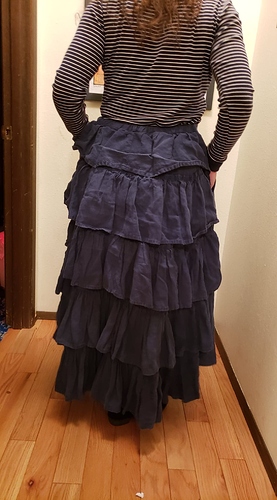 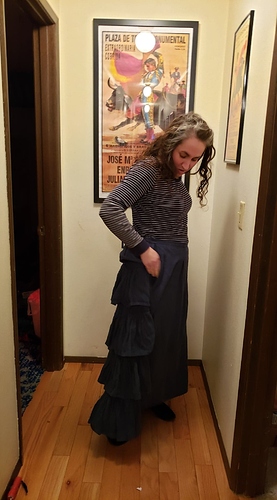 The original pattern has a zipper in the center back. Well, I have been having some weight fluctuation (mostly in the upwards direction, hmph, thanks 40s

) and didn’t want to “outgrow” my new skirt. Elastic didn’t seem right to me since the front panel is supposed to be flat. This is where S2777 comes in – last year sometime I had made the bloomers and they used a ribbon drawstring in the back. I tweaked the pattern and did the same thing on the skirt. The ribbon ties are sewn inside the waistband at the side seams, so when I cinch it up, the only gathering that shows is over the top ruffle. My helpful dh tucked in the ribbons before he took the picture, so you’ll just have to imagine it. The other tweak I made was putting in pockets!!! Because we always need pockets. 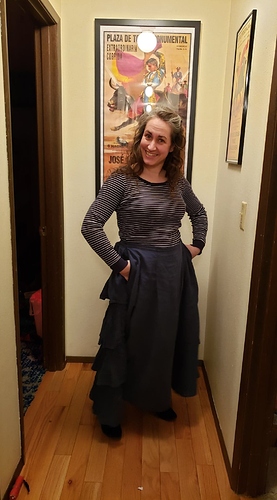 You are a queen!

Ye-ah, be comfortable wearing whatever you want, I am ALL about that action. Not at work, sadly, because that’s in an office, but everywhere else. I see high heels all winter long and I just can’t even. Just WHY?!

Your skirt looks amazing and I’m sure you can solution out some sort of solve for the issues you’ve found with it. Even if that means cutting into it for a resew. I have done, it’s lots of work but ultimately satisfying if it means wearable comfort. Love the pockets. And the shirt, stripes are it!

It’s probably a good thing that I don’t have to adhere to an office dress code!

I have been ruminating on solutions to the waistband problem. I’m thinking if it weren’t so narrow it wouldn’t cut in as badly… Yeah, it’s a hassle sometimes to have to cut into already made things, but you’re right; in the end it will be better!

Great work! I love you’re ‘I’ma wear what I want!’ attitude. I feel the same. Every time I see an add that tells me I should wear certain makeup, or a new fit of jean, etc., I just kinda look at them and think, ‘nahhh…’.

If you’re having trouble with the weight of the back pulling the skirt in that direction, you can try a theatre trick, of sewing weights into the hem on the front side. There are such thing as fancy hem weights, sold for that purpose, but in my costume shops we often used flat metal washers, sewn in. Cheap, flat, and easy to obtain.

Now weights are something I had not considered! Thank you for that tip!

Love it. The ruffles are fun! And yay for being warm! Being warm is very important in my book. Plus it looks great on you!

I’m definitely a wear what I want type of person as well. Being in academia gives me a lot of wiggle room to push the boundaries on what is considered “professional” wear. I’m probably considered the wacky professor.

It looks great and I love you put pockets in it! We need more pockets!!!

Wacky professor is cool. Plus, you’re in Portland. I’m in Olympia. Those are two cities where you can pretty much get away with anything.

This skirt is EVERYTHING. I’m about to have a landmark birthday in a couple of weeks (like, after this birthday you sort of stop celebrating the fact of your birth / life, and for future “landmarks” you’re really celebrating the fact that you’ve made it as far as you have and haven’t died)… I need this skirt. I may need to pull out my sewing machine and give myself a challenge

I love it and I love your attitude.

@MistressJennie is your gal for tip to fix this kind of thing. She’s knows a lot.

All things…need pockets…I’m SO lost without pockets. This is totally awesome! I SO admire anyone who can do clothing…it is NOT even remotely my forte. Unless of course you are 4. Then I can make you dresses. lol.

This is so beautiful! Pockets and ruffles!

Celebrating the fact that you haven’t died!

Yessss! Make the skirt! It’s all kinds of flouncy fun.

It’s great that you decide to wear whatever you want, and I guess even though there are certainly things you might change for the next skirt I think you did a fabulous job with this one

And this is certainly something you wear because you WANT to, not because of what other people might think and how they might look like you. I hope that short pencil skirt lady likes to wear the clothes she put on, because if not then it doesn’t sound like fun walking like that in the snow, even if it’s not far.

I second the hem weights suggestion; I think balance is what you want here.

I like my heavy ruffles a little shorter these days (after ~20 years of preferring floor-length skirts, I stopped wearing them when I found myself carrying a baby and a teacup up the stairs multiple times a day) and just layer them over leggings and/or leg warmers if it’s cold.