I’ve had some LuluRoe leggings in my closet that I purchased, but rarely wear. I bought them when I was trying to “get out of my comfort zone,” but I’m honestly not in my comfort zone wearing leggings in public and definitely not these colorful ones. I’ve been wanting to try to transform them into something for some time, but never had the guts. Then yesterday, I watched several youtube videos (not in English) of someone making a quick transformation. They did no-sew…in fact, they used a glue gun. This leads me to believe this transformation isn’t meant to last very long at all.

So, I took some of main concept: cut the neck around from the crotch area and then how to measure to figure out arm placement. This was a little tricky because most of the videos I watched were not tank tops, but some version that didn’t have the sleeve straps that tanks have. I figured I could lay down one of my tanks for the general idea. That worked somewhat.

I did not have enough of the colorful LLR legging, so I cut into one of my favorite pair of jeggings. what???!! Well, it was getting holes and I need to replace anyway. I was hoping I’d have enough fabric between the two, but alas no. I need to actually lose some of my waistline (I’m trying…just not seeing yet, but that is neither here nor there.) So, I put it aside to work again today. I decided to just go ahead and see how come of my cotton fabric would work. I was a little worried because it wasn’t stretchy, but since there is enough stretch from the leg/jeggings, I was good.

I had to figure out several things: how to bring in some of the upper black fabric (I cut a 3" line about halfway in the middle, then sewed it on #2 on my machine. That seemed to work.) Then I traced one of my tanks for a better arm hole because my underarm area was huge, and even though I was conservative on my cut, it was too much, so I had to adjust, plus I had to bring in some gap around the arm straps. Once I figured it out; I made some small pleats, I tried to just sew the edges of the straps, but it looked weird. I didn’t have enough of the jeggings to cover the sides, so I thought about the black fabric. I was worried again because it isn’t stretchy, but it worked. Instead of folding both sides over like bias tape, I just stitched around again to tack down the stretchy fabric. Then, I used the black fabric as bias for the neckline and it worked ok.

(I know this all probably seems slightly confusing without pictures–I started to take some as I went, but when I started to worry it wasn’t going to work out, I stopped.)

Anyway, here it is! My legging to tank top transformation! 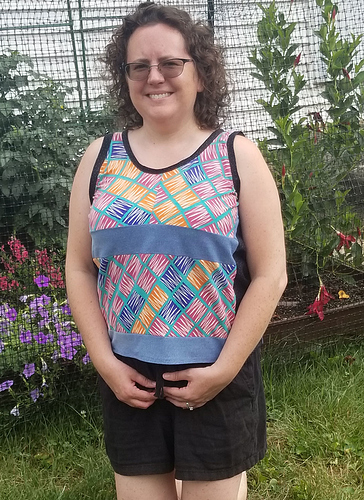 I like how the jeggings separate the pattern and saved me from attempting to pattern match!
It fits!

I ended up making the underarm slightly too close for my liking.
I wish I didn’t need to use the black.

All in all, I am proud of myself for figuring out this project and making something wearable and that looks ok. Even though I’d never buy something like this from a store.

(See our cute tiny container garden behind me? We have 6 cherry tomatos, some herbs, and then flowers.)

I think it turned out well, especially with all the trial and error you had to go through! I think the jegging fabric placement was a good call – it helps break up the wild pattern, and using the black as bias tape makes it make sense on the side. Good transformation!

That turned out really well, and I would never have thought it started its life as two pairs of leggings! Having the solid and the patterned sections help tone down and unify the busy legging design.

That also gives me ideas for a shirt recon I’ve been meaning to try or commission. I cut the shirt apart years ago and now I’m missing a few pieces, so it needs a good redesign.

@wittychild: Thanks so much!
@grenouille78: Thanks! Yes, I was thinking the same thing about the black bias making the black strip make sense!
@calluna: Thank you! I just don’t have the best shirts in my wardrobe to make leggings make sense, and even those jeggings I used and love, I didn’t really feel super comfortable wearing with certain things.

Now, I am super curious about your recon mission! Go forth and conquer!

That looks great, you did a really good job

Wow, that looks great!
…and nothing like the wonky mess I was expecting from your description.

I’ve been shopping in my donate-to-goodwill box lately, and reworking items I once thought I’d like but fell out of love with. Some have been great, others went back in the box.

lol I think it looks great…I also have several pairs of those leggings that I fell our of love with…I mean seriously, I do not want a bright orange umbrella right at my crotch…

I like how you toned everything down with the solids.

I probably will just give mine away…sounds like a lot of work…lol your $100 tank top! Good job learning new stuff!

LOL I forgot that LLR was that pricey! The jeggings were from Walmart, so I guess the tank top isn’t quite $100.

You did a great job! I would have never guessed that your new tank top originally started life as two pairs of pants! Using the blue strips in between the solids was a smart move, I like it all around!

lol I was also counting in your enormous amount of time!!!

hey, but you got something no one else will have…and you look very nice in it!!

Great re-purposing of leggings, I love a bit of creative recycling! It looks great, and love your lil garden too

Thanks everyone! I need to go back and reinforce seams; lots of fraying from wash. I didn’t want to do that until I saw how it fit, etc.

Nice!!! I like how the two pieces are split and not just one block.

Well done! Looks great! I have a pair of leggings that are really loud. Maybe a recon is in order at my house, too!