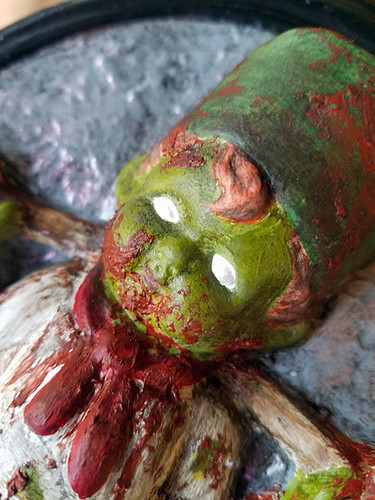 Last month a friend of mine who resells vintage and antique items in a few places offered me these too-chipped chalkware plaques of little Dutch children carrying buckets on yokes. 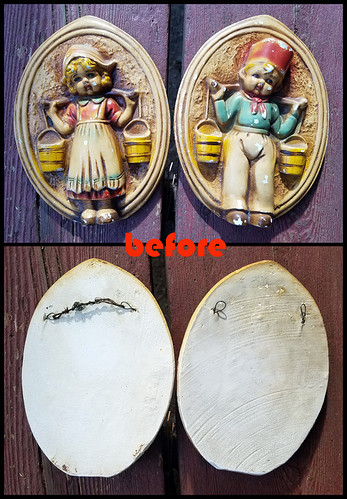 I didn’t know of a home for them with me or someone I know so I declined, but then I couldn’t stop thinking about repainting them for Halloween! A couple weeks later she still had them, so I picked them up and went to town ruining 'em up! 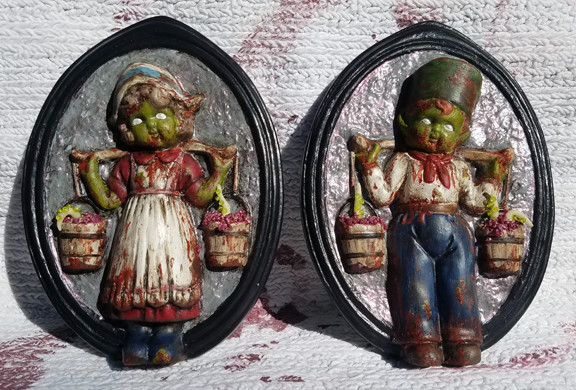 After washing and giving them a good going over with steel wool, I primed with with a paint/primer combo housepaint I had around. Then I just played around with craft paints and artists acrylics I had on hand. 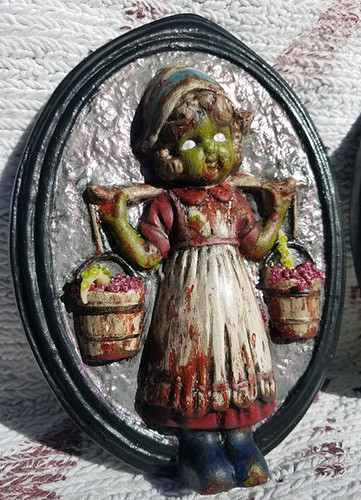 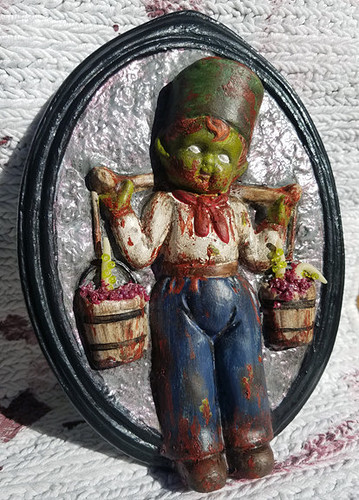 I tried to turn the chips into holes in their cloths by adding green skin and red blood in the ones I could find after all the painting. I also added brownmud on their boots, hems, knees, hands, bucket bottoms and blood/gore all over! 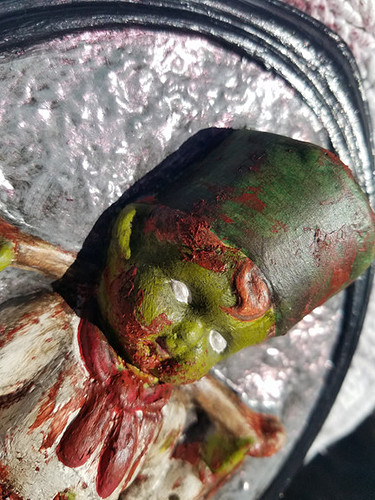 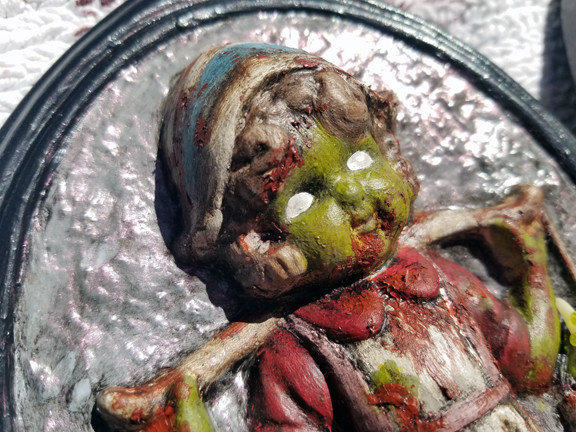 Then the whole thing got smeared with black glaze. After that dried I added “interference red” acrylic with a dry brush on the grey background and pearlescent white in their eyes. 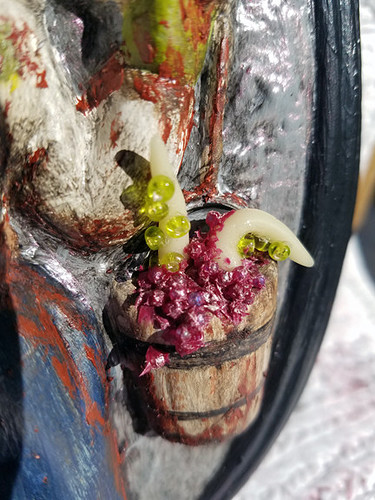 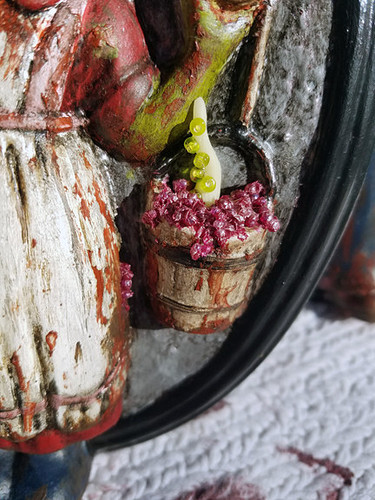 Of course, it wouldn’t be “realistic” for them to be hauling water or milk in those buckets so I made some lumpy, gory gunk from mixing a few colors of artist acrylic paint, acrylic medium, and plastic beads. Once that dried I added a touch of the red interference paint to it, too. 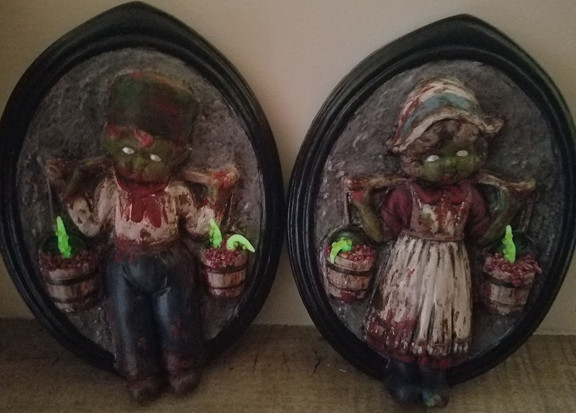 While I applied that mixture I glued in these tentacles that I made with glow-in-the-dark Fimo that I glued glass seed beads onto for suckers!

The backs were kind of dingy when I got them and since I didn’t mask them off, they were a little sloppy with paint, too. So I covered them with some vintage felt I picked up at the thrift store years ago and added a “signature” window thingies, too. 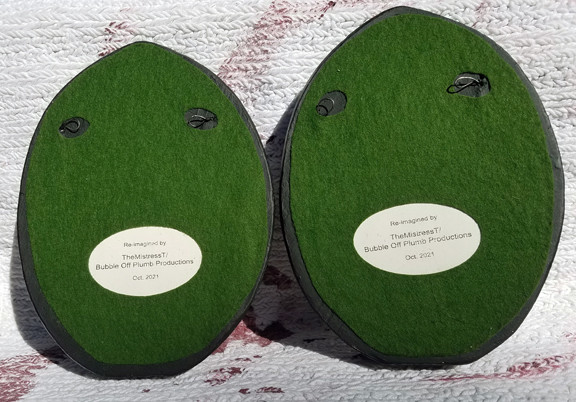 After the photo was taken I added picture wire and for now they’re hanging in the guest room until the end of October.

ADDENDUM: I forgot to mention that all the materials used to redo these kids came from stash. YEY!

What a brilliant transformation! So cool! I love it!

Just enough gore and guts to make them special for the scary season! Loved how your repurposed them into something fun rather than have them go into the landfill…new life for old things is a wonderful theme for our planet…

The after is so much better than the original!

Thanks so much everyone! This one was a decide-as-I-go project which is not my usual way, so I especially tickled with the result!

Super creepy in a double take kinda way. If I saw those hanging on the wall I’d have to look twice to make sure they weren’t watching me

I always thought those dutch kids were creepy and you brought out their true nature. But I’m not sure I’d want to sleep in your guest room this month! Perfectly creepy!

@marionberries We’ve no guests expected this month… lucky for any potential guests! The guest room is where Halloween decorations that aren’t part of some kind of “scene” tend to end up.

These are awesome. I love the gore! What a great transformation into holiday decor.

These turned out SO GREAT!! I love them!! Now I need to be on the lookout for semi-trashed things like this, that could be repurposed into something extra awesome!

I love the gore!

That part was so fun!

Now I need to be on the lookout for semi-trashed things like this,

I now have to control the urge to hoard these kinds of things for eventually repainting them.

These are RAD! So creepy and awesome.

You definitely took these from blah to epic Halloween decor! I love that the tentacles glow in the dark!

I love that the tentacles glow in the dark!

Me, too! I didn’t even remember that I had GITD Fimo, but there it was in the polymer clay bin!