When I saw my partner in the Little Good Things swap, @Watsonc7, liked ATCs, I knew what I had to make. She mentioned some of the themes she was collecting for were animal-human mashups, animals wearing clothes, and various TV fandoms from her Pinterest, so here’s what I came up with. 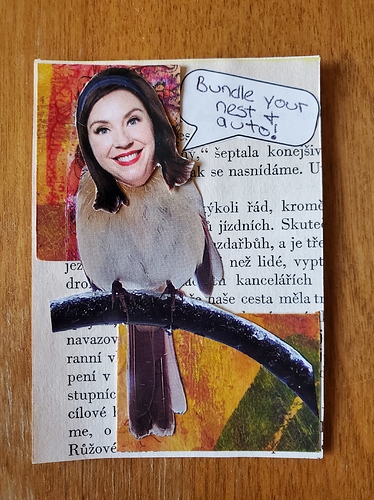 The bird came out of an old freebie calendar. The smaller rectangles behind Flo are cut from a masterboard I received from @Wulf in a masterboard swap when this community was still on Craftster. And actually, the bookpage behind that came from @Smmarrt in that same swap, so thanks for the assist, team. 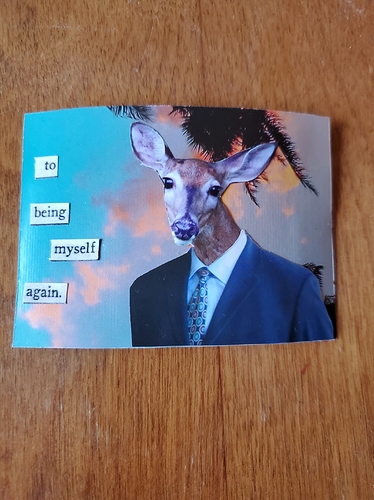 The doe here came from the same calendar as the bird; the background is a different calendar page, and the suit is from a photo of some random guy in my city’s local magazine 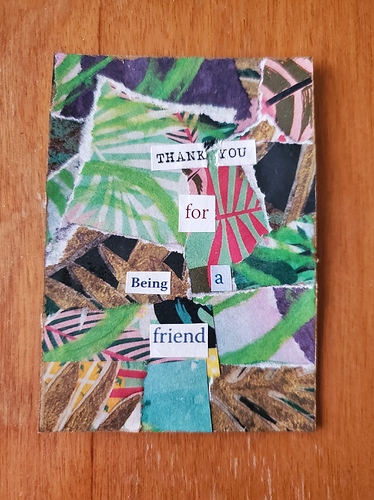 Finally, I saw some Golden Girls pins on her TV board. I didn’t know whether she was collecting for that show, but I couldn’t let that shared fandom go unrecognized.

Thanks for looking (and, you know, being a friend)!

That’s the best thing about masterboards: so many ways to to use them and share the love!!

Flo-Bird…I need a deal on my nest and auto please!!

they are cute and a great mashups

So glad to be a (good? bad?) influence

Funny side story about Flo: This was my second attempt at using her. My original plan was to put an animal face in her hairdo, so I spent part of New Years Day meticulously cutting Flo’s face out of her head and feeling like a creep. Then I promptly lost the face on my crafting table for a couple of days.

ha ha I sometimes worry what people think when they walk into my craftroom…there are googly eyes, doll arms, spiders (stuffies!), book -related art, etc. I hung out my black snake wreath for Halloween…the kids loved it but the moms seem to walk on the other side of the street now…ha ha

Flo’s lost face made me laugh…

Fabulous! I especially love the deer in a suit

Great ATCs! I especially love that the birdie Flo ATC incorporated bits and bobs from other members in the community. Kudos!

The deer in a suit is too,too fun!