It is the ONLY flour for biscuits…

( I am being facetious…just recalling snippets of conversation at various family gatherings and neighborhood parties…a lot of conversations are around food, lol…and I got schooled by the woman across the street for adding horseradish to my deviled eggs!)

I have no idea what it’s supposed to look or taste like, but it was nice! The batter for the biscuits was very sticky and I wasn’t sure if it was going to work out but it did. The recipe is similar to scones but with much less butter - I used butter because we don’t have shortening in my country. We can get Crisco in the international foods store and lard is available too, but I didn’t have either of those two on hand. I used wholemeal flour accidentally, that’s why it’s a bit speckled.

I’m so tickled you tried it! That looks like it should to me. I often use butter, actually, because I don’t typically have shortening/Crisco on hand. I just like to make sure it’s good and cold. @Magpie, I’ll send you the recipes shortly.

I have no strong feelings about biscuits

. I use the drop biscuit recipe my mom gave me, but any biscuit recipe, including “Open can. Bake according to package directions.” is acceptable for this by my standards. In my family, we’ve actually started using tater tots in addition to/place of biscuits, so we might be kicked out of the B&G Circle anyway.

Mr Imma actually liked it so much he asked if we had more sausage so we could eat it for dinner as well! (he was out of luck, we had leftover burrito’s from yesterday). It’s very filling, we had it for breakfast and we skipped lunch. It was pretty quick to make too.

Do people it eat with other kinds of meat/vegetables as well or is that sacrilege? It’s basically just sausage in a béchamel sauce, I guess you could make it with mushroom or chicken as well.

We make chicken steak and pour gravy over it…also, mashed potatoes with other foods…I think it is pretty versatile, but we don’t eat it often…

All the fun stuff here! It’s like candy and biscuit land!

I received from @jemimah a very happy package. A delightful bookmark, which I really needed for a new book of articles from Emergent Magazine on ecology, culture, and spirituality. Nice slow meditative reading. The bookmark loves it there!

And a lovely whimsical watercolor. I just know it’s our black cat Felix

thinking of those birds outside the window he would love to make friends with. And the card is so fun too.

Thank you so much, receiving these really cheered me up! 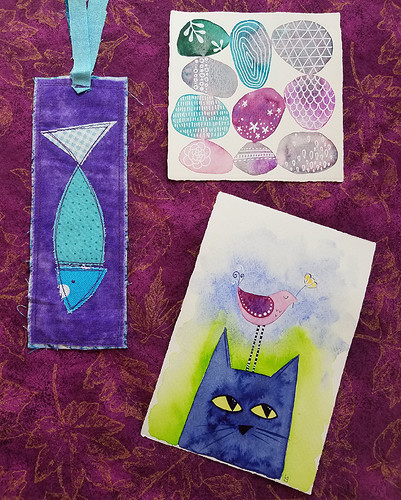 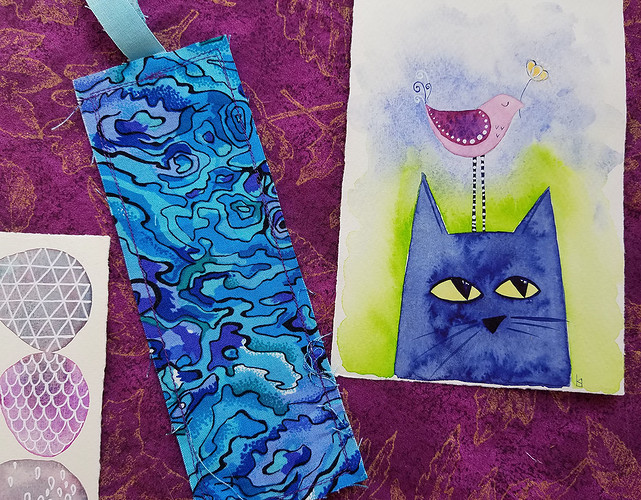 I love that! What a wonderful little trio.

I received from @jemimah as well!
A lovely bookmark and card in her very recognizable style, and she made me some gorgeous stationary. I’m only going to show you the first page because I will be sending it as happy mail later on. And she included the stamps she used to make it too! 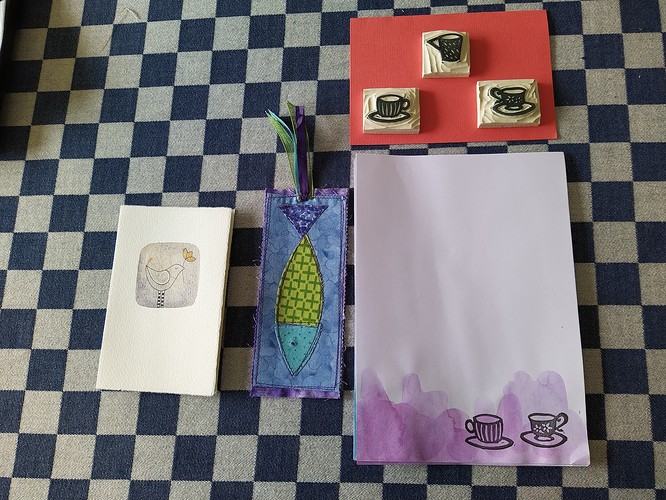 Scrappy and watercolours, my kinda little good things for sure!

I always say papercraft isn’t really my thing, I don’t have a steady hand for painting and drawing, it’s way too difficult for me, blah blah blah excuses. But look how pretty this stationary paper is and it’s so extremely simple.

Awesome stationary! And those little stamps.

I received a fabulous little box from @marionberries this morning! 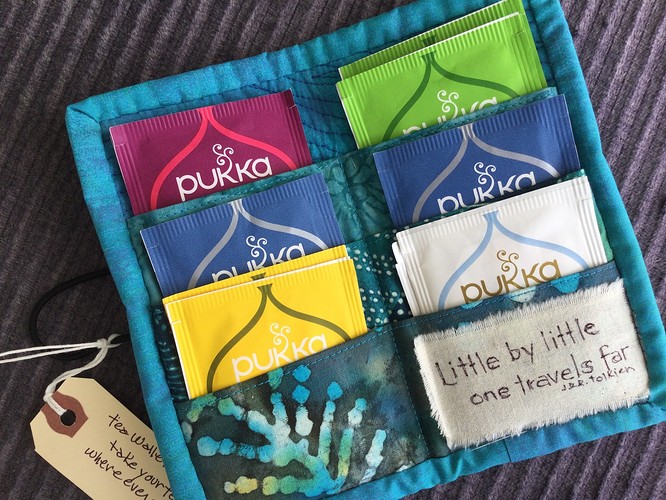 A gorgeous tea wallet, wonderfully textured in my favourite colours, stuffed with lovely tea, and with an intriguing healthy fruit snack to try. I’ve been cutting back coffee and drinking lots of herbal tea recently, so this is a perfectly timed gift, and will be used frequently. Thank you so much!!

Love the scrappy tea wallet…the quote is a nice touch!

Oooh, gorgeous! I am just about to use that fabulous technique to make a journal cover in just those shades too. I hope it turns out as nice as that tea wallet. It really is so beautiful.

Are there little French knots in there?! Gorgeous.

I hope you give decorating your own stationery a try @Immaculata! You’re right, it doesn’t need to be complicated to make something pretty

So glad you like it @jemimah, and that it fits with your tea love. And now where ever you go you can take tea with you. I need to make one for myself!

Yes there are French knots, it’s the foam on a wave, hard to see when it is closed, but it is there on the cover.

@Camelama’s amazing package came last week but I am a lump and just now getting to post it. First we’ll gaze at the wonders of all the extras - some super cute napkins with birds wearing hats, plus some yummy treats. 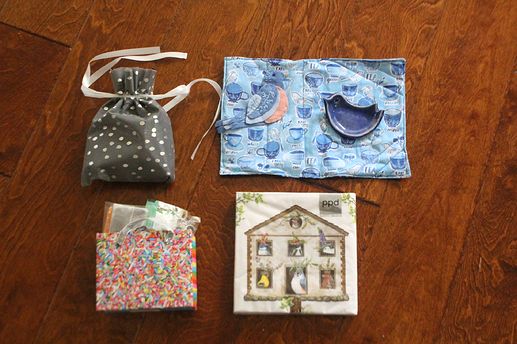 But then gaze on the glory of the rug mug and little birdy bowl/plate. It is fantastic! The embroidery on the wings is such a sweet detail, and the fabric is eerily topical.

Thank you so much, @Camelama! My aunt is going to love everything.