Mini Garden without the Pollen

Not that I’m going outside right now anyway, but the pollen is so awful that if I COULD go out, I’d probably (as @TheMistressT puts it) fall over ded. So instead I made a bunch of paper flowers and plants and created a mini garden to enjoy. I may have lost my mind. 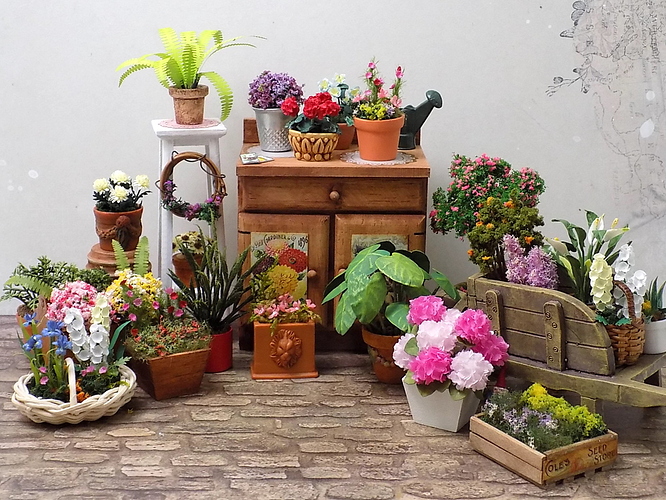 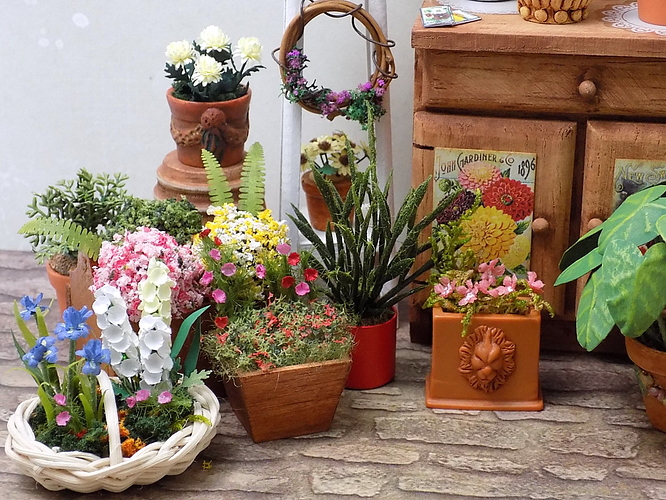 SCooper_Garden21600×1200 428 KB
Nearly all of the flowers or plants were made from cardstock or tissue paper, using a few paper punches for some of the leaves and petals. 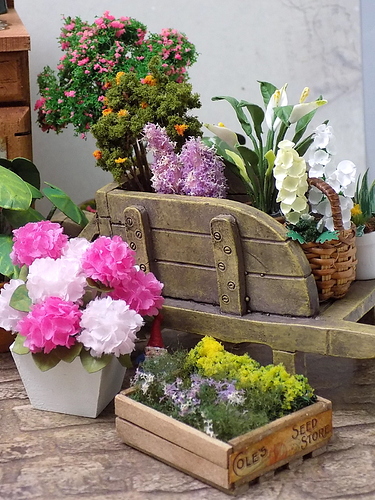 SCooper_Garden41200×1600 446 KB
The flowers in the wooden crate were made with green wool roving and chopped up ground covering for minis. I wrapped the end of some green wire in tissue paper, covered it in glue, then dipped it into this stuff called Flower Soft to create the purple and white flowers in the wheelbarrow. The little tree (also in the wheelbarrow) started out as a mini broom that I cut apart and glued green and orange “underbrush” to the ends, then stuck it in a little planter. 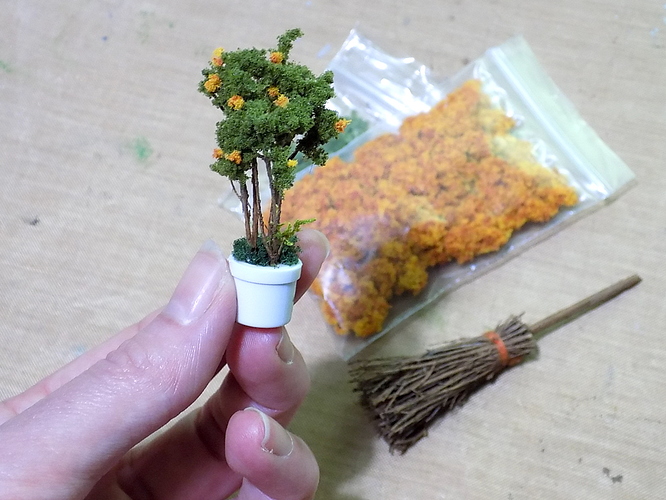 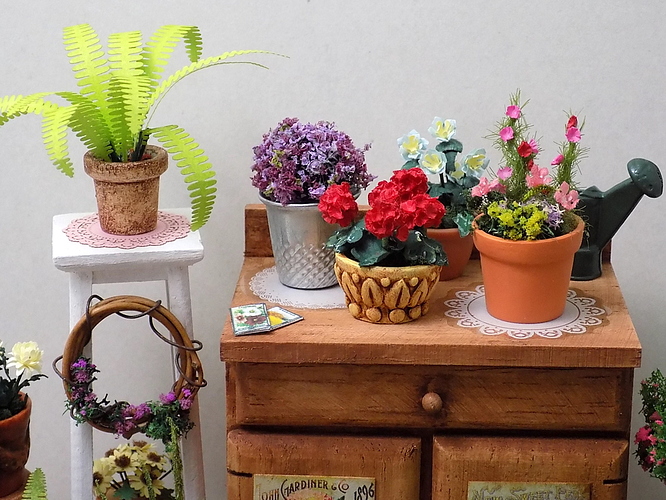 SCooper_Garden71600×1200 415 KB
To make the red geraniums on top of the cabinet; add a tiny blob of tissue paper on the end of some wire, punch a bazillion circles with a tiny hole punch, “cup” those circles by rolling the center of each using a stylus, then glue all those bits onto the tissue paper blob…then add leaves punched from a clover shaped paper punch. Paint if interested. Repeat. 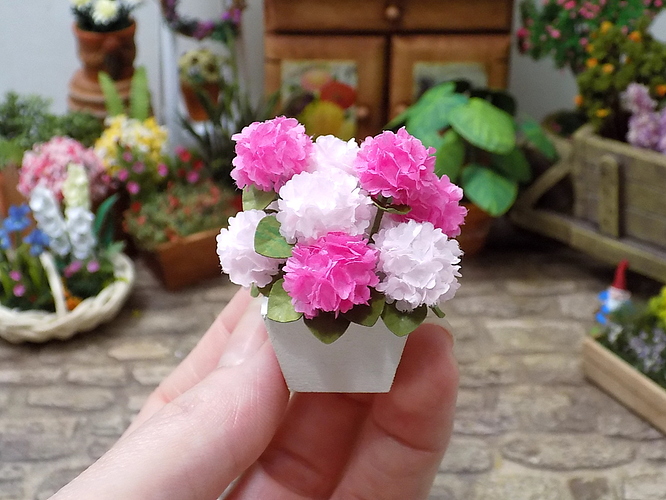 SCooper_Garden111600×1200 459 KB
The hydrangeas were made almost the same way as the geraniums. I used a tiny ball of styrofoam on the end instead of tissue paper, and the tissue paper flowers were punched from a hydrangea shaped punch, and finally, the leaves are from a small heart punch. If anyone wants a short tute, I’d be happy to make a separate post. 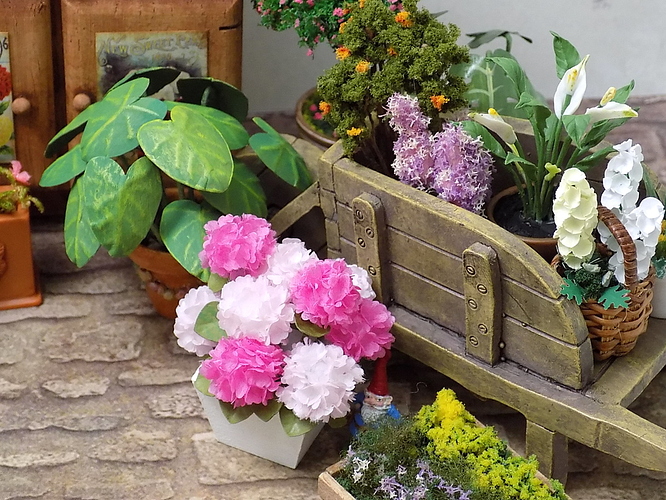 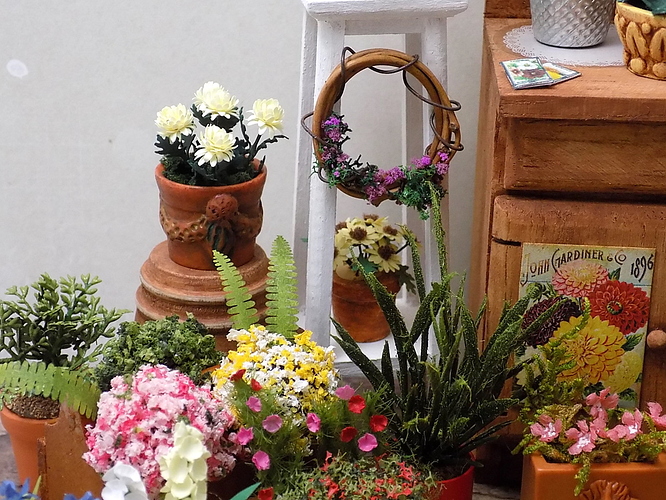 SCooper_Garden91600×1200 419 KB
It was nice having a teensy garden that didn’t rely on me keeping it alive, because normally all flowers die in my care. This time, however, the garden was killed by a giant garden troll. 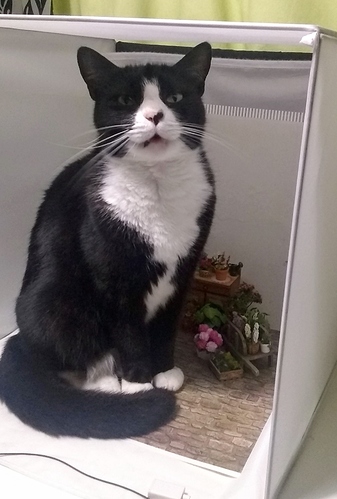 This is amazing. I can smell the flowers.

This is so awesome. I sent a link to your blog to my daughter, who just the other day mentioned wanting to make a miniature garden for her bookshelf. Thank you!

Wait - you made all this tiny flower petals? What? This is insanely awesome. I can’t wrap my head around it but I love it!!

It’s amazing and you made it all! I’m such a fan of miniatures and these rank with some of the best I’ve ever seen.

That is one big garden troll. I have a couple of those myself.
I did spot the gnome, but only after going and looking for him.

Your flowers are amazing.
I love all the different containers, those help make it look real. Is that a thimble I spied in there?

Great floral display!
I recognize the amount of work that went into it.

Fun tip: use a blunt colored pencil to cup the flowers, and you get a two-tone blossom.

Your mini garden is absolutely amazing!
You’ve got some big tiny skills!
And big trolls in your garden…

Holy moly this is incredible!! Makes me happy to look at it! Wow!

I love this so hard.

Mind blown!!! I do not have this kind of patience! Wowie zowie!!

You have the green thumb!

and insight of any indoor gardener! So very realistic!

This is simply admirable! What a delicate work! Awesome! I would neither have the patience nor the dexterity to create something like that!

is the fern from a punch? Are there fern-leaf punches out there that I’ve somehow missed knowing about??

There is so much detail!! How long did this take you? I have to agree with other commenters that I wouldn’t have the patience for this. I feel like one plant would take me at least 4 hours. Wow! This really is amazing!!