@storerboughtcreation reached out to me to see if I would be willing to make some special charms for the Nerd Games. Originally I was a little hesitant because I didn’t want to take away from the ebay sale, but then I came up with this idea that is Nerd Games specific: 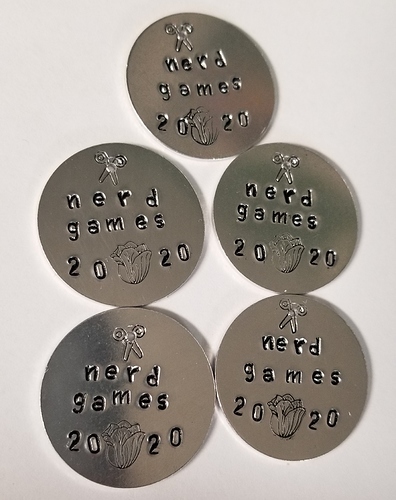 She asked me to make 25 charms. I punched holes in the charms that did not already have holes and added the round clip thingies (drawing a black on real word, but that is much cooler, right?)

I put them all in a fancy bag to send off: 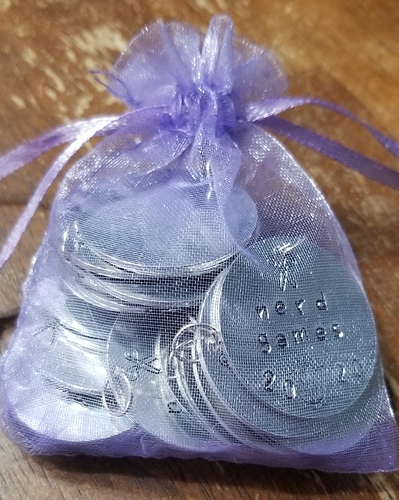 I hope it made her feel like she was holding a bag of gold! (or, er, aluminum rounds)

I also made her a set of 20 Nerd Games specific notecards (no picture).

And, the Nerd Games leader needed her own bracelet:

Oh my goodness, you’ve been busy!! I love the bag full of them — that is so fun!

I absolutely love my swap package! The bracelet…

Thank you so much!!! These will be sent out to anyone that participates in this first season of the Nerd Games in our new Lettuce Craft home. You seriously rock!

Oh, and the fastner thingies you added… I call those o-rings or jump rings. Not sure if that’s what they’re really called.

waitaminute. Are those little purple sparkles on the bracelet?!

Oh, yeah, I got a punch and a few of those for Christmas. They are super tiny and I am learning how to add them! 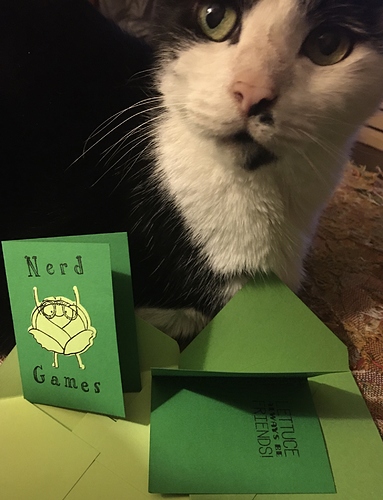 Here’s a pic of two of the cards you sent. Frankenstein was being a helpful card prop. If you want to use this pic to post for a prompt, by all means go ahead. Frankenstein would be honored to have his Royal Ickiness forced upon us all.

Ok, that is the cutest! What a helper!

Oh these are so awesome! They feel very personalized and definitely made with love!! We can show off our pride in the Nerd games!! XD

Wow! You sure know how to spoil someone! Those are all fantastic!

@Lynx2Lancer you are my metal stamping crush!! And you are taking this to a new level with this kind of spoilage…seriously, purple little gems? I am envious of the leader, but she certainly deserves it since purple is the color of royalty!!

I will be watching the games just to see the little charms awarded!!

These are so awesome! I love them. Do I spy little nerd glasses added to the Lettuce guy? Hahaha! Too cute! Those charms are fantastic!

Just post a project in the games and you can get one yourself!

How cool, and I’m sure quite appreciated

I hope it made her feel like she was holding a bag of gold! (or, er, aluminum rounds)

What an excellent gift. Good on you, Lynx. I’m sure they are truly appreciated. Wowzah! Above and beyond!

Fun! You are a stamping master!

Love the swag! You’ve been on a roll with the metal punching! The notecards are adorable too!

It’s been fun and even more exciting since there has been so much excitement about it.

I will be watching the games just to see the little charms awarded!!

We’d love it if you joined in! You can be as active as you like… we just love oohing and aahing over projects, and being supportive of each other. If you have questions about posting, don’t hesitate to send me a PM and I’ll walk you through it