I have a small collection of faux weapons that I have repainted/modified to be a bit more realistic and oftentimes, more… well, gross. When I found this barbed wire-wrapped baseball bat at a thrift store for just $2.49, I had to have it. 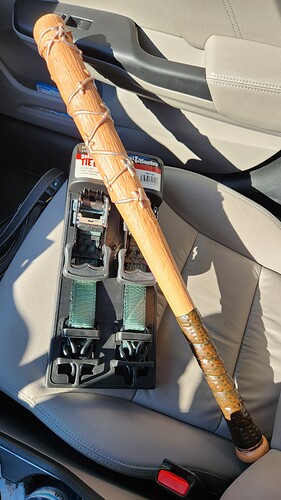 There are layers of primer, paint, glazes, and heavy bodied medium. 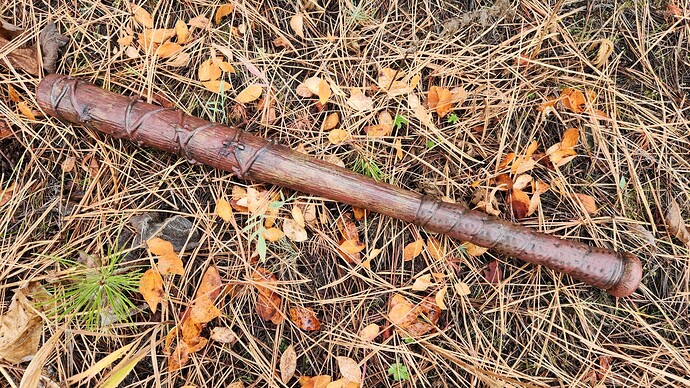 Also, some fake hair. Made from some now-vintage “animal whiskers” from my stash. I only wish I had more than one color of them. 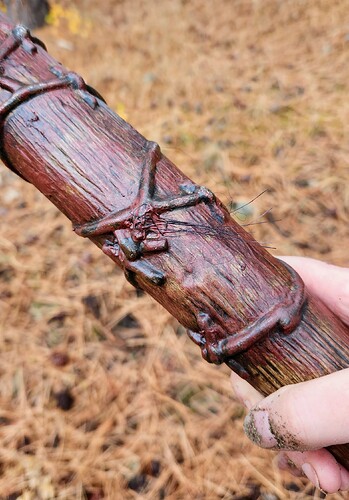 The heavy bodied medium and hair came in handy covering the “made in china” on the end. 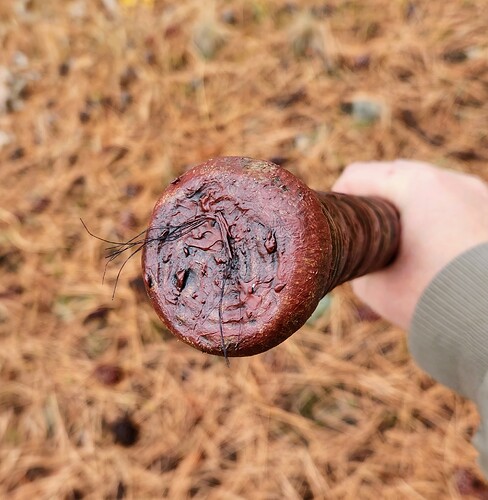 Most of my other faux weapons have built-in loops for hanging, but of course, the bat did not. I considered some kind of wrist loop, but then remembered that I had a wooden rack thing that came with a bunch of lumber and scraps I received from a neighbor earlier this year and that it might be a great little rack for a fake baseball bat! (no before pic) 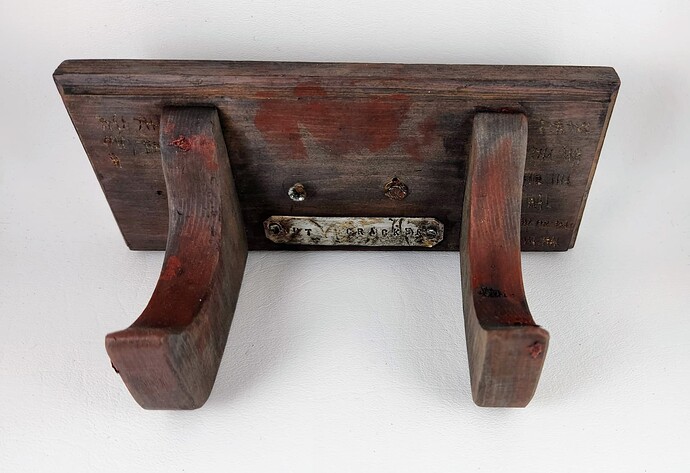 I gave it the ol’ paint and glaze treatment to distress and gory it up. 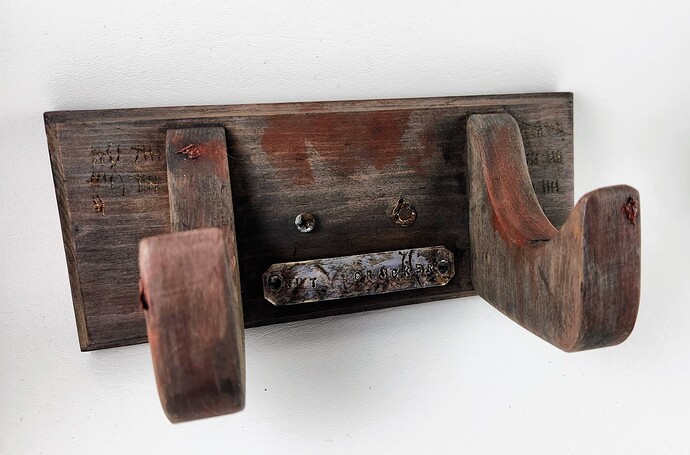 I used the dried up bits of paint from one of my paint lids to make chunkier bits of zombie flesh. I also added tick marks to show how many zombies have the Nut Cracker had removed the heads or destroyed the brains of. 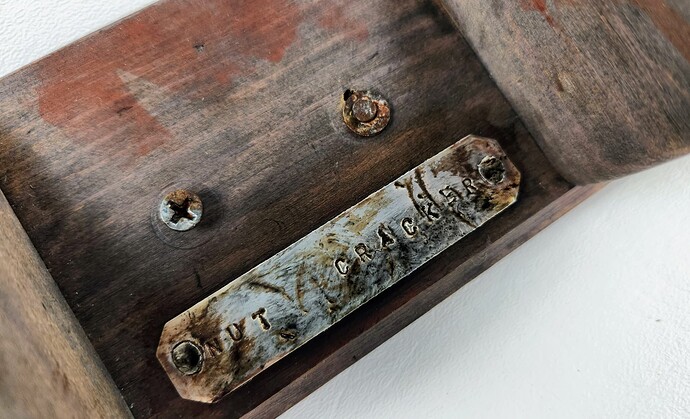 I used my Sizzix to cut a soda can into a plaque, then punches to give the weapon a name, inspired by names given to swords in Lord of the Rings and Game of Thrones. I looked up slang for “head” and decided “Nut Cracker” would be the funniest! It could double for a classic testes shot, too. 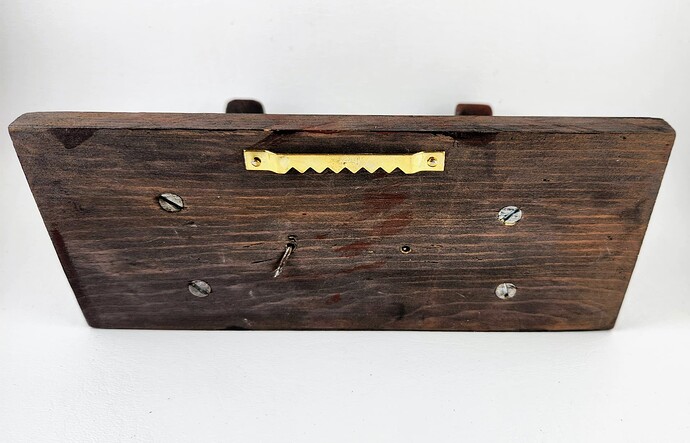 The hardware on the front is purely ornamental and from the stash of rusty/distressed hardware I have been saving. I used a piece of frame hardware from stash to hang it with. 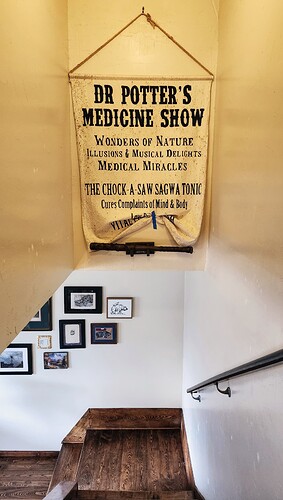 For now, it’s hanging in the stairwell, at the ready should we need to wake up in the night to defend our home against undead intruders we can grab it as we run downstairs. I didn’t get the other weapons out this year when I decorated. I have a whole remodel/redecorate plan for the stairwell, that I hope will come to pass next spring and maybe this will become a permanent fixture.

OMG, you weirdo. I love it

Hahaha…so many awesome details. I love the name and the zombie tick marks.

What a detailed and well thought out gross-on-purpose thing you’ve got there!
In all things it is your attention to detail, and simply the details that you come up with, that really make your creations stand out. The way you use stash to accomplish wild and unique effects… you are truly a craftsperson.

Maybe you should take up a career doing movie props. This is amazing!

I keep thinking of poor Glenn…

Thanks so much, everyone!

… you are truly a craftsperson.

You have made me blush sitting next to Delia here on my sofa.

I keep thinking of poor Glenn…

Well, do I feel dumb… I don’t know who Glenn is!

This is so bloody brilliant! In every sense of the word!

I see what you did there. THANK YOU!

Glenn = Walking Dead.
It looks like you have such fun house décor!

Well, that explains it. I only saw the first 2-3 episodes of TWD back when it first came out.

removed the heads or destroyed the brains

This is my nod to a piece of zombie media, Shawn of the Dead.

The hair…OMG (I mean that in a good way).

lol Glenn was a favorite character in the Walking Dead who was killed by a very bad guy with such a bat…it caught fans off guard and I couldn’t watch for weeks after that—I was so traumatized!

Thanks! After I added hair to a plastic flail a couple years ago, I just had to add it to this!

I totally thought that this was where is was headed… (haha) but Shaun of the Dead is also a good zombie reference!

lol I had a very hard time watching the Brit show Shetland because I kept seeing Neegan…lol…how many years ago did THAT episode of TWD air? See? I am still traumatized! lol

I love this so much! You are my kind of weird!!