Old desk remade and spruced up

This was a cheap desk that my kids had that was in bad shape. So my daughter in law wanted me to repair it and make it smaller for my son’s birthday, so I did. 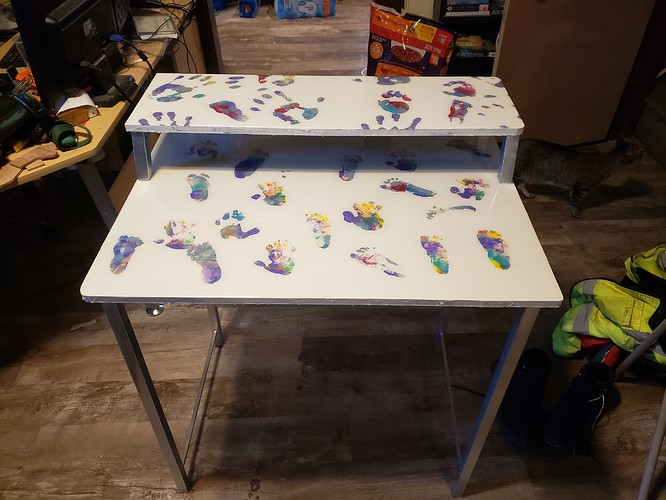 The middle leg, I cut off one of the bars and used some allthread I had laying around for the brace between the two legs.

The top, we had used their 6 month old to paint his footies and handies onto the top, then I covered the whole thing in resin. I used the pour method, and unfortunately, just couldn’t get the sides. Meh, it still looks cool.

Unfortunately, I’m in just too much pain to finish the drips, so will either have to do that later, or just leave it. Don’t know until he can start using it (needs one more day to sit for some of the touch ups to finish curing).

Anyway, it looks like my crafting days are coming to an end. I’ll make a post on that soon as I have a new Chronic Ed comic drawn up.

This is adorable and I am sure it will be well loved and used by your son and his family! I’m so sorry to hear you’re in such pain and I hope you will find a creative outlet that you can do and love.

Fun upcycle! I know they will get a lot of use out of it!

It’s a great idea, I’m sure your son will love it with the hand- and footprints on it.

I hope you’ll be able to find a way to make your pain more manageable, or that you can find a craft that will not cause you so much pain. It’s so difficult to go without a creative outlet.

I love that you used the foot and handprints. It makes it so personal and I am sure it will be cherished for years to come. Best of luck with the pain management. I hope you find an outlet for your creativity. You are very talented.