I am making a buncha stuff to put in a “cookie tin sampler” for xmas mostly for my dog-walking clients but also my family-in-law. It’s going to have not just cookies but also poppycock and a few slices of this fruitcake. 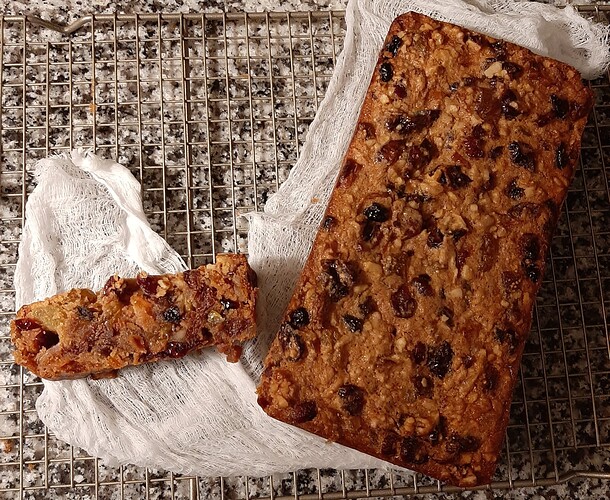 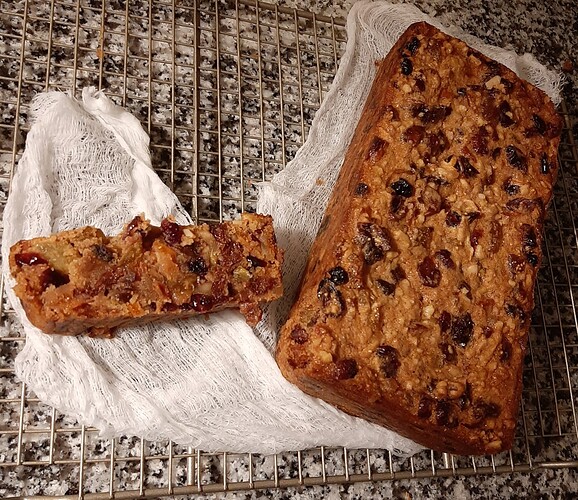 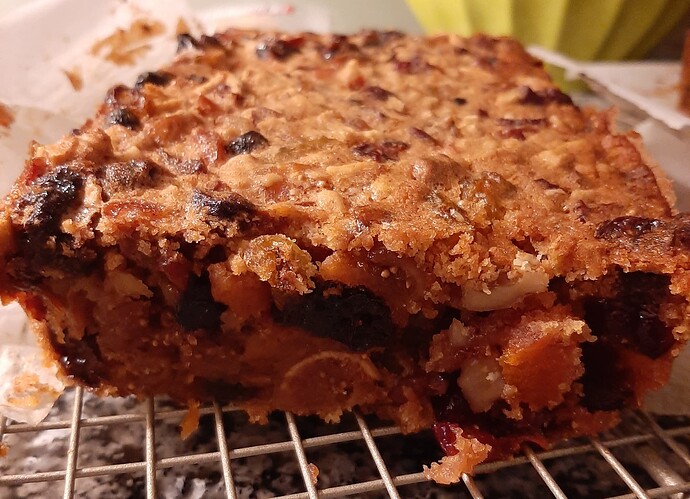 This is the link for the recipe I used: 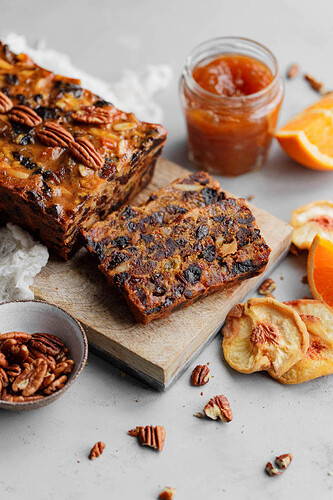 This recipe calls for no unnatural-looking sugar-laden fruit. I got about a thousand pounds of dried fruit from Trader Joe’s, then soaked it in dark rum for over 24 hours. Dried fruit includes figs, golden raisins, cherries, blueberries, apricots, and prunes.

This recipe calls for more eggs than I thought would work for flax as a substitute. I am vegan so I used “Just Egg” which is a vegan egg substitute which is QUITE good. So if you’re trying to cut down on cholesterol or allergic definitely try it out. It worked really good in the recipe which I was a bit worried about!!

Once the cake is all cooled off you soak some cheesecloth in tripplesec and wrap them up in it. Then you wanna keep it soaking for a week as it’s more delicious sitting for awhile. I tried a slice right away though and it’s delicious. It’s only got a total of 3/4 cup sugar split between the two loaves.

It was super fun making an old-fashioned recipe like this!

Update: I added waaaay more rum cuz I figured it wasn’t touching all the fruit at once. I probably should have just left it as-is because I had like one-and-a-half pieces of cake and when I went to bed I may have been a teeny bit tipsy. Oops!

I’m also not supposed to have hardly any alcohol since my stomach doesn’t deal with it too well as of late. I guess I’m gonna need to be careful about eating this cake!

Hmmm… May have to try this recipe. DH loves fruit cake! I’ve never been a fan, but I do love fruit and this recipe looks interesting and swears to convert non-fans like me. Thanks for sharing it!

BTW, I love “Just Egg” and always use it when I want a breakfast scramble.

Wow! I don’t think I’ve ever had a proper fruitcake like this. I think I’d have a totally different perspective of it with all that booze!

Don’t forget about the Great Lettuce Craft Bakeoff! You might have something else up your sleeve for it, but just in case you don’t, this would be an awesome entry!

I’ve been intrigued about making a fruitcake lately and now you’ve gotten me REALLY intrigued!

Oh yes this is totally my entry. I just couldn’t find the post for it because I was looking in the “contests” part of the “crafty shenanigans” thread. Now that I found it again I’ll for sure enter!

Awesome! Yeah, this one is a category contest, so it’s under Food and Drink. Site-wide contests will be posted in Shenanigans.

We do keep a list of current contests here for reference. It’s accessible from the “Craft Challenges” button at the top of the page!

Don’t forget to post a link in the contest thread to your entry.

I’ve never at least had an old-fashioned one. I don’t quite remember the fruit cake I had that one time but my uncle Tony brought it so I assume it was better than most. Lol. I really think fruitcake just has a bad rap because people used to give it to eachother so much for Christmas that people would end up p with like 8 fruitcakes and get stuck of them. Lol!

oh man, I have never seen a fruitcake with blueberries. oh I am definitely going to be dreaming of that tonight.

You should try it!

Time to Vote in the Green Holiday “Greens” Challenge!

Thank you to everyone who participated in our challenge!! It’s time to VOTE!! poll

And this year’s Bake Off!

Thank you all for participating in our challenge!! It’s time to VOTE!! poll