I always just used a sharpie on my flat head pins. I did not know there was an actual thing either

I have the writeable flat ones as well…Obviously anything works and people like doing it the way they have been doing it…I am one of those that likes to try all the new gadgets and gizmos…which is why I probably have a bunch of old tablets, computers and phones in boxes…and tv’s…I am FB’s favorite customer…lol…I buy all the things they put in my feed…lol

Hey Quilty Friends! I’m thinking of proposing a Quilt Block Swap for the upcoming round 6 swaps. I’m thinking about the requirements, and wondering what you all might like to see.

Would you like to swap with just 1 partner, making them a few of their requested blocks? Or in a small group of 3-5, so you’d be crafting for multiple people, and you’d receive blocks back from all of them?

What do you think of the requirement that you make & post an example of the block you’re asking for, so partners can get a sense of the style you’re going for? (This would be to hopefully help avoid getting back blocks that don’t fit in with the quilt you’re trying to make.)

Would you guys like to pick just 1 block to have partners make? Or would you like to pick 2-3, of various difficulty levels, so people can craft the one they are comfortable making?

How much crafting time would you like? (Especially in relation to crafting for one person, or a small group.)

I want to know all your thoughts!

I like having a choice of blocks to make for a person. I also like a small group of 3-5.

For mailing purposes, especially if there is an international partner, it makes sense to include whatever the weight limit might be…for example, sometimes it costs the same price within a range…if you send one, it could cost the same as three…but that fourth one will send you over the top!

I have done one block folded into the card and managed to send it without customs or excessive postage.

I have done one block folded into the card and managed to send it without customs or excessive postage.

Hmmm… I wonder if cost wise, it would be worth it to send 4 blocks for the same person, in 4 different notecards, with just a stamp, rather than 4 blocks in one package.

Actually, it takes a second ounce stamp as well since it doesn’t meet the machineable criteria of being perfectly flat, so 70 cents per ounce…I recall that a block weighs 2 oz, so it would be another 20 cents, total of 90 $3.60 for 4 blocks. The 8 oz small parcel rate is $2.47. At least that is what I have been doing…

When you do four separate envelopes, you have to round up…when it is one, the blocks don’t quite weigh 2 oz…like 1.18 oz…so 5 oz…or 6 with a card and maybe 8 if you include a ziplock…lol…yeah, I have time on my hands…lol

You do postage math. I search out honey producers in other states. We all have our thing.

lol yeah, thanks for that! Jim is making Korean BBQ tonight using some of the local honey…I am also going to check out Lowes since a variety might help me with staving off the dreaded allergies…knock on wood, so far, it is just sniffles…I think the rainy weather has kept the pollen at bay for a bit…

A-I could/should dip my toes back into swapping. And a block swap is right in my wheelhouse.
Previous ones I think were groups of 4, and you made 3 per person if I recall? So you’d end up with 12 12" blocks.(if you made your 3😉)
I’m open to selecting 2 blocks to choose from.Easy and not so easy.I just don’t want any one to go to fandom in stitches paper piecing again.That round was brutal. (but I am open to paper piecing. I love it.)

And cost won’t factor to me.It’s likely all international and will likely run 5-7 bucks a package anyway.

And this is my afternoon. My entire basement floor. I’m a 1/4 done and so sad that we aren’t going to bars right now. Caus ei deserve a pint after this one is done. 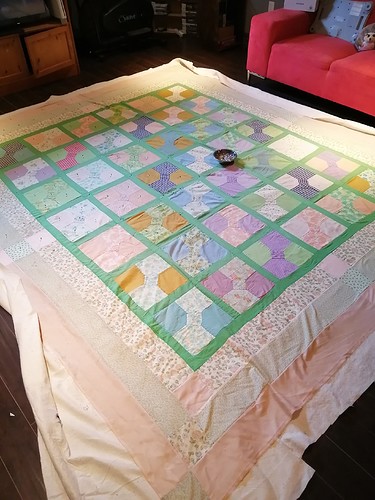 I think I’m going to be really busy this next round of swapping, so not sure I’d be able to fit in a quilt block swap. That said, I think having a requirement to make ahead a preview of the block you want is a bit much, but maybe finding a link or some examples might be nice. I also think it would be nice to list several block choices so if you hopefully aren’t partnered with someone listing something you don’t feel comfortable making. Seeing as I feel like I’ll be busy, I’m more inclined to vote for 1 partner, but that’s just based on my life commitments.

I know @audiobooklover and I have thrown the idea to each other of doing a quilt swap within this quiltalong, so if it does not get picked in the general swap vote, we can talk here about doing an unofficial swap here.

Ok, the Quilt Block Swap has been proposed. You can see it here:

I’m proposing 2 swaps. If they are both chosen, I will probably start signups for one, and once those signups are over, open signups for the second, just to space out all the questionnaire PMs. Name of Swap: Quilt Block Swap

Swap Organizer: MistressJennie Swap Requirements: Swappers will be grouped into small groups of 4 or 5 members, depending on number of people who sign up. Each swapper will craft 3 blocks for each member of their group. So if there are groups of 4, you would …

It’s hard to believe that today is the last day of March which means it is also your last day to get your quilt BOM submission for March in, as well as any of the quarterly prompts or challenges. We’ll be posting new ones before you know it!

I’m working tomorrow and Friday – we haven’t forgotten about our drawing… the winner will be in either tomorrow or Friday!

I was so close to finishing another quilt today, for the challenge theme. (This is one of the tops Edel sent me when we swapped earlier in the pandemic.) In fact, if my husband’s D&D game hadn’t been canceled tonight, I’d be stitching on the binding right now. As it stands the whole thing is quilted, and the binding is assembled and ready to go on. Guess I’ll just have to be satisfied with finishing it tomorrow. 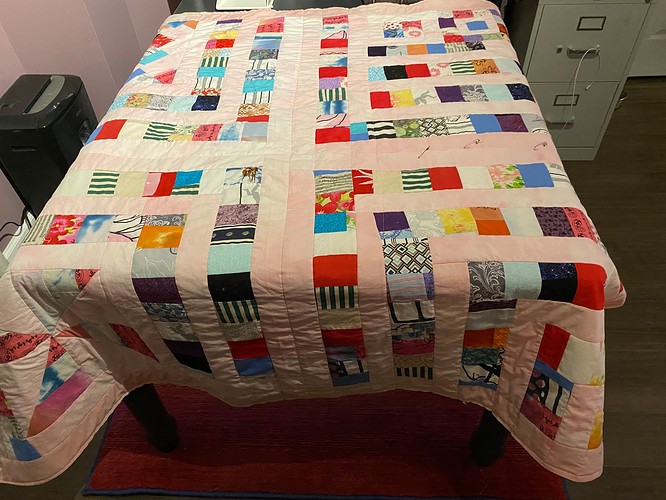 I love the idea of doing a quilt block swap! Unfortunately, I don’t think I’d be able to participate this time around, which is ironic because that is one type of swap I have really wanted to be a part of!

I’m excited for the drawing! I’ve loved seeing all the participation these past few months!

I MistressJennie submit this as my April BOM entry. 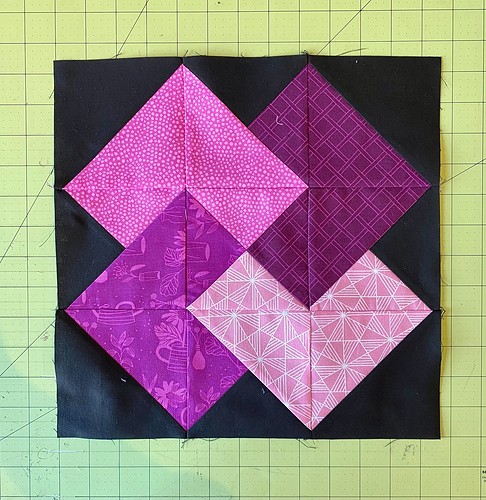 For those of you working on the Card Trick block from the first (original) link; Be careful! I messed my original block up because I wasn’t careful enough. I intended to have the two pink shades opposite one another, and the two violets opposite. In a quick glance at the diagram it looked like the Cards were lettered clockwise as A, B, C, D, so I mentally labeled my pinks A & C, and the violets B & D. But they aren’t actually that way on the diagram! They place them clockwise as A, B, D, C. So I ended up with pinks next to one another, and my violets likewise. Because all of these are cut as triangles, I didn’t want to take my pieces apart to fix the situation, because I’d end up with stretched out pieces after seam ripping.

This is my original block: 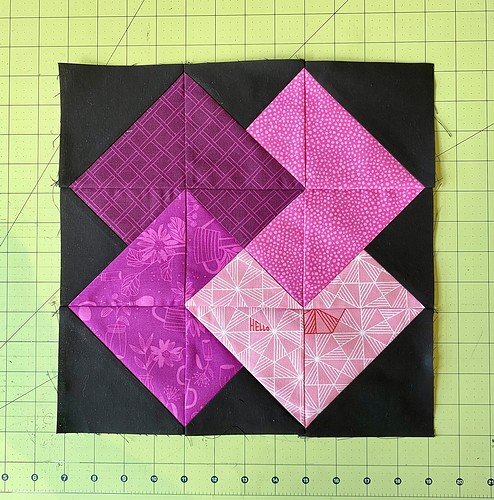 If you’re worried about making the same mistake, download and use the ‘Placement Page’ that it recommends in Step 1. Since the block cutting leaves you with some leftover pieces, I recut the ones I needed to make a second, and redid it. But this time I laid out my pieces in the order I wanted them, rather than following the written instructions. After having made the first one, and being sure I had laid out the second correctly, the second went together so much faster! 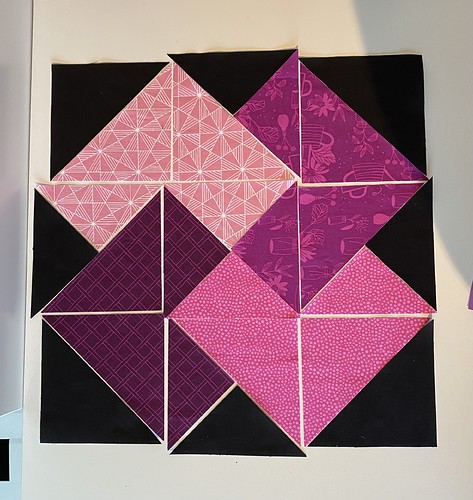 Second piece of advice: The directions have your pieces come out exactly the right size, if you’re using a 1/4" foot. There is no room for squaring or trimming the block down, and if you sew with more than 1/4" seam, even a tiny bit more, your block will come out smaller overall than you planned. Mine came out just under 12.5". If you like to square your HSTs, or are worried about ending up with a too small block, then you might want to cut your pieces 1/4"-1/2" larger than written, and then trim them down after piecing them. When I pieced my second one, I just adjusted my needle position by 1 click, and that fixed the size problem for me.

Here are my two blocks side by side. The original is on the left, and the second one with the placement I intended is on the right. 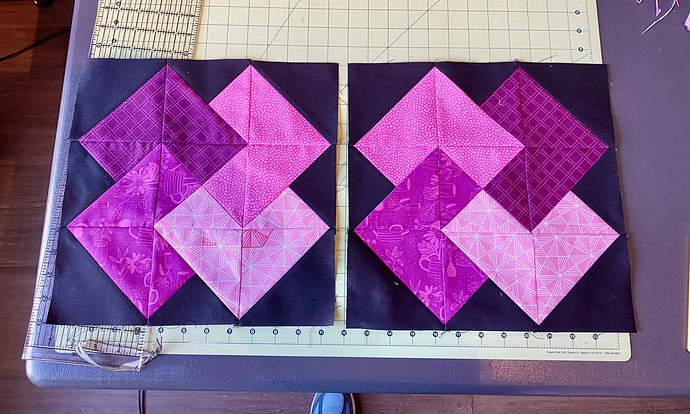 So much helpful information, thank you! I will definitely be following all your advice when I go to make my block. 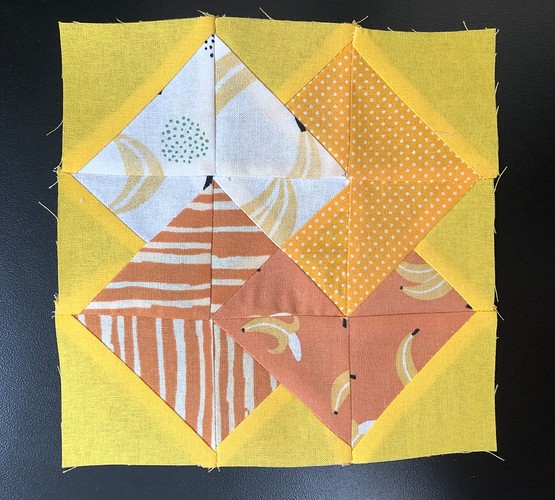 Thanks to @MistressJennie, I successfully placed my 2 banana fabric diagonal to each other!

BUT! I completely messed up my QSTs, even with the handy chart. I think I sewed the wrong side (for 3, not all 4 at least), so my background and focus fabrics were swapped on the quarter triangle side (no clue if I’m using terminology right, ha!). I actually did bust out my seam ripper and went to town to fix the problem. Mostly because if I could still see where I did stitch wrongly, it helped me know where to stitch correctly.

And, I actually liked that the squares were the right size without the extra squaring up cutting, but then, I’m not overly concerned about size as I’m likely using this as a stand-alone square.

Thank you for the tips and your lovely BOM. I’ve been contemplating this block’s design possibilities.

I just missed submitting this block for the BOM, it’s been crazy here, and I did make this block when I had access to my sewing machine, which I don’t have right now. 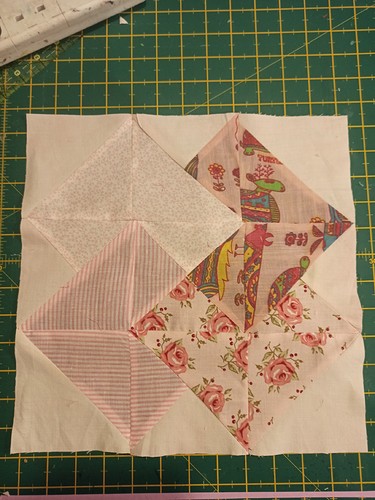