Since I realized I could make pillow covers instead of a bunch of pillows, I am on a kick of having seasonal and assorted throw pillows on our bed. 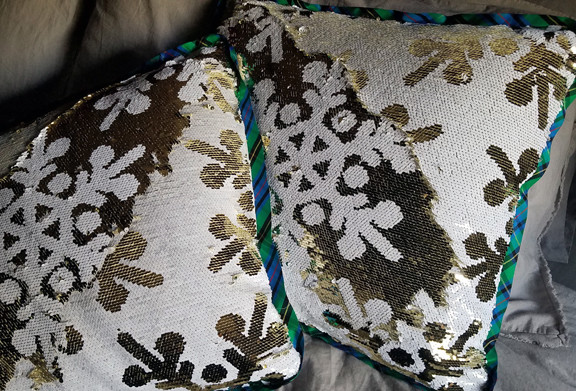 I realized I wasn’t getting inspired for a Christmas themed pillow and got the idea to do something sparkly for New Years and set off to browse the limited formal/wedding fabrics section. I found something very cool! Then I went to the super discount section and found this reversible sequin snowflake fabric for 70% off! 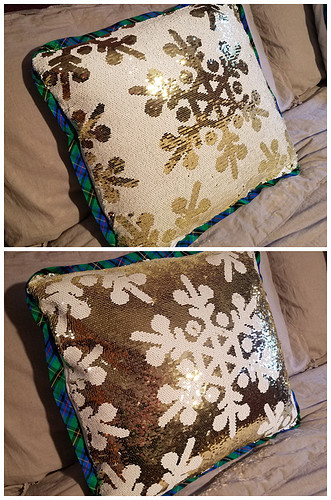 The scale was way too big for the 12"x16" pillow form I had intended to use, but “luckily” I have a small stash of feather pillow forms which included these 19"x21" forms! I also knew (by which I mean “hoped”) I would have something to use for backing, trimming, and fastening in my stash. Luckily (again), I did! A probably-polyester taffeta-esque plaid given by a non-sewing friend who’d been given it years ago, a probably-polyester mid-weight white woven left over from a quickie costume (not shown), and a couple white zippers given to me by AIMR (also not shown). 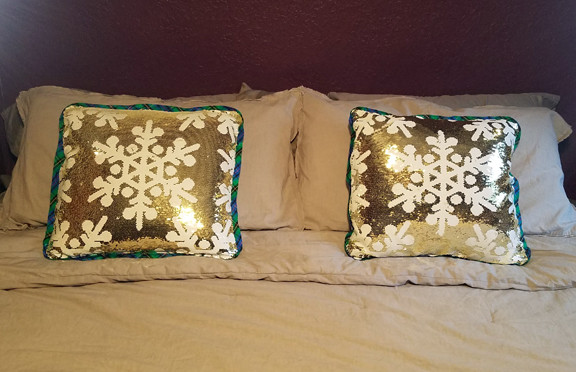 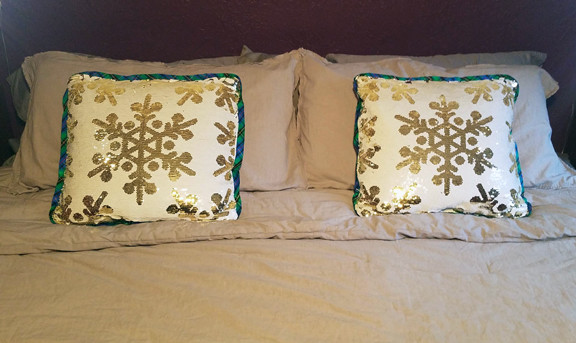 As I was in the process of picking out the cursed sequins along the stitch lines, a holiday gift from a friend arrived by mail and I was instructed to open it early so I could use it this year… 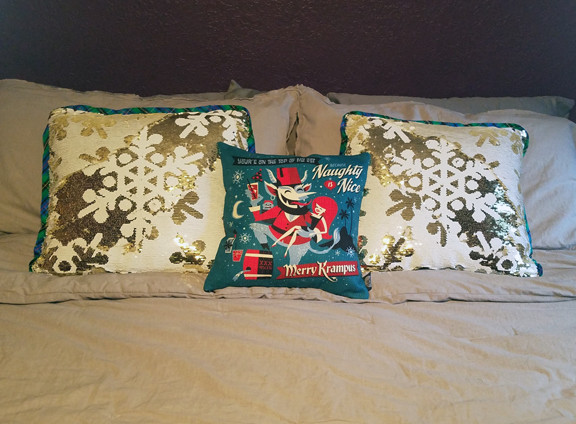 I worked out great! I will probably be keeping this snowflake pillows up through January since they aren’t specifically holiday-themed, more general winter-themed.

Those are gorgeous! What an awesome project that can be used throughout the winter.

Love them! I am sure the picking out of sequins in the seam allowance was a pain in the bum. I’ve had to use electric trimmers to ‘shave’ fun fur out of seam allowances when creating a costume for the Cheshire Cat, and it was a right royal pain too. But your efforts are so worth it! What a glam bedroom you have for the holidays!

Those are so neat! What a perfect winter pattern!!
You said that you found something very cool in the formal wedding section, then you went on to find the snowflake material. Did I miss the cool ‘formal’ material that you mentioned or is that perhaps something we’ll see in a future post?

I’ve had to use electric trimmers to ‘shave’ fun fur out of seam allowances when creating a costume for the Cheshire Cat, and it was a right royal pain too.

Oof! When I set out do do this I had intended on removing the sequins from the whole seam allowance and after about an inch was ready to consider quitting or taking my chances with sewing through the sequins. Then I realized that a little bulkiness at the seam wouldn’t really matter much on some pillows like it would on a garment and just removed one or two along the stitching line. Saved what’s left of my sanity!

Did I miss the cool ‘formal’ material that you mentioned or is that perhaps something we’ll see in a future post?

Ah ha! You caught my teaser! I haven’t yet made that pillow cover! Coming soon, to a forum near you! Hopefully.

That fabric is crazy cool. These came out so great!

You always make such classy stuff.

These are so fancy! Such an amazing job!

That’s so cool! I’ve seen a bunch of stuff made with that type of fabric around lately, but I never thought to look for the fabric itself.

Just love that you used stuff from friends…

These are great, love the wintery feel.