Richie with the ivory!

Last month it was our 14th anniversary, which has a gift of ivory. Of course there was no real ivory giving and he’s not a cute elephant type, so what was I to do?

Ivory, ivory, ivory… what about the white, off-white, ivory, bone and beige? What??? I can hear everyone say (except maaaaaybe @PrincessP). Prepare for a long explanation of the in-joke.

Richie Benaud was an Australian cricketer, the captain in fact. Much beloved. And my husband is cricket mad.

Richie then became a commentator. As the ‘captain’ of the commentary team, the network owner wanted him to stand out from the others in their navy sports jackets and wear a lighter colour. So he/the wardrobe team chose white. But each year the new jacket was made with different fabrics, so appeared slightly different in colour. See here

In the 80s and 90s there was a comedian who made a series of comedy tapes where he did impressions of the cricket commentary team and of course, Richie. One of the biggest gags in the whole series was Richie choosing which jacket he was going to wear that day. The white, the off-white, the ivory, the bone or the beige.

So I thought an ami of Richie with his ivory jacket (and pink shirt that he was also known for) would be a perfect ivory wedding anniversary gift. 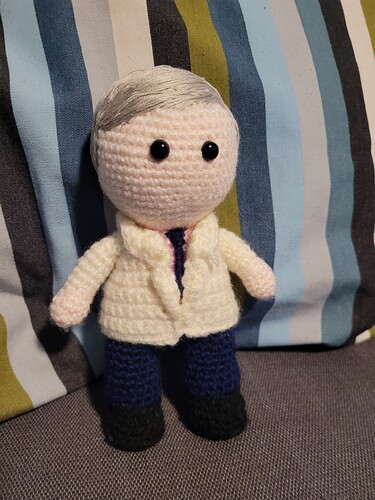 This is first time I have done hair with embroidery thread on an ami. It’s not perfect, but I’m happy, hubby is happy and he knew who it was and why I had made him for our anniversary. 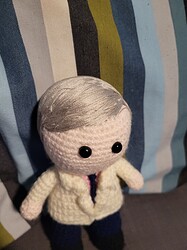 So cute! I think the hair turned out well, also.

Great story, too! I love it when crafts come with back stories!

Adorable! And I love how you played with the traditional gift theme to suit your partner. I like to do the same, twisting them to be more ‘us’. On our 14th, we went to the zoo to see the elephants. On our first (paper), I bought him a board game he wanted which had a paper (cardboard) board. This year was crystal, so I got him a set of quartz crystal dice for D&D.

Haha…what a great little play on a fun joke. Love that the Mr. got it and loved it!

What a great, clever way to make the anniversary tradition suit you! Richie turned out great!

What a clever way to personalize the traditional 14th anniversary gift! It’s especially great that he “got it”!

Is Don Cherry still around?

Oh wow. Not cool. The comments I mean.

Ooh, he turned out so cute! & what a funny story, haha!

Congratulations! Your little cricket player is a Featured Project!

Thankyou! I love that you found the cricket emoji!

This little guy is adorable and I adore the hair! So cool. It turned out amazing!