Hubby and I had a weekend away in May last year for our anniversary and I visited a local yarn shop and bought a lap rug pattern called Rockpool. My mum had just given me two large plastic canvas totes full of yarn from my gran’s stash, so to stop hubby having a conniption about taking on gran’s stash, I pulled a bunch of skeins of 12 Ply (bulky) that went well together and got started. (I was quite happy with the colour combination, considering the stash would be from no later than the 90s.)

I ran out of some colours

so had to go and search for similar-enough colours and hope the differing yarn sizes didn’t matter too much.

I also had to buy yarn to make the squares around the circles, as the colour that I had planned to use (gran had about 6 skeins) just wasn’t quite right. 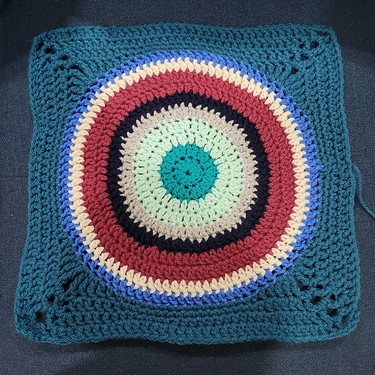 I used two different colours for the squares as I unfortunately didn’t have enough of the teal (which I love) as it was a mill end bag and there was only one. But it worked out that I had enough for the border squares, so a different colour wouldn’t look completely out of place. 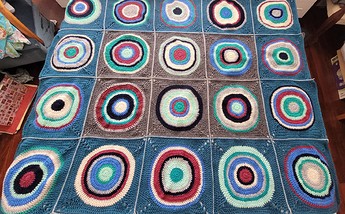 Then all that was left was to add the border, which was five rows of double crochet (UK)(single crochet US) and then one row of crab stitch (which I had never done, so new stitch to the library!) 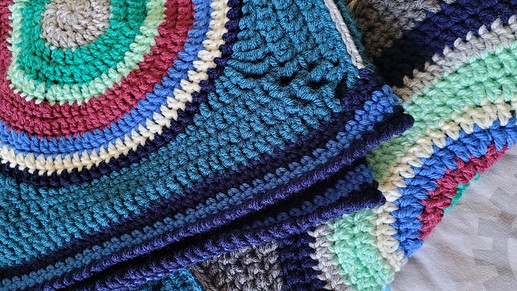 I wanted to make sure that I used the yarn evenly and made all the circles unique, so I spent ages on a pattern to mix the colours up. It was like a massive game of sudoku, with only a certain number of each size circle in each colour. 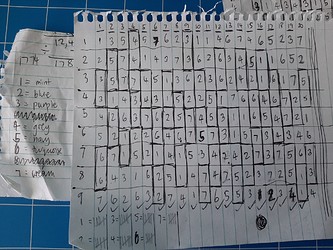 Here it is, in all its glory. Using 12ply ended up making it bigger than the pattern, it’s about 4’×5’. So quite big and heavy. I think I ended up using nine skeins of stash yarn. 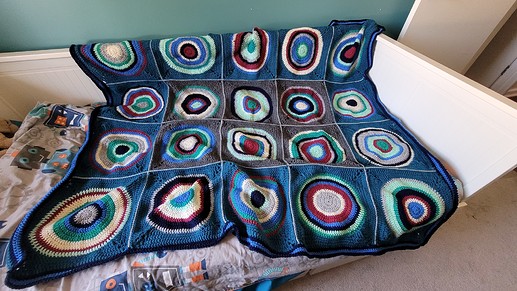 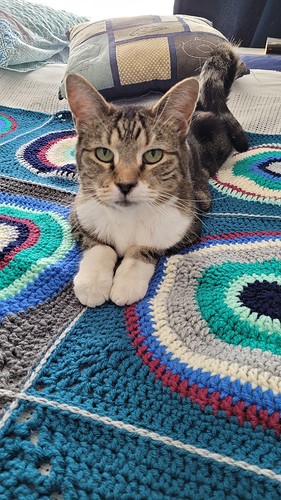 How wonderful! I love the pattern you chose. Bet your grandma would be so pleased her yarn went to such good use.

I love this, you did a great job on choosing colors & placement!

Gorgeous, I love the colors!

This is a blanket kind of rug, not a carpet, right?

Yes it’s a blanket. I forget how many different words mean different things!

Oh, good. I didn’t want anybody walking on it.

It turned out so awesome, great job!

First off, it’s just so attractive with the circles and squares and the color combinations. Second, it really flatters the kitties coloring! And third, I just love the story of your grandmother’s stash and your finding just the right modern additions to make it into this finished project! YEY!

It came out great! Perfect choices for colors and placements and I always give a standing ovation for that level of stash usage- vintage AND a large quantity! Brava!

Thanks everyone! I really enjoyed making this (even if it took me waaaay longer than anticipated) and I love the colour combo. It would have been easy to keep for myself, but I have given it to my MIL and she loved it.

WELL HERE ARE MORE PHOTOS! I am so in love with this! And now i can see your seeming is done in white! gah! there is so much to love about this!

i would never have included the red, and would have been so wrong. you have a great eye for color and harmony. and all your effort produced and excellent finished object!