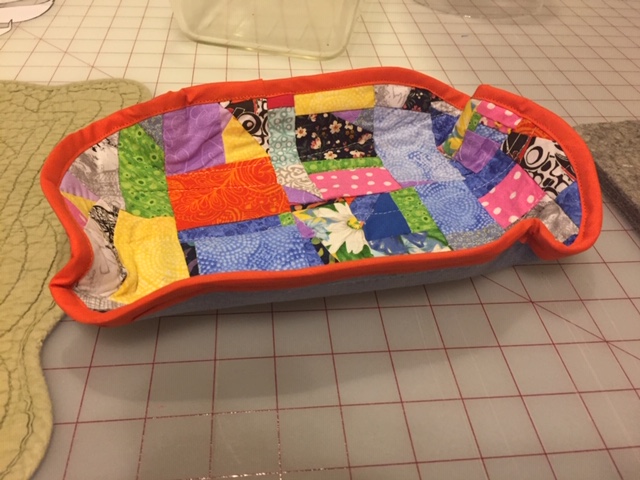 Not long ago, I came across a tutorial to make a tray using heat moldable interfacing. We couldn’t find the exact brand used in the tutorial, so we ordered a brand by Bosal. It comes in a fusible and non-fusible version. We used the non-fusible version.

We decided we didn’t want to make trays because a bowl would be more useful. The first thing we did (my mom, my aunt, and I) was to make a scrappy panel using a crumb quilt method… and it took way too long. We were hoping that we’d each get a scrappy panel, but we only ended up with one (so I got to claim it). We actually ran out of time on the day my aunt was visiting, so she didn’t get to make one 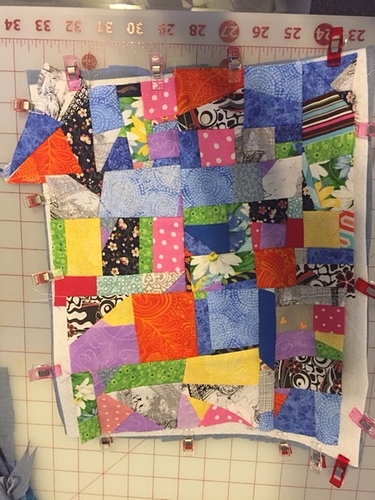 Next, because we didn’t have the fusible version, I quilted the scrappy top, the moldable layer, and the backing together using (rather sloppy) wavy lines. 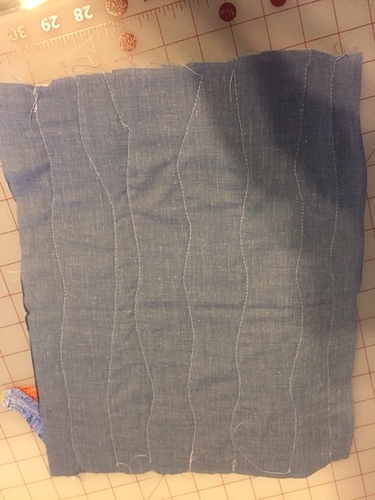 Then, using a water washable marker, I traced out an oval shape (I used a bowl, and traced it twice). 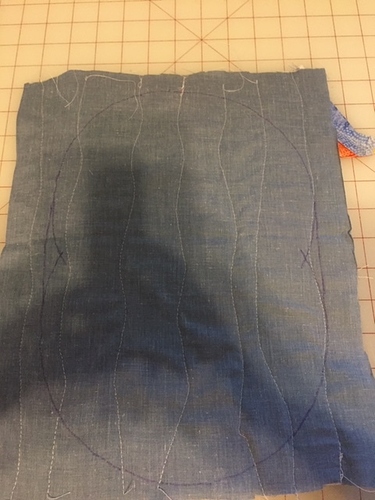 Then I cut out the 3 layers. 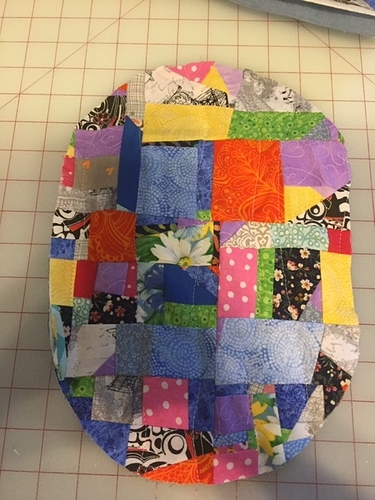 Next, I attached some binding… 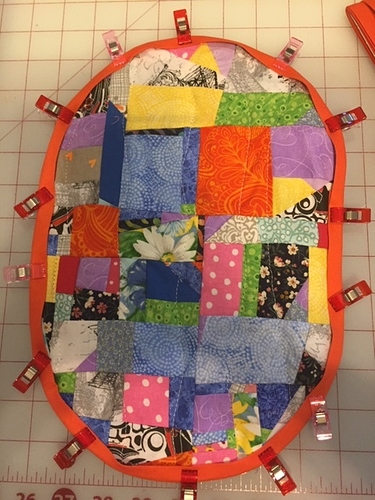 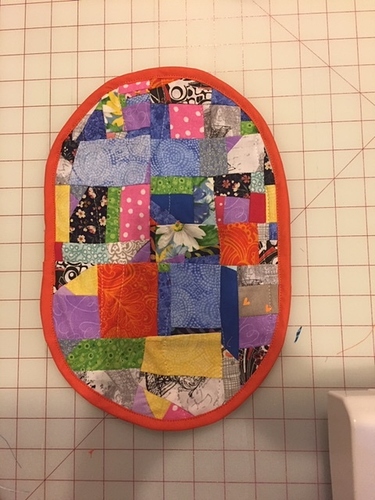 Then, to make it moldable, it has to be heated with an iron (some of the pictures are from my mom’s bowl because I forgot to take photos of some steps): 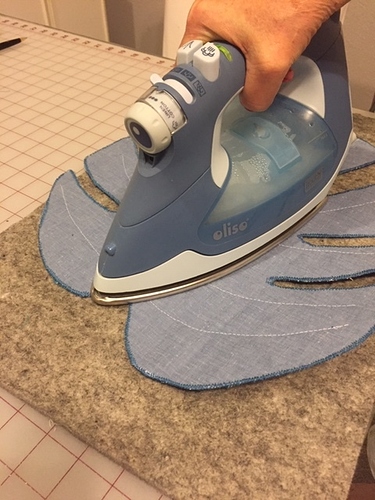 And then we used a baking dish to mold it. We could have flipped the dish over and molded it over the bottom of the dish, but this was easier to manage (it was hard to keep it from sliding off of the dish when we tried it that way). 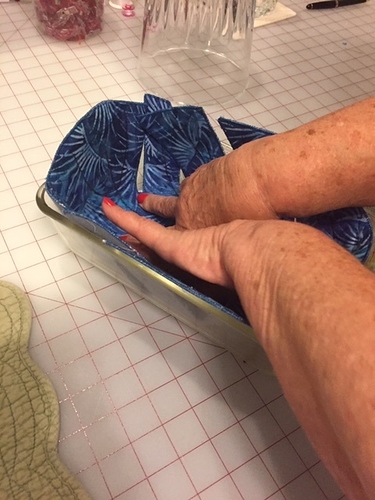 Then you have to let it cool so the moldable layer can harden. 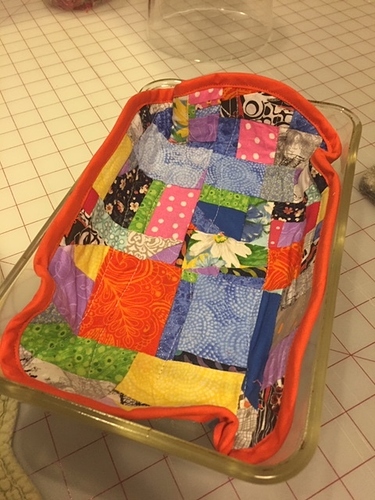 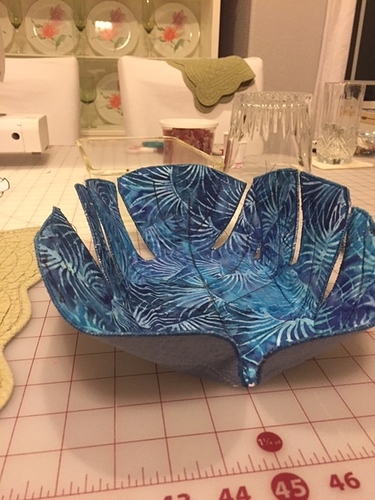 We were supposed to have lunch with my aunt the day after we finished making them, so I brought mine along to show her. Unfortunately, sitting in the car in the hot FL sun caused it to “unmold” so I’ll have to reshape it now that I’m home. I might use a loaf pan to mold it to make it a little deeper. I’ll add a photo once I do it.

It was a fun project, but I’ll have to think about what else I can use the moldable material for because I don’t know how many bowls I want to make!

This is such a fantastic idea! Thank you so much for sharing your tutorial.

So cool! Learned about a new product!

I could see using this to make a lot of 3-D appliques for prayer flags and other things! I have a poinsetta pattern that I might be able to adjust…thanks for sharing!

I love how you made a conventional bowl and your mom made that gorgeous leaf bowl!

Flowers done in 3D applique is such a good idea! You could really play around with the shape of the petals, too.

I’d never heard of moldable interfacing either. Thanks for sharing this cool project with us.

Yes, new to me as well! How fascinating! Thanks so much for your tips and tutorial.

I was admiring this again and forgot to mention that I loved how the crumb quilt came out! So much scrappy goodness indeed!

Thank you! I’m not sure if the reason the-scrappy part took so long was because my mom, my aunt, and I divided up the tasks- I stitched, my mom pressed, and my aunt trimmed. I think we were a little disorganized (and my mom and aunt kept getting distracted by other things

). But, it was neat to see it build, and even how the colors that I thought wouldn’t go together somehow all worked, in the end!

I have that moldable interfacing! Bought for that leaf project too. That I never ended up doing because whew, how thick is that stuff? Yours turned out great. Was it awful to sew through? Maybe I’ll give it a try. Thanks for sharing!

It wasn’t too bad to sew through, but it was stiff. My quilting lines were so messy because the moldable layer made it tricky to feed through the machine- it was hard to bend it to fit through on the right… if that makes any sense…

Love the scrappy quilt top - so much fun! How wonderful to know that this was a joint project too. Crafting with others is always a joy!

That leaf is to die for!! Gah!

Sorry to hear about the other relaxing back. I hope it can take another turn to reheat!!

Moldable interfacing?? Never heard of that, but how fun that it exists!

Thanks for sharing your project. I love how you did that with your aunt and mom,

Congrats on being picked as one of this week’s featured projects! You are AWE-SOME!

Thank you! You just made my day

Sorry to hear about the other relaxing back. I hope it can take another turn to reheat!!

It can be reheated, but I haven’t done it yet.I was thinking that I might try using my heat gun (I have one for heating embossing powder). And, I’ll probably wear hot mitts so I can mold the shape a little more.