Our backdoor mudroom has a lot of jobs to do, including all kinds of storage - almost entirely on open shelving. I’ve recently replaced some of the old plastic shelving with some slightly nicer looking metal pieces, but the contents of the shelves were almost entirely random and messy-looking. I just feel better when there is less going on visually - at least when it’s not decorative.

A few years back I was given A LOT of this camouflage canvas material that had been drapes for booths at trade shows, conventions, etc. While neither of our tastes run towards serious hunting/militarized looks, far be it from me to not use what I have on hand especially if it was free! Plus we can really beat to death dad jokes about “What shelf? I don’t see a shelf.” 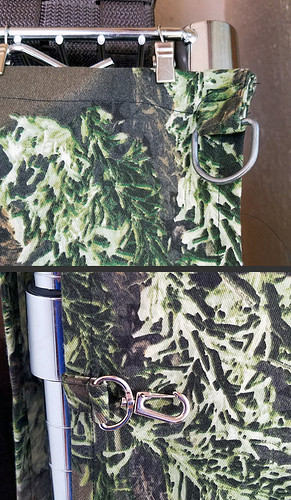 There’s a D-ring on the top right and a swivel clip on the left side about 30" from the top. 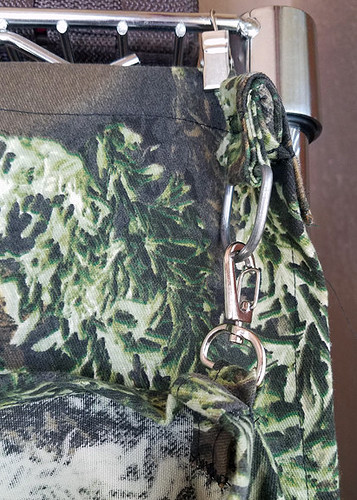 This holds the drape out of the way, allowing easy access to the messy items on the shelves. 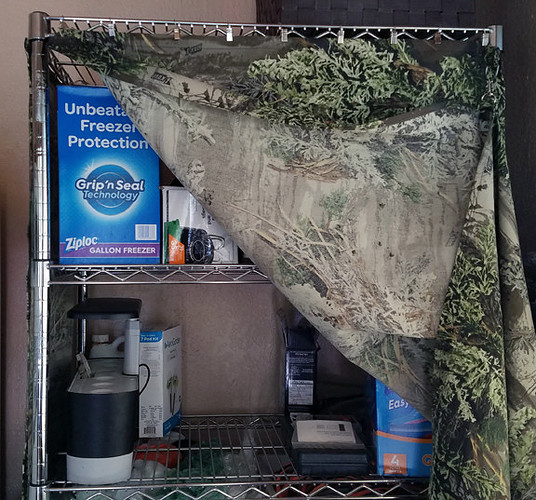 There’s also a panel on the outward facing side, even though there’s a refrigerator there, just to make it more cohesive. That side of the shelves has a towel hanger/handle from back when this provided extra space in a kitchen. Now it has a towel for drying off Delia if her fetching should happen to be rainy (or snowy). 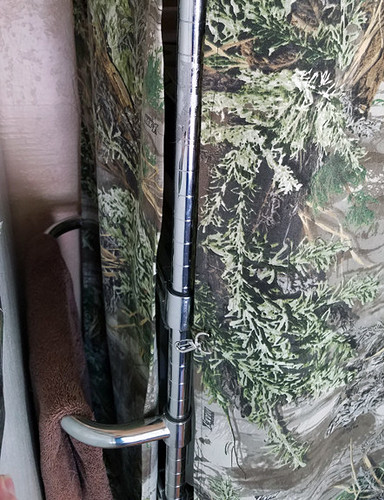 The panels are attached with these clips that I also had on hand. 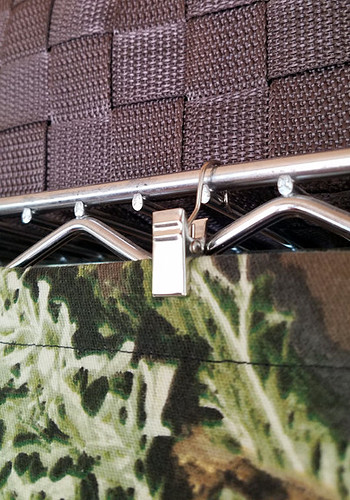 I decided so use the camouflage fabric to make covers for the woven bins we were already using in the mudroom, but on high shelves at the time. They’re now on the other metal shelf and hold things we might get at more frequently depending on the season. 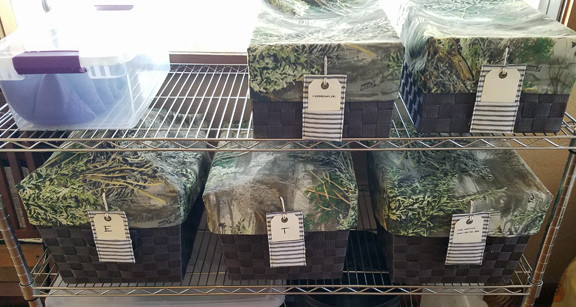 I made the tags for them, too, but they have their own post. 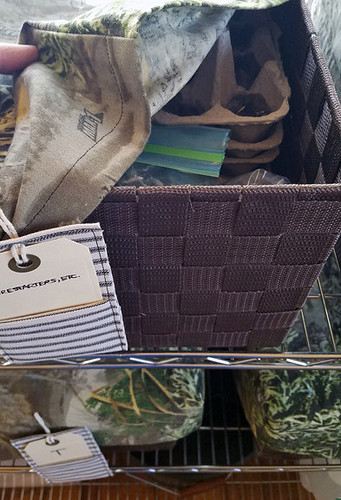 EVERYTHING for this one was from stash. YEY!

Clever! I love it. Especially those bin covers. What a great idea.

LOVE IT when you craft completely from stash! These are fantastic.

Very nice. I particularly love the tags. And the dad jokes.

If you’ve more of that fabric it would be interesting to see how it looks if you soak it in a strong bleach solution to see if it would lift some of the dye, you might get a cool faded look. If you do try, add an acid like vinegar to a final rinse to neutralise any remaining bleach.

Ok I’ll show myself out now…

After I mention that this is a seriously smart solution! I love the bin covers with the tags- never would have thought of that for sure!!

I think the bin covers are my favorite!!! Great job

Thanks everyone! I don’t LOVE the camo, but this is so, so much better than it was!

If you’ve more of that fabric it would be interesting to see how it looks if you soak it in a strong bleach solution to see if it would lift some of the dye, you might get a cool faded look.

This intrigues me! Hmmmmmm… I have a piece that has some holes in it; testing the bleach that might be a good way to utilize that section for something useful!

Wow thanks for posting this, I have 7 yards of this and I could only come up with stuff sacks , duffel bags and tool roll ups. I have some bins I can make covers for.

YEY! I had a hard time finding things to make with it other than the types of things you mentioned, too. And those are things we don’t need at the moment! I’m thinking about waxing some for a firewood cover if I ever get around to making a new wood rack for by the back door.

What a smart way to hide your stuffs!

The bin covers are definitely clever!