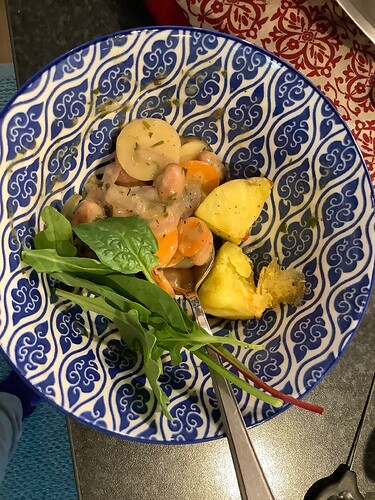 image1920×2560 713 KB
What do you think about my dinner last night? This is me having seconds, because it was very tasty! 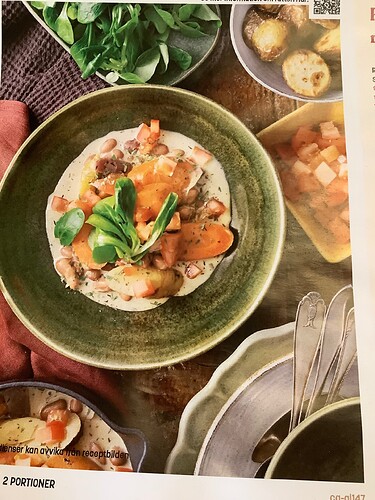 I thought I’d share my version. It’s vegan, and even the very much not vegan in the family enjoyed it. Despite the presence of oat ”cream” in it.

Roasted potato side dish
I used 4 medium sized potatoes, I was supposed to use 450g small potatoes in the recipe. Like potatoes? Roast more!
Vegetable oil of your choice (I’m partial to rapeseed oil)
Salt
Pepper

Start pre heating the oven. Cut the potatoes into chunks and toss in a bowl with a small glug of oil and the seasoning.
Roast in the oven on 200 ˚C or so until they’re done. I’d say 20-30 minutes depending on chunk size and oven.

Do not skip this step and try to put the potatoes in the stew, unless you hate flavour!

Cut the veggies for the stew. Peel and cut the onion into wedges. Anything smaller than that and it’ll just melt into the stew… Slice the parsnip and carrot, either straight across or on the bias for angled slices. Peel and slice the garlic. Clean the wax beans and cut in smaller pieces. I kept the peel on the root veggies for extra flavour and vitamins.

Drain and rinse the boxed/tinned beans, and then taste one. If they taste very bland, do yourself a favour and marinate them now. We accidentally used ones with no salt added. They were better today for lunch, but hadn’t absorbed much flavour from the stew yesterday.

Heat some vegetable oil in a casserole or large skillet and start frying the onion and veggies. Add them a bit at the time or you’ll just steam the veggies. Give them a few minutes head start before adding the garlic.

Remove the veggies and add a bit more oil. Crumble the stock cube into the pan and add the flour after letting the stock cube melt for a bit. Stir until the oil and flour is combined and the flour have started to cook. Add the veggies again, and then add water, ”cream”, mustard, red wine vinegar, and dried thyme.

Add a lid and let simmer until the root veggies are soft. Add the dried tarragon and the fresh wax beans and give them a few minutes of heat. Add the beans and then remove the pan from the heat. Taste and season with salt and pepper as needed.

While the stew simmers you can prepare the salad to go on top. Either just open a bag of the pre rinsed stuff, or cut a tomato in small cubes. Mix with a splash of olive oil, bit of whiite wine vinegar, salt, pepper, and some parsley if you have it. Or do both, I did.

Serve the stew with roasted potatoes and salad on top. 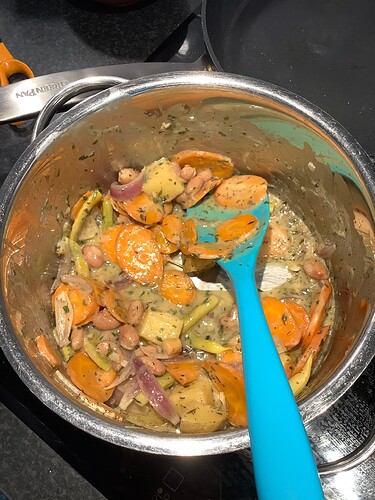 image1920×2560 523 KB
Yes, there are a few potato pieces in my stew. They did nothing to make the dish better. The roasted ones were much nicer!

If when I do this again I think I’d rather cut the parsnip into batons and roast them too. I like parsnip better roasted than boiled.

This was supposed to be 2 servings, but it lasted for dinner last night + two small packed lunches. I guess it depends on how hungry the people involved are. One of us have had bariatrivc surgery so…

This looks and sounds amazing!!

Yum! So much good stuff in here!