Nope, not Batman, just me! Another title chosen by Mr Loops when sending me the zip file full of photos to go through.

I don’t usually use paper patterns from big companies that much (just because I find the instructions more confusing than patterns from smaller independents!), but my fave fabric site was having a New Look pattern challenge in January (with prizes, weeeeee), so even though New Look aren’t size inclusive enough to fit me

I picked this lovely cape pattern (New Look 6535) as I’ve been wanting to make something similar for ages. 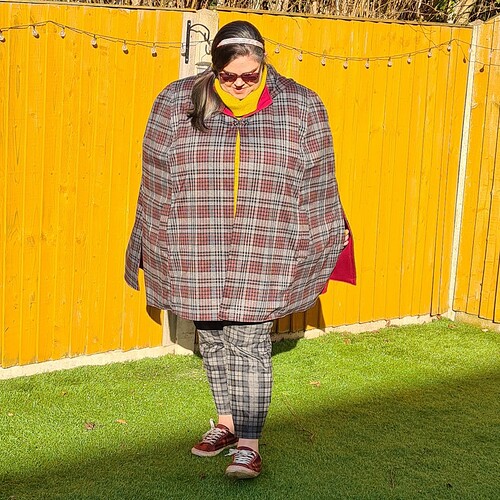 Downfall is that when I posted my challenge pictures on there I totally forgot to tag the pattern product, which was one of the rules. I only just spotted today, and you can’t edit posts on there, so I guess I won’t be winning any prizes, baaaaaaah!!! 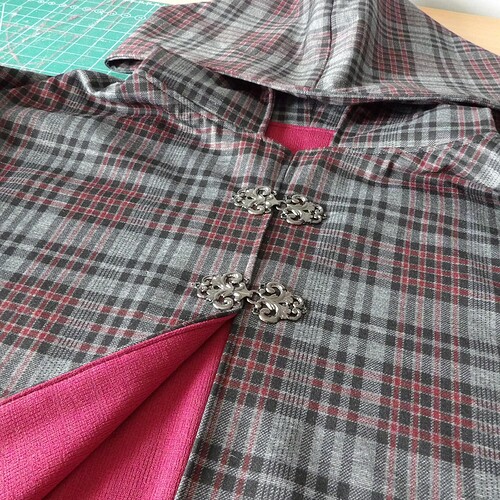 Soooo, I picked view A, which is the medium length cape with pockets, and hood (in reality I couldn’t really tell what the difference between them all was except the lengths and the clasps anyways…).

Aaaand then I got started grading up the pattern from the top size XL to a 3XL… which mainly consisted of me sticking scrap paper to the edges with the size grading, measuring 3 sizes down, and then marking that onto the edge on the scrap paper and cutting, and obviously moving the notches etc where needed, no idea if that’s how you’re supposed to grade up, but that’s what I did!! 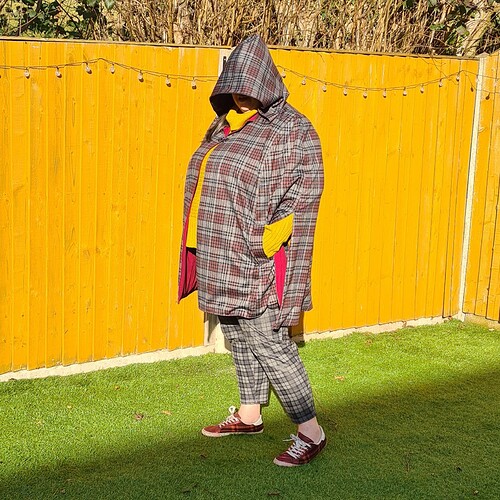 Anyway, that took me way longer than I expected, largely because I very much lack concentration and kept getting bored! So several days later I finally cut my fabrics (which took another day because I kept getting distracted again), and then wayhay I started sewing! And then the brain melts started, because the pattern didn’t have a lining, but I really wanted to have a nice lining on my cape. 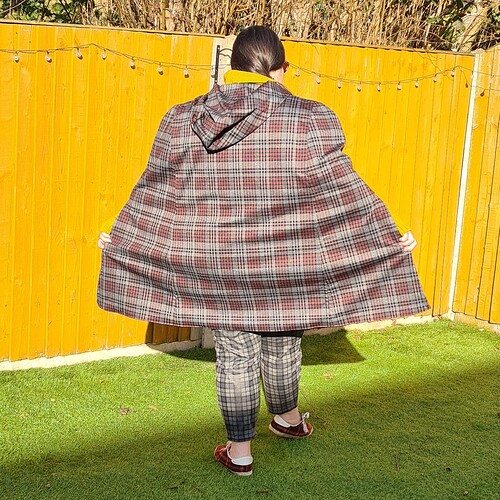 Yeah, I can see why they didn’t include a lining, I mean my brain probably made it harder than it was, but with the welt pockets and the arm slits it was a little bit more complicated to line, plus I had to make some amendments to my grading which mucked up my pattern matching… but still, I MADE IT WORK! 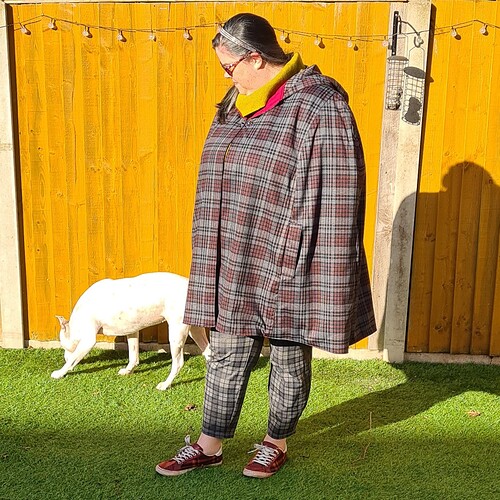 In hindsight perhaps it wasn’t the best idea to take photos of my plaid cape, whilst wearing plaid trousers and plaid shoes… but there we go, it does convey how much I like plaid tho I guess!!

Oh and if you’re interested, the outer fabric was Checkered Ponte Roma Fabric from Pound Fabrics (unlikely to still be on there mind as it’s been in my stash for a year and a half), and the lining was Textured knit wine fabric from Minerva. And I got the cloak clasps from Amazon in gun-black.

Great cape! Impressed with your pattern tweaking, too.

Wowee wow wow! This is awesome!

I may need a cape now…

As always, your sewing is impecable. Love the pop of color and the hardware is nice too.

This is a-maze-ing! All your efforts really paid off in a very nice piece of outerwear!

Will Rosy eventually have a coordinating outfit?

I really like the use of the contrasting bright pink lining and your clasps give the whole cape such an elegant feel!

@endymion Aww thanks, I think you can’t be too scared to tweak a pattern to make it perfect for you! I have quite a few patterns that started off from a particular pattern and has gone off on a complete tangent to make it just right for me

This one was a little more challenging than most tho

@Bunny1kenobi You know what, there’s nothing quite like a cape or a cloak! I have 2 cloaks I’ve made for myself in the past, a really long hooded cloak made with black wool with purple satin lining, and a short hooded cloak with the same outer and turquoise satin lining, both made for Halloween costumes but they’re so lovely I have worn them quite a few times since!! 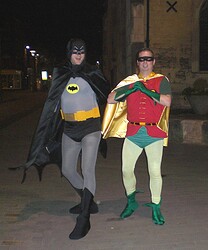 @gozer Aww thanking you so much

@TheMistressT Oooh good question, I just checked and whilst I don’t have a huge amount of the fabric left I think it might be doable! I bought a doggy coat paper pattern a while back on sale… might have to dig through the filing cabinet so I can make her something a bit different!

@AudiobookLover Thank you! I didn’t expect it to pop quite as much as it does in the photos, so that was a nice surprise and it makes me really glad I did put the effort in to line it

Please get a Sherlock Holmes hat for you and the pup and solve some crimes because that cape screams crime solving. It also screams SUPER CUTE!

She MUST have a coat!

@TheMistressT In progress!! Don’t have enough of the lining tho so will have to use black, but I’m sure she’ll look fabulous in it, and I’ll post piccies when finished of course

@kittykill Ooooh, now that’s tempting, I’ve started the pup’s matching cape, and I do still have soooome of the fabric left, we’ll have to see if there’s enough, lol!

YESSSSSS! When outfits coordinate, but don’t match exactly I always think of them as “Pointer Sisters” outfits. You are probably too not-American-alive-in-the-1970s-early80s to have any idea what that means, but trust me it falls into the Fabulous category!

@TheMistressT - Yes on the not American, I was born in the 70s tho but I wasn’t aware of that kinda music until more recently tbh, I wasn’t really into music until A-ha, Five Star and Wham in the mid-80s. That said I know now just what you mean!!

I just finished her cape though… here’s a sneak preview, gonna do her a t-shirt with the leftover fabric from my super crazy colourful joggers and then do them both in a doggy related post 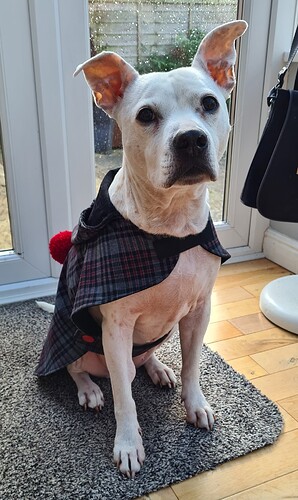 @kittykill - Cape done, unfortunately I literally used all the leftover fabric so not enough to make a Sherlock Holmes deerstalker tho!

THIS IS THE BEST THING IN THE HISTORY OF DOG CAPES SINCE FOREVER!!! I (freakin) CAN NOT WAIT for the full post with lots of poses and views!