Well here in the Forest of Dean in the UK we’ve just had 3 storms in the space of 5 days, Dudley, Eunice and Franklin, so after battening down the hatches outside what was I to do but make my pup Rosie the matching attire that she’s obviously been begging me for. 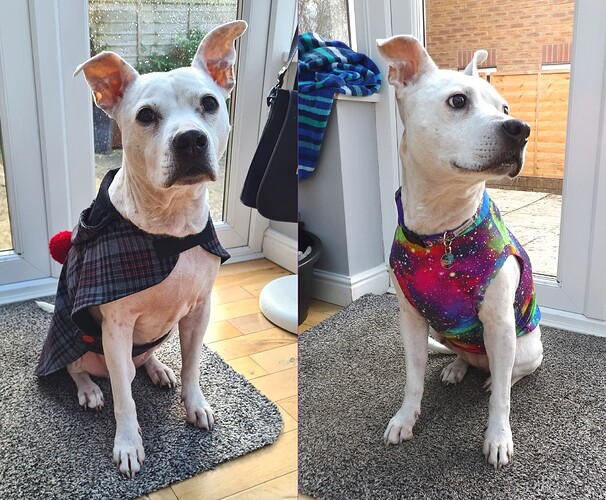 First up I made Rosie a lil cape coat to match my cape, using a Simplicity pattern (8277, view D, XL) I bought in a pattern sale a few years back. 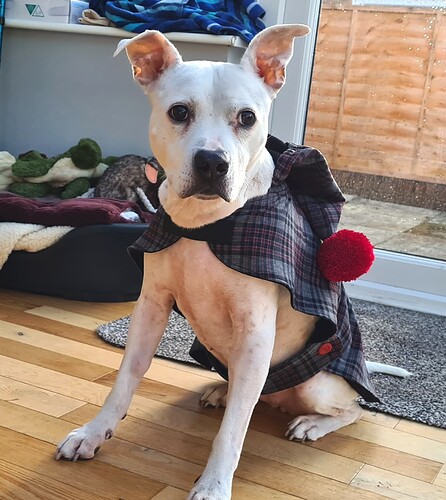 I ran out of the burgundy lining I used on my cape so I used a black lining on hers, but gave her some nice dark red wood buttons and a pom pom hood as an accent 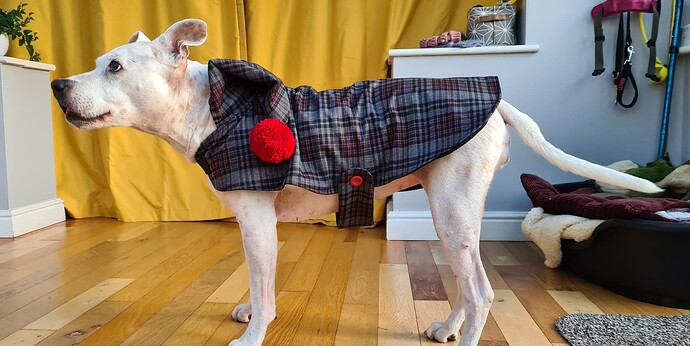 After trying it on the first time there was a fit issue, being a Staffie cross she’s pretty big in the neck and chest, and the neck was way too tight, so I unpicked the velcro and added some nice thick elastic there instead. Downfall is that now it lays better on her you can see that the waist band is much too lose, but rest assured I’ll be fixing that so that she can wear it out comfortably!!! 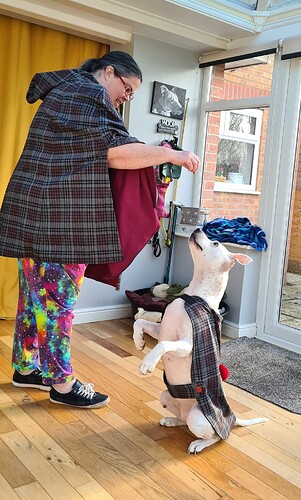 I’ve gotta say I think it looks better on her!!!

Next up, yesterday I finally got round to making Rosie a rainbow galaxy t-shirt (to match the joggers I’m actually wearing in the picture above!!) 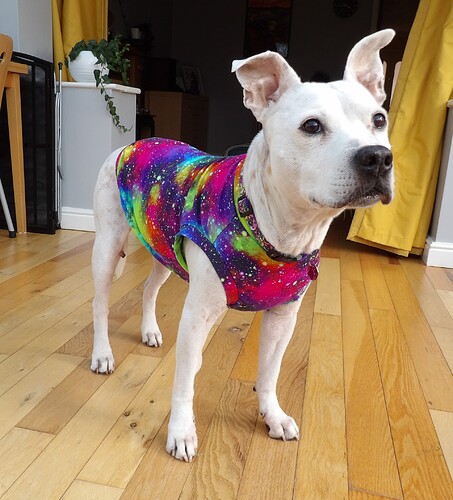 I used the free dog t-shirt pattern I usually use, with a few alterations on fit. And since I made her one of my rainbow collars recently I figured she had to wear that too, ALL the rainbows!! 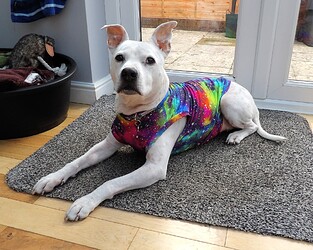 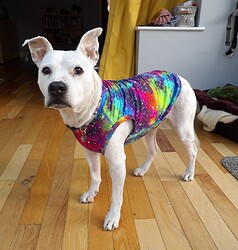 Aww she’s so cute, she gets really excited when it’s time for a new t-shirt, which is good cos she’s not quite as excited when she sees a camera even though she knows she’ll get a bunch of treats 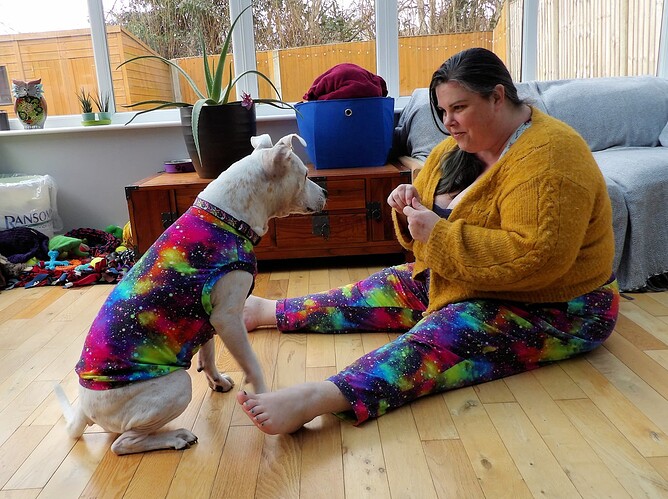 That’s it for now, but I’m currently making myself a new jumper, and I will of course be making her a matching one to keep her warm until spring arrives

P.S. nearly lost a finger during the photoshoot…danged dog-hter got a bit too excited about one of the treats!!

Awww… very sweet! And your dog-hter looks very cooperative to me!

Love all of it! Though the coat is especially charming.

Rosie is adorable and looks great in her new wardrobe!!

ROSIE IS SOOOOO CUTE! And especially in her mom-made outfits! ACK! And then y’all match? I just can’t with the cutiepiedness!

These are fabulous! She is SUCH a dashing superhero standing up in her cape!

I love this so much! She is so cute and you both look amazing in your matchy-matches. Rosie did an excellent job posing! She must be studying her momma’s moves.

Awesome wardrobe! I bet Rosie is the most fashionable pup in town

@endymion Aww she is a good gal, she gets a bit grumpy if I take too long and she doesn’t get those treats but she’s pretty good at holding her supermodel pose!

@Bunny1kenobi Her wardrobe will be larger than mine soon!

@TheMistressT She is just the cutest isn’t she

Mr Loops thinks I’ve gone a little crazy making her so many matching outfits, but seriously what else would I do with the remnants eh, I’m like saving the world or something…

@calluna Oh she’d love that, in her mind she’s defo superdog, or at least girlfriend of superdog!!

@gozer She is such a little poser, she doesn’t like it when I take pictures of her with my phone, she starts moaning straight away, but thankfully she’s much better with the camera!

Since she likes wearing them and also needs them to be warm enough… well, Mr Loops is full of nonsense!

Rosie is adorable! How wonderful you have such a cute dog-hter to make clothes for. The t-shirt fit is perfect for her. Oh and a matching cape! I can’t gush enough about your projects and model, great work. Thanks for posting the t-shirt link, I’m bookmarking it for future use.

Squeee! She is so cute. Our Staffie cross loves clothes, too. I need to learn to sew him some, since he doesn’t fit the “off the rack” clothes very well. And, there’s the whole boy dog issues on the tummy area of ready made dog clothes.

@TheMistressT Oh absolutely, I mean she’s getting on in years now as she’s around 11 so she gets even more cold these days. Plus she’s clearly very fashion conscious, yesterday she was already wearing her new grey cable jumper (soon to be posted…) and she brought her rainbow galaxy t-shirt to us as she wanted to switch it up

@lady4feet Aww thank you so much, she is adorable (and she knows how to work her adorable-ness to get treats I can tell you!!). Hope to see your future doggy t-shirts too!

@J-squared D’ya know I’ve never had a boy dog so I hadn’t even thought about the issues there! And yeah I know what you mean, staffie bodies aren’t quite the same as a lot of other dogs with their chunky necks and chests, that’s why I had to alter the pattern a few times with her initial t-shirt to get a good fit!

@Loop-da-Loop and @J-squared You two are so lucky! Delia (below) doesn’t really like clothes, excepting “coats” so if we can’t trick her into thinking it’s a coat or a collar, she looks like the saddest, most put-upon pup in the whole world.

Our last three pups have all been male. I’ve learned how to make quick modifications to create a clear space in the abdomen area. No matter how snug you think the clothes are, a little piece of them will always be in the way when the pup takes a tinkle.