I crocheted this flag because I wanted to show my respect and support for our police officers. When completed, I sent it to my local police station. I call this flag a “Mourning Flag” because if you take a look at the 2nd photo you will see that one red stripe has been replaced by an unusual stripe - a black one bordered by a thinner blue one above and below it. That “thin blue line” is symbolic of fellow officers standing reverently beside the brother and sister officers that they lost in the line of duty, and so “mourning.” 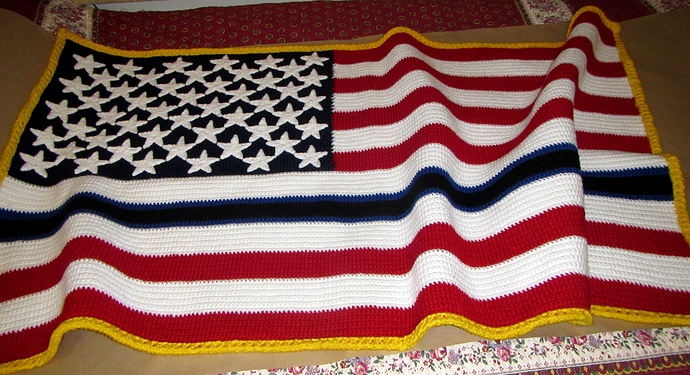 This picture shows the “first” batch of stars I did (but didn’t use - too big). The crocheted stars are in the plastic bag, that’s what they look like right after being crocheted…all curled up! To make sure the stars were shaped better, I drew, then cut out 50 stars using my good card stock. The idea was to hot glue each card stock star to the backs of my crocheted stars. Just a mere dot of glue at the 5 points to hold their shapes, later to be sewed on. Of course, I had to crochet another 50 stars and cut out another batch out of card stock. That’s 100 stars I had to make. Worth it, tho! The flag took 9 days to make!! 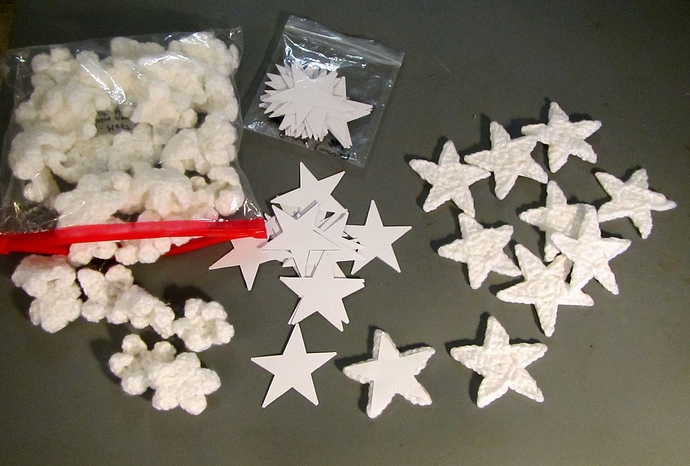 There are various versions of this flag on the web, but all show a single blue stripe, which is fine, but I just thought my way to be…well, my way! You know me, by now… I gotta touch things! And as far as I know this flag has no name. Again, I chose to just call it “The Mourning Flag” because it sounds
appropriate. Just my take and hope it doesn’t offend.

Just to add:
Below is the first flag I made about 15 years ago. My sister took it before my hook could cool! 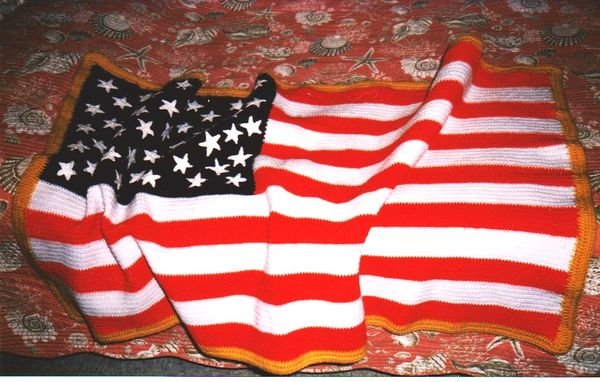 I thought to add the pattern in case anyone else might like to make one. Just be warned…your family will want one!! It truly does work up fast! 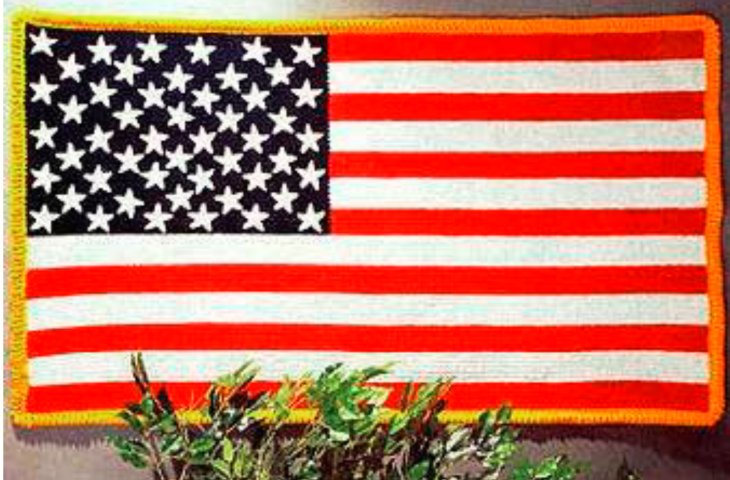 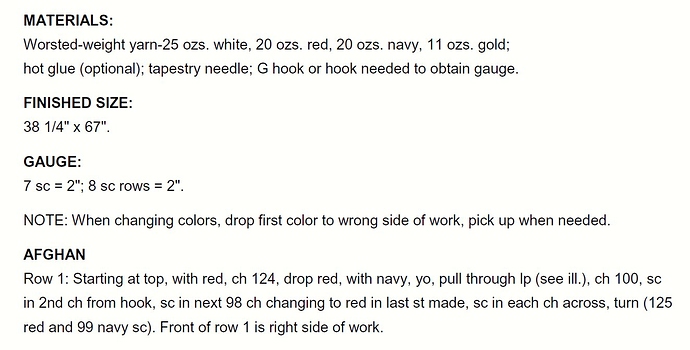 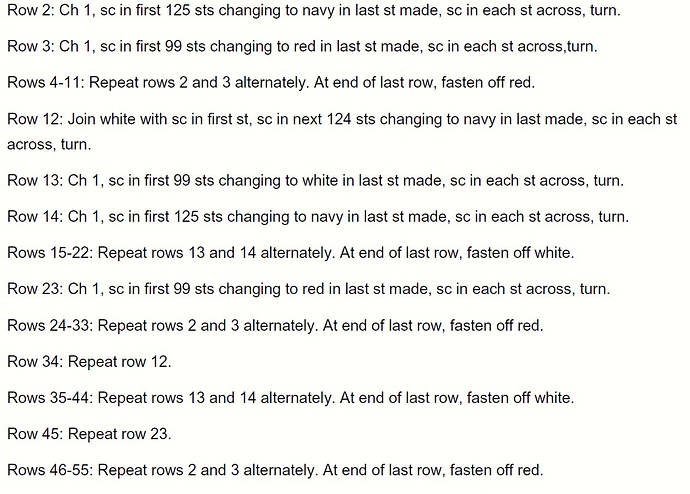 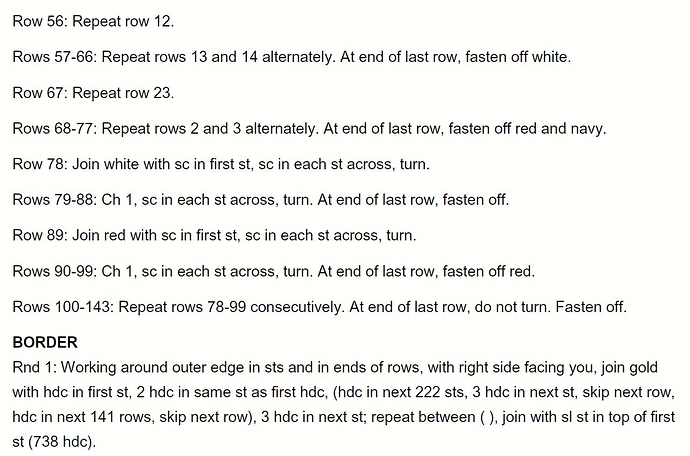 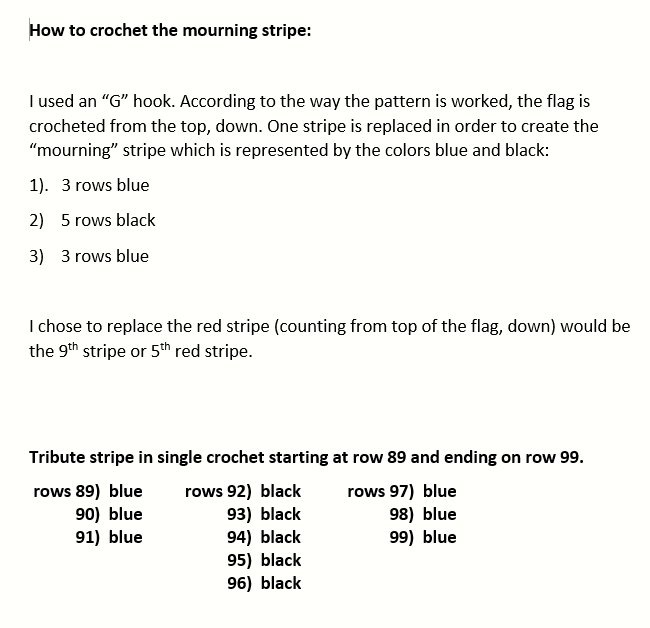 Wow, what a lot of thought, empathy, and work! Nice job!

Wow! What a huge undertaking… You must crochet really quickly, like my grandmother used to do. I’m such a slowpoke, I’d probably never finish one flag that size, let alone two! I’m impressed.

So beautiful and thoughtful.

Thanks so much, really appreciate it!

Yes, I do crochet fast, not crazy fast but fast enuff. These flags, btw, crochet up very fast anyway because they are made using only the one stitch - single crochet. And once you make a couple of stripes you sorta learn how the stripes are made and then you start making them without looking at the pattern. Plus the instructions are easy peasy. Thank you!!

So glad you like it AND appreciate the thought.

Beautifully done and so thoughtful.

And backing the stars to keep them pointed is a great idea!

Yes, thank you!! I didn’t back up the set of stars that I made for the first flag I made. And it took me almost 9 maybe 10 days, alone, just to sew the stars on that flag. That was because of all the many additional little stitches I had to hand-sew all around every star while at the same time, re-shaping it. When the time came that I decided to make the Mourning Flag, I had already told myself I will not do that again!! Instead, I whipped out my trusty glue gun and hot glued all the stars, on! I whole heartily recommend you do the same. Using the glue gun took me LESS than an hour to do them, ALL! No contest!

That’s so involved, and thoughtful. I bet the recipients really treasure it x

Just something I learned over the many, many years I have been “playing” within things of a creative nature, and that is that the amount of heart and determination (AND stubbornness) a person has at the outset, can water down ANY intricacy. Notice that the first of these I said is “heart.” If your heart isn’t in it. You’re already licked! I think I am one of those lucky crazies that was born with a way-too-big heart and an epic size curiosity because I prefer to take on things that are beyond me, that make me have to reach. That makes every endeavor I undertake seem like a birthday gift waiting to be unwrapped.