The return of Leisure Suit Loopy

Blimey, it’s been a bit of a while!! I have been quietly lurking, but I haven’t sewed anything but dog collars recently (which is my actual tiny business) until now, Xmas holidays = time for making more lounge wear!!!

I picked up this brown and white knit fabric up for a sweeeeeeeet £1 per metre, not my usual brightly coloured or all black (cos I’m weird like that) but I thought it would be great for some snuggly pjs, or just lounging around the house 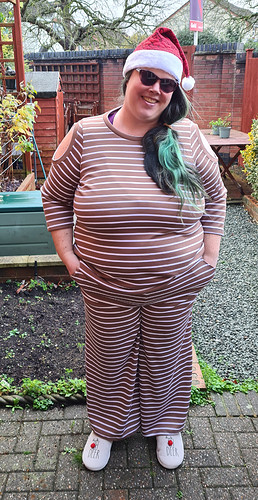 Since I often have really warm arms and shoulders in bed I figured a cold shoulder top would be perfect, albeit apparently my shoulders aren’t that wide as it came out more cold upper arms than cold shoulders, but I still really like the look. 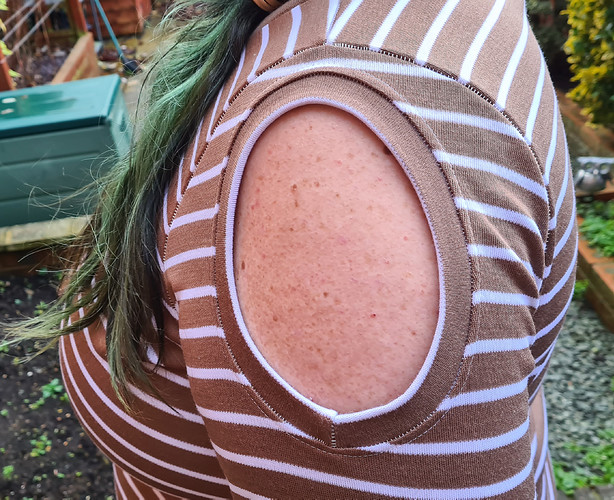 NOTE: I made the trousers with my sewing machine, but the top with my overlocker/serger, and looking at the close up above I really need to play with the dial tensions on my overlocker!

Now, I also get really hot hips in bed, but thankfully for you cold hips trousers isn’t a thing (even though it techically wouldn’t be difficult to achieve

) so I just made some nice wide leg bottoms, but with pockets… obviously! 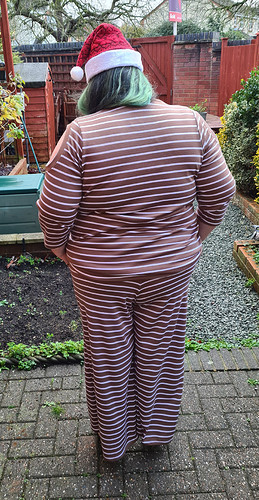 I will say, it may have been a daft idea to do the photos outside, cos even though it’s quite mild here at the moment I was still frozen, rofl. 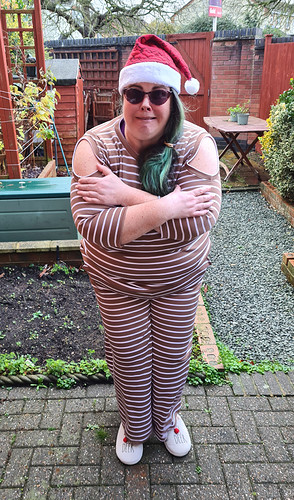 Fabric used:
Brown and white knit from Pound Fabrics, alas it already isn’t in stock anymore cos they sell out super quickly unsurprisingly!!

Patterns used:
I used the Anniversary Top pattern by George & Ginger (affiliate link) for the top, and I used the free Wide Leg Pants pattern by So Sew Easy, which I’ve used a few times for pj bottoms (and also once to make some Palazzo Trousers with a woven fabric because I’m a dumb*ss and didn’t realise it was for knits…duh!!!)

See ya next time and Happy Holibobs!

That looks soooo comfy! I love the wide legs.

Everyone knows how classy a pin-striped suit is! This turned out great and will definitely see you though into the new year.

You look fantastic! Love the wide leg pants. The entire outfit looks perfect for lounging around, drinking hot chocolate and reading a book, or whatever you do to relax.

@gozer - Why thanking you!! Yeah I love a bit of leg flap in my pj trousers, feels very loungy. Being Christmas Eve, and having just finished doing some food preps for tomorrow I’m now ready to premiere them this evening along with a nice big glass of sparkling vino!!

Ha! I saw the keyholes and thought…my arms would get cold! Complete opposites for sure!