There's a Blue Character ornament Among Us!

For the very last claim of the 2020 Ongoing Ornament Swap, I snagged @Tapestry for a blue character ornament for her daughter. Now, I was unfamiliar with what this was or who this character was, but after doing a little research, I hope I did this (now I know, game) and character justice!

My first idea was to melt crayons into a glass bulb and then use a glass marker and draw this character. Once I made that ornament, I decided it was just not fancy enough, and decided to to another route.

One of the things I have loved the most about the swap is the array of different themes, but more importantly, the materials we have all used to make our ornaments. There’s been felt, papier-mâché, crochet, knit, painted, and more! I felt like I had big shoes to fill…being last claim and all! I wanted to do something fun, so I decided that I would be able to design this character with beads. Then, I decided that I could go ahead and use felt as his background. After all, it is a blue character.

I also wanted more than just bead around felt. I had an empty tape dispenser from double sided tape that is the perfect size. I wrapped it is a gorgeous blue washi tape that @GeekyBookworm was swooning over at the craft store over the weekend and I was convinced to purchase. I’m glad I did!

I cut out the blue character’s shape, then I put beads on wire as I wrapped it around his shape. I wanted it to be sturdy.

I attached him to the decorated dispenser, then added a paper background. I glued all over the back with hot glue to make it glisten a bit.

@GeekyBookworm drew the UFO that hangs below! 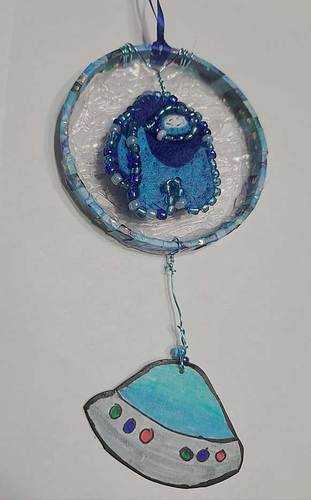 Close up of the blue character: 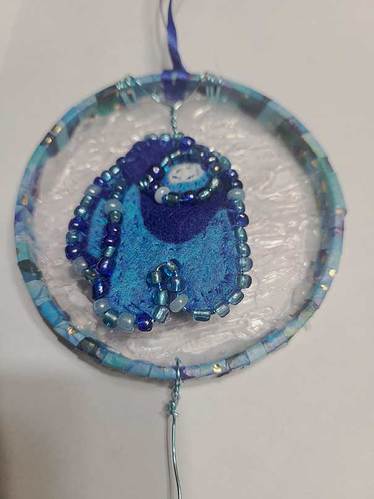 It turned out really good!!! AND CUTE!!!

I never would have guessed empty tape dispenser for the background! It’s such a fun ornament and so beautifully made. My daughter is in heaven and her brother is terribly jealous. I told him the glass ornament is his

Thank you again for your generosity, beautiful work, and for wrangling the best swap!

This is the coolest! I love all the different techniques that are packed into one small ornament. The beaded figure is fabulous and I also love the dangling UFO.

And yes, thanks for coordinating this massive and wonderful swap!

Haha…my son and his friends love this game! Your rendition came out great!!