I was soooo happy to participate in this last TM Patch swap (even though I was late; so sorry!!), because I haven’t made or received them in AAAAAGES and they are genuinely one of my absolute favorite crafts! Also, I’m going to need a lot of them to make the two separate notebook covers I have in mind, so if anyone ever wants to do a private swap for TM patches with me, absolutely hit me up!

Anyway, here are the two I made for JoyfulClover, who likes aliens and robots. 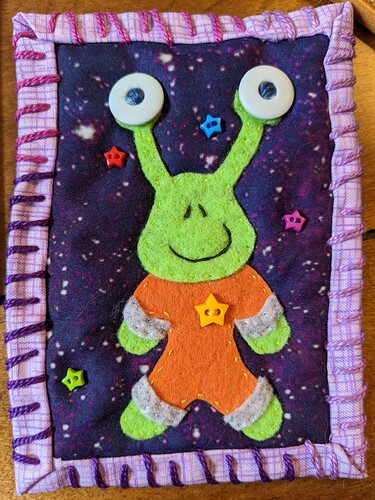 PXL_20220303_1819586951920×2560 706 KB
Both of these I just totally made up as I went along. For the alien I at least drew a quick sketch on paper and made myself a little stencil, but it’s not consciously based on any particular pop culture alien or anything. I was excited to get to use some more of that space fabric; I had to get some space fabric in a hurry a while ago for another swap and wasn’t going into stores at the time because of pandemic, so I ended up getting a wall tapestry of space and just cutting it up! It’s a little more slippery than the quilting cotton I usually used but ended up working out great! I still have loads left for more future spacey projects. 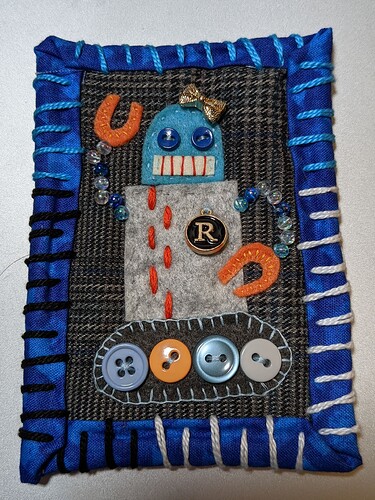 PXL_20220304_0317080161920×2560 835 KB
This robot I didn’t even make a stencil for; I just picked up the felt and started cutting. It’s also one of my favorite TM patches I’ve made. I had SO much fun adding each detail one at a time as they occurred to me. It wasn’t until I’d sewn on the felt for the body and head that I decided to make a treadmill for the bottom, mostly because I hadn’t left myself enough room for legs.

At that point I was using mostly just blue and grey, but when I was picking out buttons I liked the contrast of the orange, so ended up carrying that through the rest of the design as well. For the arms, I decided more texture would look great with the buttons, so I pulled out some beads. And it’s always fun to have a reason to use my other random notions, like the little bow on the head and the “R”. I’m so glad you like it, JClover; it was hard to part with!

Next, here are the patches I made for marionberries: 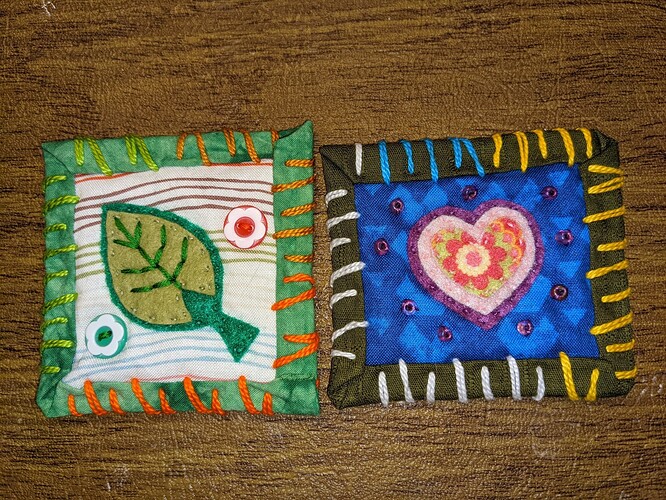 PXL_20220313_0201061021920×1440 591 KB
These were a challenge for me, since she wanted small patches, just 3x3". As you can see from the slightly rectangular shape, I didn’t get the measurements exactly right, but I tried! Since I tend to do felt applique and I can only cut it so small, it took me a while to decide on designs. But a couple of her themes were “hearts” and “details from the forest,” so I thought those would be the easiest to do in this small form. I didn’t want to make them too plain though, so I added some buttons and beads to these as well.

I had a ton of fun crafting for both my partners, and I LOVED the patches I got in return as well! If people can forgive my occasional lateness, I can’t WAIT for another round of this swap!!

Those robot roller feets are so cute & clever! I have some patches from you that I just love, you’re great at designing & making them.

Awww, thanks so much! Yours still make me smile as part of my sewing machine cover! I really love the craft because each patch is like a little work of art with each individual crafter’s style in it and they come together to make patchwork with so much personality!

Your gumball machine on popcorn background & sunny flower patches are on my sewing machine cover (totally inspired by YOU!).

Have you posted that cover here? It’s epic.

I can’t remember if I’ve put it up on LC! I should check!
Sadly it doesn’t fit my new sewing machine as well as it did the one I made it for (which I had to replace because it just broke in too many places to make it worth repairing), but I’m still using it! It just sags a little now.

Maybe I should make a plastic or cardboard frame to put under it? Hmmm…

Great idea, or cardboard. It won’t show & that stuff’s free!

These are so great! That robot is so cool. And i love the button accents on the alien!

Oh, I so love both of these patches. The space background is just perfect! And the robot is genius, just fabulous!

The robot and the alien are so cool!

Both sets are amazing. I love that robot so much. Very cool and full of fun details. I know your partners had to have loved them.

Squee!!! The robot and the alien are all mine!!! I love them so!

If people can forgive my occasional lateness, I can’t WAIT for another round of this swap!!

And I have no problem with lateness. Just as long as we’re all still here, making.