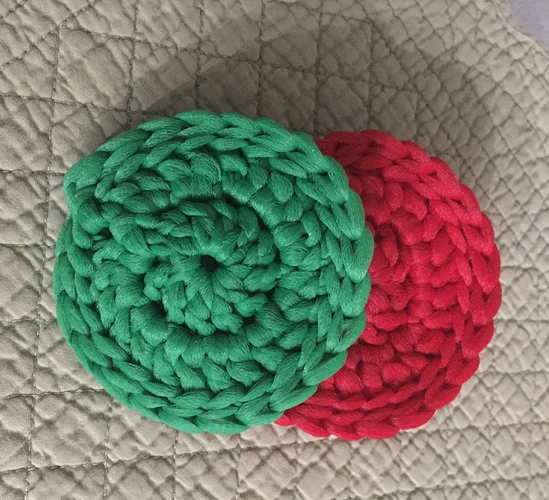 These are quick and easy to make, and they work remarkably well! I use tulle that comes on a roll and a large hook. I made a bunch at Christmas, and then got a request for another one (that I gave away before I took a picture… but it’s the same green).

Make a second one, but don’t fasten off after the second round.

Tie the 2 halves together using the tails using a double knot (this gives it a little extra puffiness, too). Trim off the excess tulle.

Fasten off and weave in the tail.

It usually takes me just over a half an hour to make each one.

Awesome! Thanks for the tutorial.

Very nice! And such a useful thing, too. I have a similar one I got somewhere, and I run it through the dishwasher every once in a while (top rack only). It has held up fine so far. Thanks for the tutorial; I may have to make myself another one!

Here are 2 more! They came out a little bigger than previous versions because I used a slightly taller spool of tulle, so the “yarn” was a bit thicker. 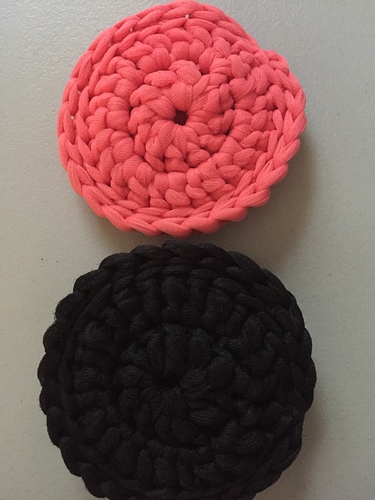 These are quick and easy to make,

HAH!!! HAHAHAHA! Yeah right. Heh. Just joking. Seriously, if I could get the hang of crocheting, I’d love to make some of these. I have some yarn called Scrub-ology and the best I’ve done was a double sided knit.

Knowing me, though, I’ll try again (after our repairs are done and I have more space to throw the crochet hook across the room, and find it,

You should definitely give crochet another try, especially if you want to design more creatures! I think crochet is easier to use for 3D objects (just like knitting is better for fine, lacy objects).