I can’t believe I forgot to post this! TheMisterT and I planned this together over a few months: a TV dinner-/school cafeteria-inspired Thanksgiving dinner. 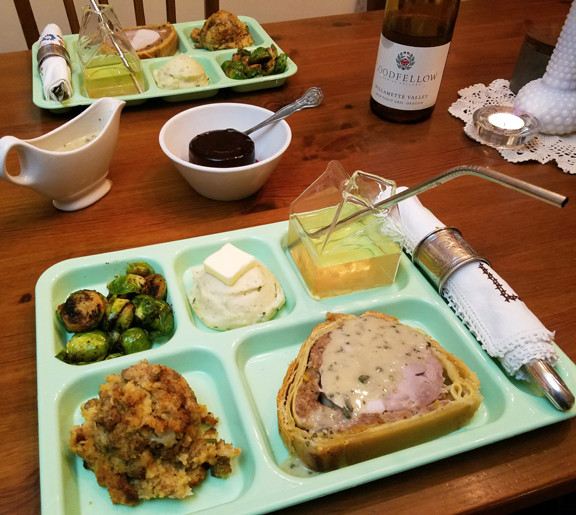 What I did: helped plan the various components including the groceries, procured the various special items, made the cornbread stuffing (but did not bake it), riced the potatoes, made the dessert, took the pics.

What TheMisterT did: planned the meal and made the grocery list, made the turkey wellington, most of the mashed potatoes & the gravy, made the cranberry sauce in a repurposed can, made the charred honey mustard brussels sprouts, chose the wine. 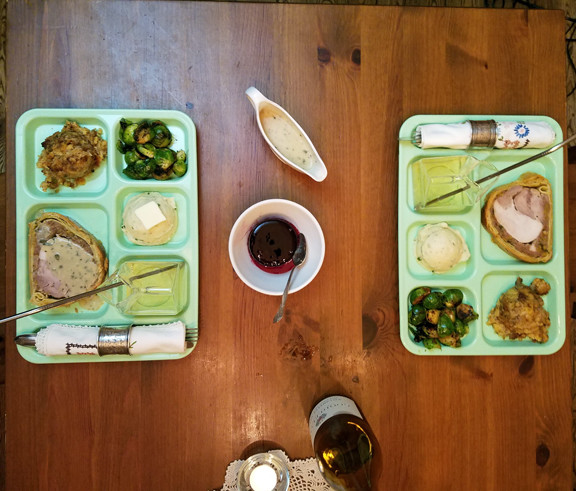 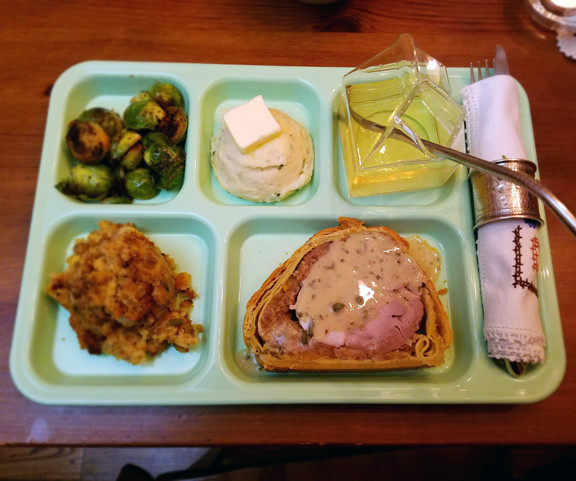 We had talked about similar projects before, so I had gotten him 4 of the trays for his birthday in the spring. When we knew my mom and her bf weren’t going to be able to come out for the holiday we decided to do this and I picked up a couple of the glass milk cartons. 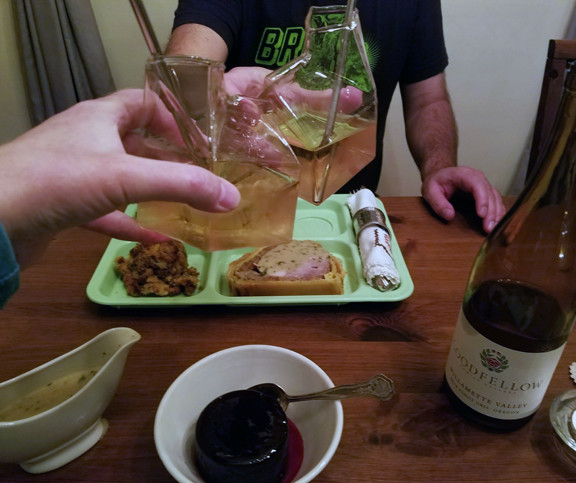 I made sure we were able to use white ceramic serveware for the gravy and the cranberry sauce. For the flatware “rolls” I used family silver napkin rings and embroidered linen napkins around silverplate flatware. And I picked up a big scoop so that the stuffing and the potatoes would be spherical! 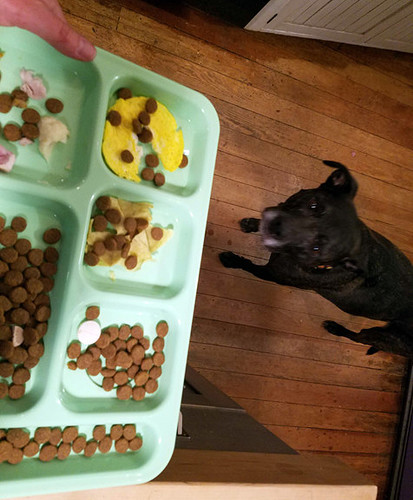 Even though she does not eat at the table with us, Delia is a full-fledged family member and as such received her dinner on a tray, too! With her meds, some turkey, and the remnants of the eggwash, microwaved for safely. 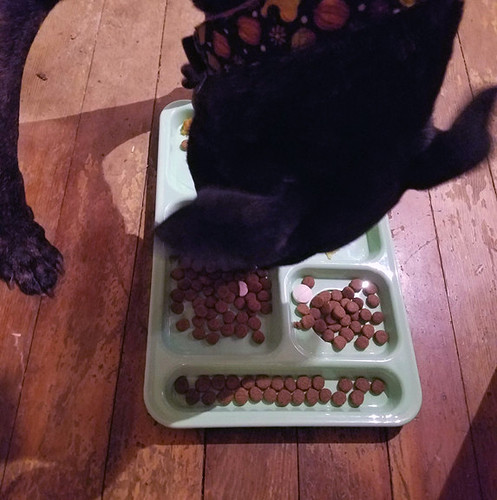 Dessert was a layered pumpkin bar that might’ve been about as much work as a semi-complicated pumpkin pie! Served on white ceramic with glass covers made from overturned pyrex-style storage containers. I wanted something that could be rectangular. This was the first time I had ever piped fresh whipped cream! 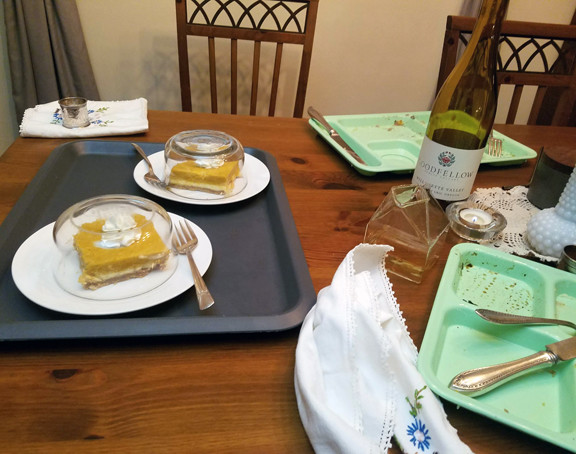 Eric’s close friend is the vintner of the wine we chose.

Our creative endeavors rarely overlap, so it was extra fun to work together on a project! I posted on IG and was almost expecting some backlash, because people can get very opinionated about what (everyone’s) Thanksgiving Dinner should be. But there has been a lot of love! Not viral or anything, but still

EDIT: What I didn’t get in the shots was the bud vase with a few carnations in it that was set on the (real, family) doily next to the little tea light candle.

What a fun idea! I love all the cafeteria-style packaging. Weirdly, I was just looking at buying cafeteria trays as a Christmas gift!

This is such a cool idea. I love your attention to detail!

Well, now I need glass milk cartons in my life…

This totally deserved to go viral my friend!

Thanks so much, y’all! It was so fun to geek out with TheMisterT on all the details AND it was delicious!

Weirdly, I was just looking at buying cafeteria trays as a Christmas gift!

These were a gift to TheMister for his spring birthday!

Well, now I need glass milk cartons in my life…

They’re fun, aren’t they? They seem a little thin, but I think that’s just because we’re used to such a thing being waxed paper and so un-fragile. They’re thicker than a wine glass.

Those glass milk cartons are so awesome! What a fun idea!

This is pretty fun(ny)!

This is utterly awesome. Eff the haters. They just have a case of the sposdas. A new tradition is born?

Love the collab, too!

What a fun idea!

Thanks so much, friends!

Luckily, there were no haters! At least none that let themselve be known to me. At worst there were a few people we texted pics to that didn’t get it and were unconvincing in their pretending to.

Oh I completely misread your comment to say there WAS backlash. Even better - go you guys!

Another nice thing is that a few people to whom this was described and who I would not have expected to enjoy it were pleasantly intrigued or even tickled.

This is so much fun, I love it!

I love the idea of this, so kitchy and novel. My only complaint is that if I were a guest, my tray would have been heaping over…but that’s what 2nds and 3rds are for