Use All The Bits - Apple Edition!

After acquiring a bushel of semi-good apples (they had been stored for a while and were no longer the best for fresh eating), I set out to salvage as much as I could! My first task was cutting out the brown, spotty, or very soft parts - these went into a gallon jar with water, sugar, and a splash of starter to ferment into apple cider vinegar. 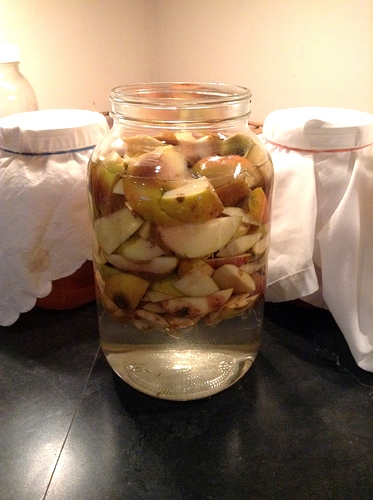 This jar will be covered with a cloth like the ones behind it (which are kombucha). If you’re looking for a guide for ACV, I recommend the post on Homestead and Chill. 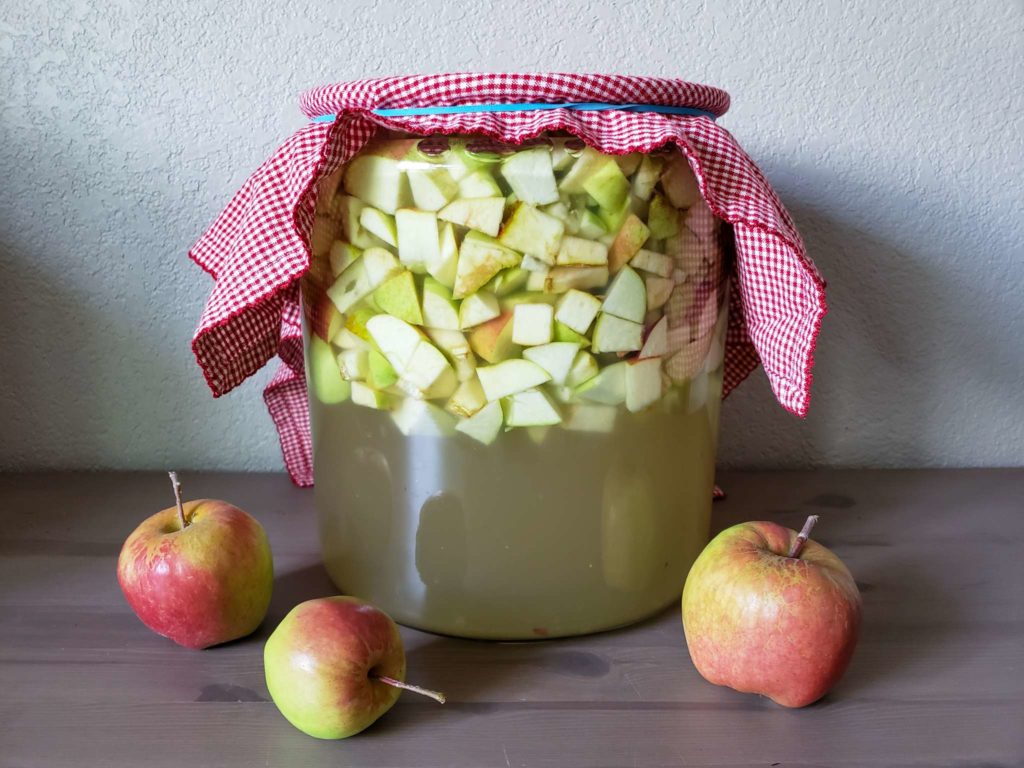 Next, the good apple chunks were roasted for 1 hour in pans covered with foil (and a good glug of water). After cooling, I ran the apples through my food mill/strainer kitchen aid attachment and reserved the baking water. 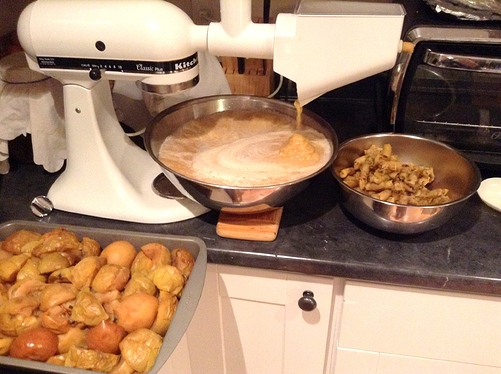 The resulting sauce I heated to a good boil and water bath canned - first processing 3 quarts + 2 slim jars of basic sauce, and then adding frozen raspberries and grated fresh ginger to the rest. That got me 8 pints of pretty pink sauce. 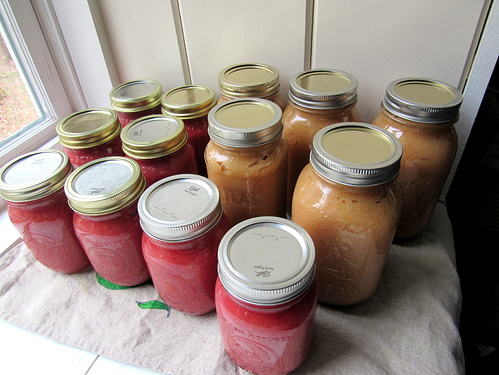 IMG_9907.JPG3258×2443 1.62 MB
I could have stopped here and felt fine about it… but the bits that came out of the food mill still looked like they had some good stuff to them, and I had saved that baking juice, so… 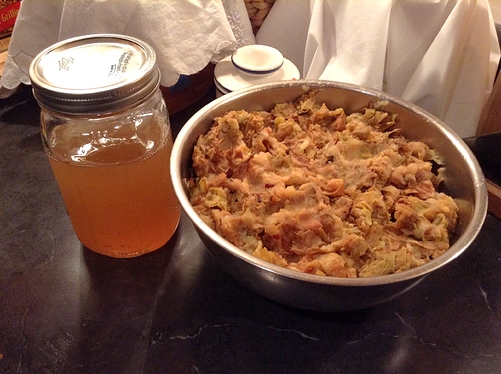 Into the pot they went, with a few more cups of water, a cinnamon stick, and a vanilla bean husk. Simmered for an hour (covered, didn’t want to lose any liquid yet) and run through the mill again. This time, the discards were much more dry and I was satisfied that I had worked them enough. 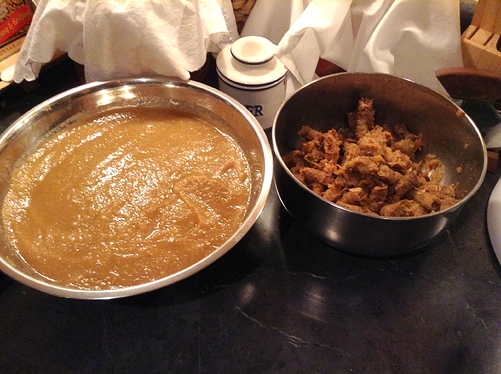 Now this secondary sauce I brought to a low boil and added 1 cup of maple syrup, a 1/2 tsp of vanilla paste, 1/4 tsp(ish) fresh grated nutmeg, 1/4 tsp fresh ground cloves, 1/4 tsp ground ginger, a pinch of salt, and a dash of ground allspice.
Simmering for about 2 hours, with frequent stiring, the volume reduced by about half. After a final pass with a stick blender to get it as smooth as possible, I canned 5 pints of delicious spiced apple butter. 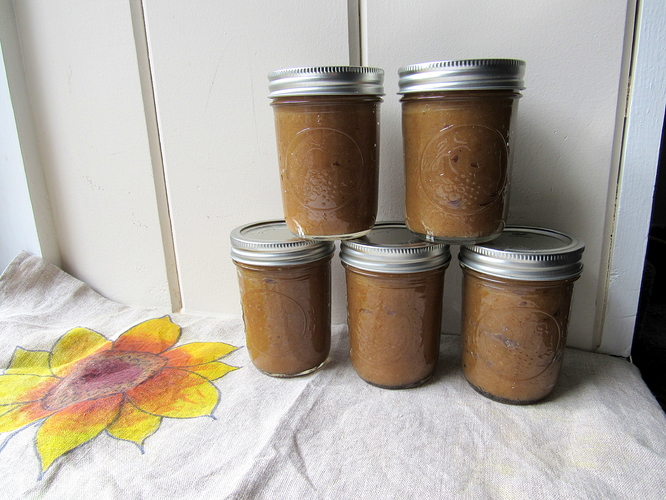 Now I can rest… except for that other half bushel I still have in the fridge… anyone have a favorite appley baked good they want to share? 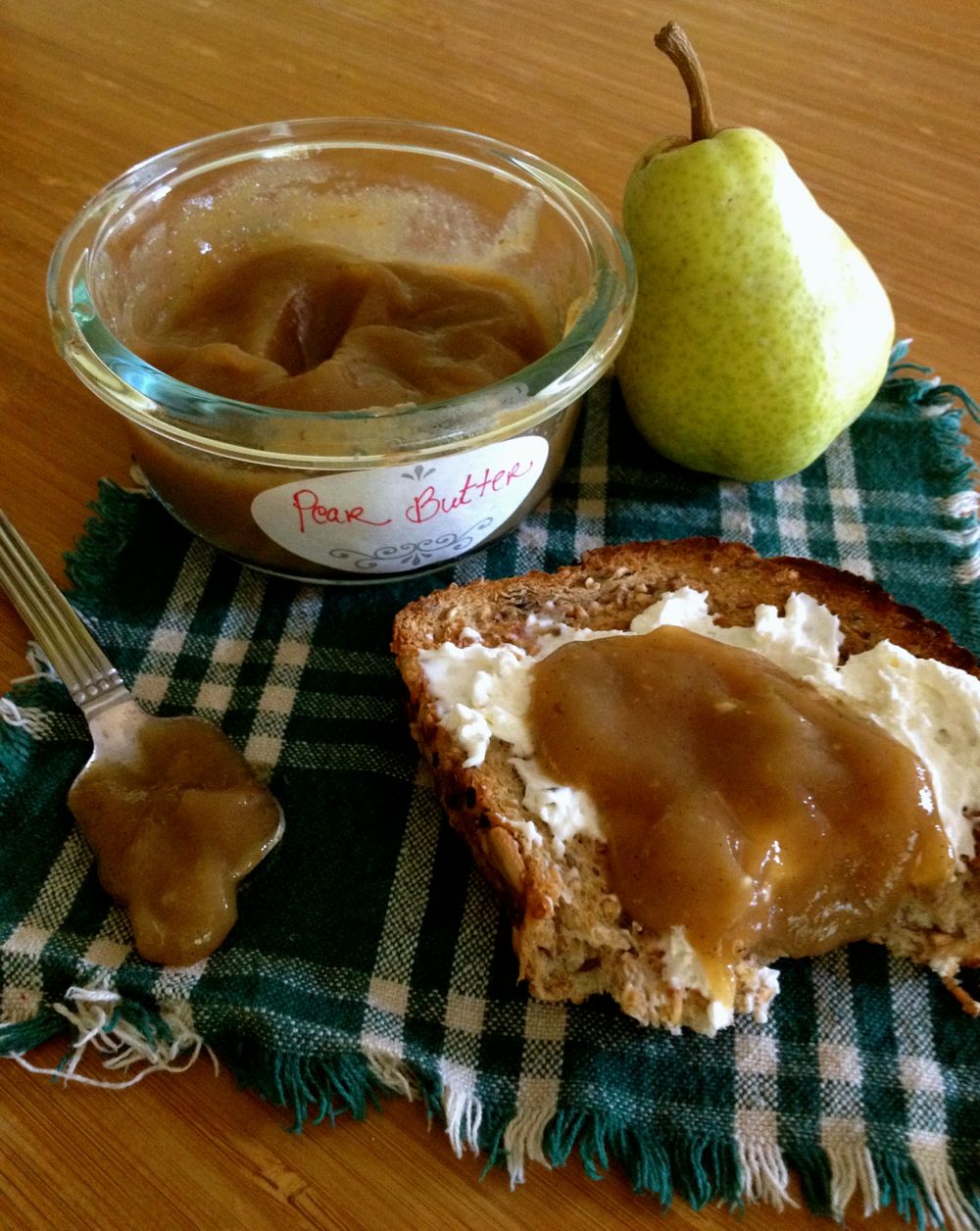 Maple pear butter made from the skins and cores of pears left over from canning.

Lots of apple-y goodness! I can just smell the yum!

These all look so good! I’ve never made applesauce before - you make it look so easy!

Way to go, making the most of that gift! Well done.

I am so impressed by your grab-the-apples-by-the-stems go gettin’! Well done!
In answer to your recipe request, I don’t know if this will fly for you, but these are a BIG hit around my house:
Apple Crisp Shortbread Bars

Words! You sure did get a lot out of some almost bad apples! Very impressive and everything sounded yummy, well, except the vinegar. I don’t think I would describe vinegar as yummy. But I do like vinegar so maybe I would. Lol.

Oh man, that spiced apple butter sounds amazing!! Way to find (or make?) the goodness in every last bit!

I’m impressed! I especially like how you dealt with the food mill leavings. It always seems like a waste to chuck it all, so I love your clever idea to sauce them up a bit before turning them through the mill again. And, I’m glad you posted your apple cider vinegar in the works because I have had some farm share apples sitting in my fridge for a while, and I’ve been meaning to use them for vinegar- if I splash a dash of Bragg’s apple cider vinegar into the jar, does that work as a starter?

And @AntBee, thanks for that recipe- it combines 2 of my all-time favorite desserts!

And @AntBee, thanks for that recipe- it combines 2 of my all-time favorite desserts!

Wowee wow wow! Now I wish I had a mill! I’ve never done any proper canning, but man, I gave got to start. Also, as a fellow I-can’t-throw-that-it’s-still-got-some-lifer (

), I appreciate you going back for the apple butter. Really. Good work.

I always just end up making apple crisp or pie. Or turnovers, if I feel like making puff (or rough puff) pastry.

Thank you everyone for your comments! I’ve been eating the apple butter on toast (or sliced poundcake) and it’s super tasty.

OK adding this to my to-do list next week, wow!

if I splash a dash of Bragg’s apple cider vinegar into the jar, does that work as a starter?

That would be the perfect starter!

This is a plethora of appley goodness, wow! I have a similar mill, it’s a juice masticator with variable pressure. I could do this with the waste leftover from making crumbles. I usually get a half bushel of apples and fill the freezer with 20 or so small loaf pans of various apple based fruit crumbles. There are a lot of cores and skins that go into the compost. I love apple butter, the kids not so much but they can have the crumble and I’ll save the spread for me!

OK I made the shortbread bars today and they were very well received. YUM!