After completing my Humpty Dumpty puppet for an upcoming production of Alice in Wonderland, I went back to finally tackle the White Rabbit. His head was the first thing I made after signing on to do puppets, and then it went to the theatre and I kind of stopped thinking about it. Whoops!

Unfortunately I took no progress shots (pity, as it was an interesting fly-by-the-seat-of-my-pants experience) but I did snap a couple after he was together.

Here’s the head, how he lived for a good couple of months… made from foam, foam core, bits of donated fabric, and an old fluffy blanket. The ears are wired so they’re bendable. Eyes were just pinned for placement at this point. 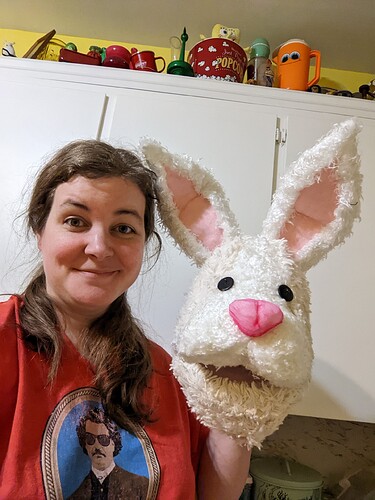 And finally yesterday I hunkered down and built him a body!

His main body is a backpack stuffed with packing peanuts. His vest is just a front, some fabric I got when a local upholstery shop went out of business. The blazer was a thrift store find. Legs were made using a slipper boot pattern, then angling and lengthening the legs. There are stirrups on the bottom so the actor hooks them to his shoes. One of the hands also functions as a glove, so that he may use it to hold things, gesture, etc. The head is separate, but I am debating tethering it. I think I’ll leave it loose for flexibility.

When I dropped it off at the theatre the other day, the actor immediately got right into it and was a total natural. I am so excited to see him perform. He was telling stories to the cast but moving the rabbit’s mouth without even thinking, it was a hoot. 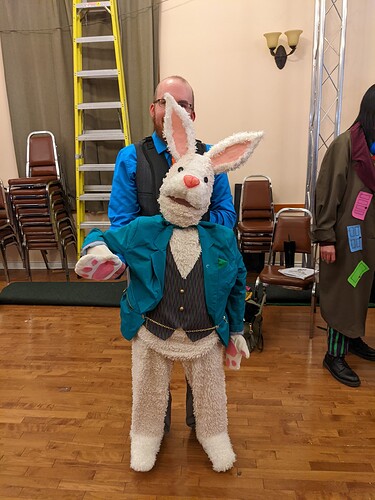 I completely forgot to take pictures of the Cheshire head before delivering it, but once the tail is done I’ll try to get a shot of the whole shebang!

Oh My Gawp woman, this is THE MOST AMAZING THING I’VE EVER SEEN! You are incredible, wow.

This is fantastic! You are amazing!

WOW! Amazing! Hope you upload pics of the Cheshire Cat, too.

Incredible!!! The head was wow and then you showed the body and I was like WOW! LOVE seeing the actor using it! That’s the best compliment!!!

This is crazy amazing!! The things you create from an odd assortment of random stuff - mind boggling!

He’s great! I love him propped up on the armchair, he looks like he’s lounging in a gentleman’s club.

I really love how you put him together - backpacks, slippers, blankets!

HOLY COW! How creative, resourceful and amazing! He’s so cool!

This is incredible! I am loving everything about it. This play is going to be a masterpiece, just like your creations!

Congratulations! Your fantastic project is one of this week’s Featured Projects!