Note: This is reposted from Deadster, as so many of us are home during pandemic, and might have time to make homemade holiday gifts. 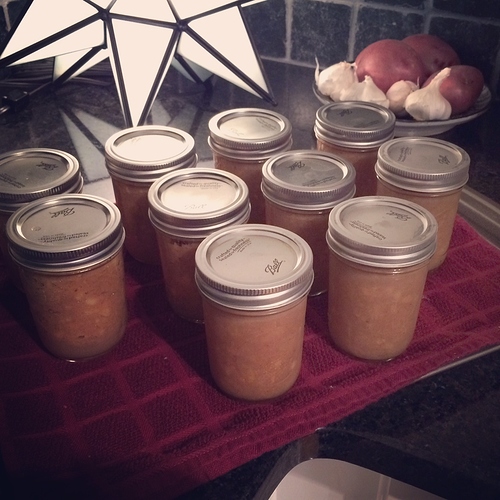 Bananas Foster is a fantastic dessert. One that sadly, I can’t enjoy anymore since it’s normally served with ice cream and I’m lactose intolerant. But I’ve found a way to have my bananas and eat them too! The recipe came from a magazine from BH&G called Canning, Preserving + Freezing + Drying which came out in 2014, and doesn’t seem to be available anymore. It was reprinted in Better Homes and Gardens Complete Canning Guide: Freezing, Preserving, Drying.

I’ve now made 3 batches, (15 jars) and for my third go I decided to tinker with the recipe a bit. I personally like cinnamon, but I hate when it’s overused, so I’ve reduced the amount called for to let the banana and brown sugar flavors shine through. If you can’t get enough cinnamon, I’ve also seen the recipe posted on a blog in which that person doubled the cinnamon with good results. And while I like nutmeg, I generally prefer allspice, which has a bit of clove flavor to it without being quite as strong as ground cloves. I’ve posted my new version below, which was adapted from the original. It tastes amazing, and even better it’s very cheap to make. The bananas came to all of $4 for 2 batches, and the rest of the ingredients were all things I had around the house.

If you’ve never tried home canning before, this would be a great recipe to learn with. The directions are simple, and you won’t have to spend hours chopping produce like you would for salsa. Be sure to read up on all the basics first though!

FreshPreserving.com has lots of help for beginners.

Oh thank you! I remember you sent some of this to me and it was SO good! Now I need to try making it.

Yum yum yum!!! I will make this this weekend. Thanks for reposting.